Lessons from the Leaders of Social Influence

Part 2: Five Brands that Excel at Both Online and Offline Social Engagement

Last week we talked about the 45 brands that achieved strong performance both offline and online, placing them among the top 10% of all brands we measure. Their ability to activate consumer engagement via both channels is powerful and drives millions of dollars to their topline. These brands that command consumer conversations achieve “social success” through a variety of methods. To illustrate that point, we’ve selected five brands that were “Conversation Commanders” before the pandemic and remain so in 2020.

Amazon gets a lot of attention for dominating the retail landscape, particularly during the pandemic. It also is a commander of the American consumer conversation. Amazon is the third most talked about brand offline—behind only Apple and Walmart—and the seventh most talked about online. Since the pandemic struck, Amazon’s volume has risen both offline and online.

The chart below shows scores of between 0 and 100 on four dimensions—volume, net sentiment, “brand sharing,” and “influence.” Each of those dimensions is measured in offline conversations and in online social media. The scores are derived to compare a brand’s performance on a metric to nearly 650 other brands performed. A score of 100 is the maximum, 50 is about average, and 0 is the lowest possible score.

Despite Amazon being a brand of the digital economy, it performs more strongly in everyday, offline conversations than it does in social media, with an overall offline score of 75.2 and an online score of 56.4. This pattern is particularly evident when it comes to the net sentiment of conversations, for which Amazon scores much higher offline (70.2) than online (44). Indeed, for every dimension measured, Amazon’s offline score is higher than the corresponding online score, despite the brand’s enormous online footprint.

This is consistent with a pattern we have seen throughout the growth of the digital economy. Increasingly, consumers talk offline about the things they see and experience online. It’s long past time to think in terms of two separate worlds, digital and analog. Powered by mobile technology, the two worlds are almost fully blended now for consumers; they should be for brands, as well.

Several athletic shoe brands are Conversation Commanders, including Nike and Adidas, thanks to highly successful efforts to make themselves the centers of conversation and the larger culture. We have written previously about Nike, in particular.

The Vans shoe brand has also achieved Conversation Commander status while being deeply imbedded in a more niche culture: youth skateboarding. As proof of the brand’s targeted focus, a recent commercial includes the comment, “Everything is so much better when you are like, young.” They’ve remained a youth brand despite being around for more than five decades, having achieved notoriety in 1982 when a young Sean Penn donned a pair of Vans in the movie Fast Times at Ridgemont High.

The focus on youth means the conversation is really limited to people under 30 years of age, producing relative low “volume” scores for Vans, in contrast to Amazon or Nike. It’s difficult to generate a lot of conversation when you are just speaking to a slice of the consumer market.

But, those who talk about the brand love it. The brand has extremely high net sentiment scores for conversations occurring both offline (72.6) and online (72.9), with an 18-pt increase in online sentiment, compared to last year.

One thing that has changed in recent months is the amount of “brand sharing” related to Vans. Consumers talking offline about Vans are increasingly likely to talk about advertising and other brand content they have seen, particularly digital content they talk about offline. The consequence is that the offline brand sharing score has jumped from the mid-range of 40-60 points up to a score of about 90 since early May, as shown in the chart below. 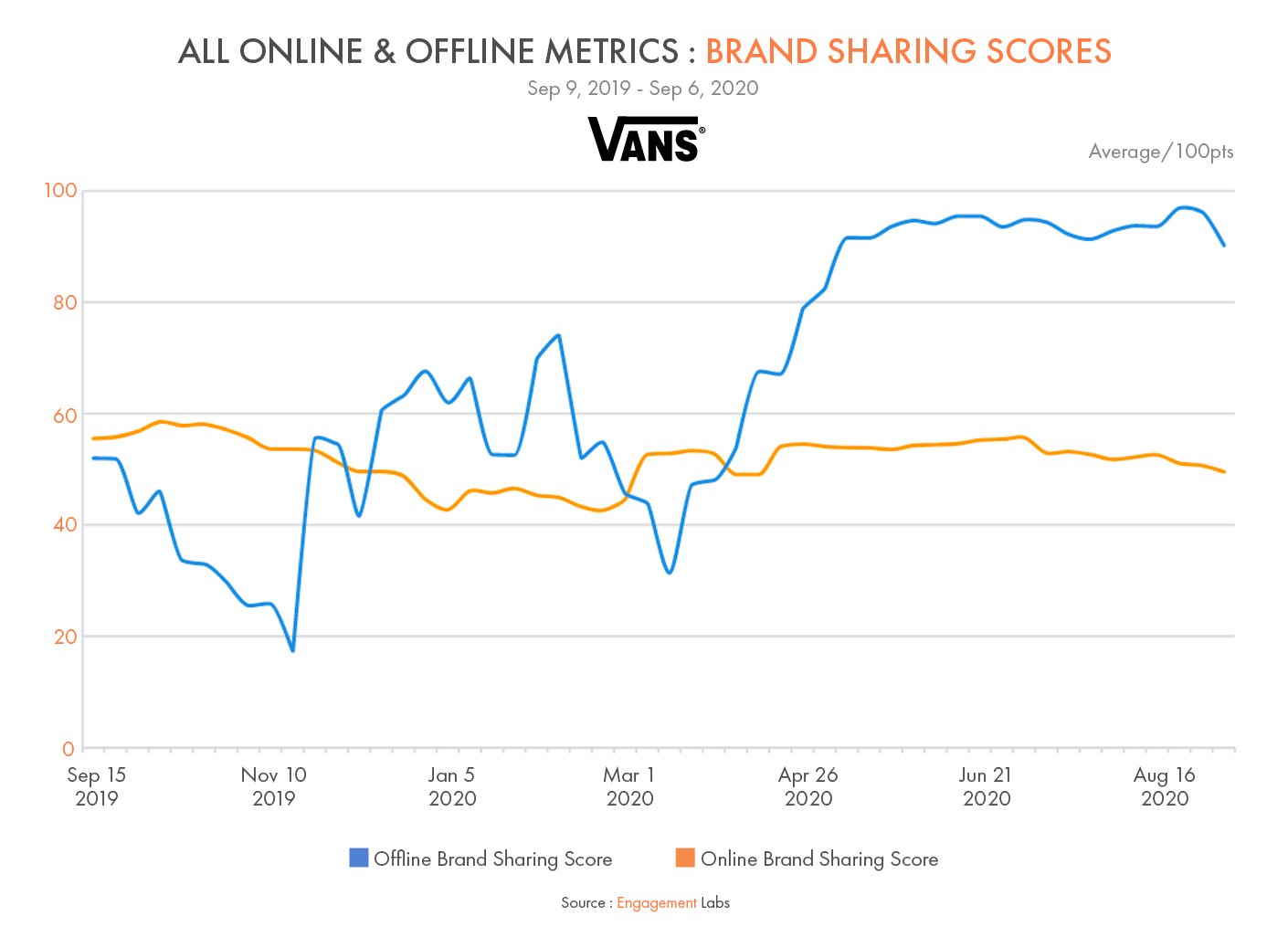 The rise corresponds with pandemic and social-justice initiatives of the brand, including a campaign called “Foot the Bill” that has empowered 80 small businesses to generate revenue while closed during the pandemic by designing and selling custom Vans products.

Budweiser: Commanding Conversation, Even Without a Bar Scene

Budweiser is the only beer brands that was a Conversation Commander one year ago and has remained so. Bud Light, Coors Light, Blue Moon, and Miller Beer have all dropped out of the Conversation Commander quadrant, while Samuel Adams has moved up. Budweiser performs most strongly on the online dimensions of brand sharing and sentiment, and the offline dimensions of sentiment and volume.

The erosion of word-of-mouth for beer brands has occurred primarily in the offline conversation metrics, likely due to the loss of public bars and restaurants as places where people consume and naturally talk about beer brands, and also due to the sharp reduction in professional sports during the first few months of quarantine, which normally provide powerful advertising opportunities both on television and in arenas and which in turn drive conversation.

Why has Budweiser retained its position? The main reason is that the brand’s offline sentiment has improved in recent months, rising to the top score among all beer brands during the first six months of the pandemic at 77.8. More recently, in July and August, the brand reached an offline net sentiment score of 89.3. The improvement is driven by its core demographics: affluent and middle-aged men. 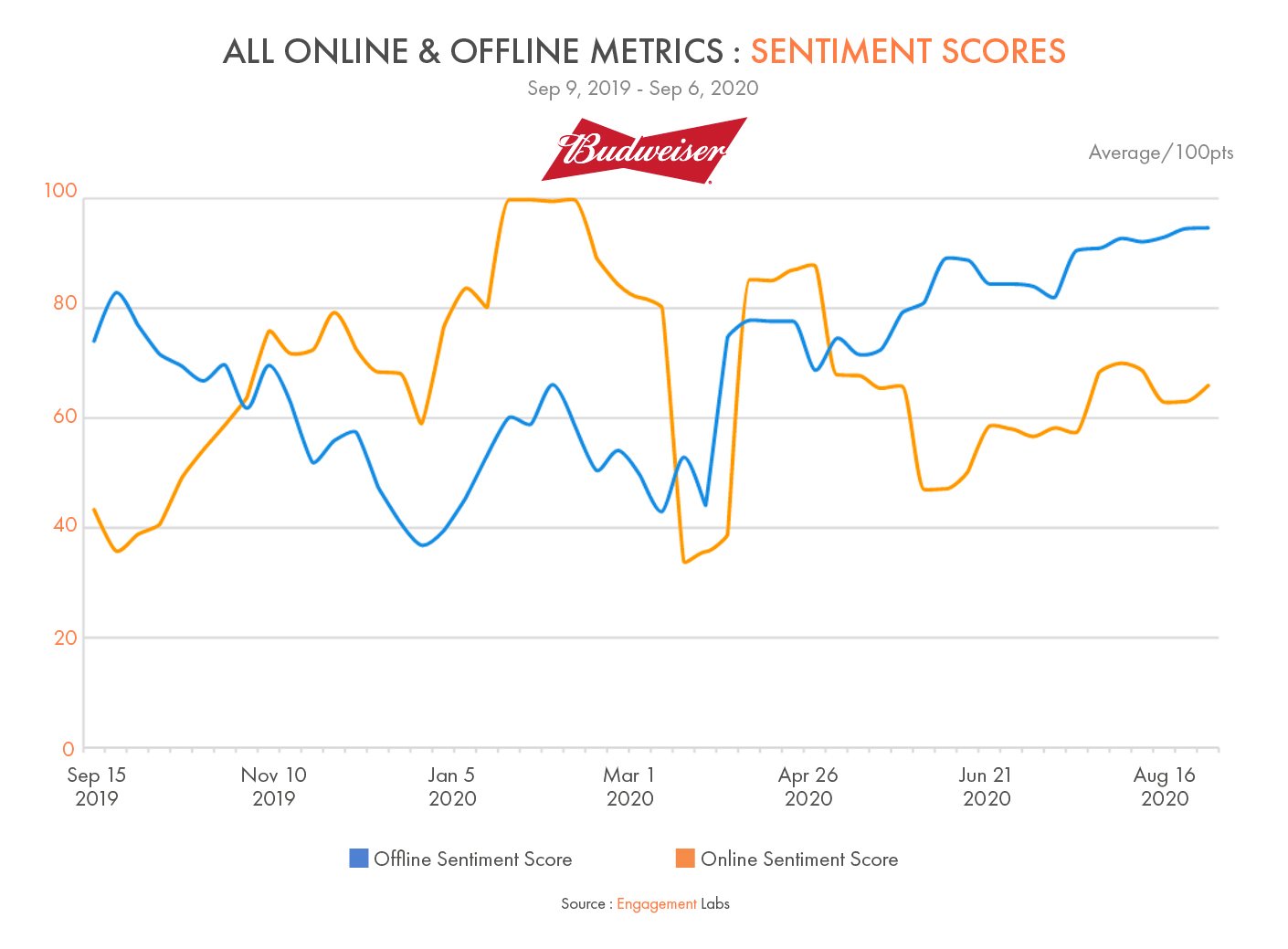 To what do we owe this love of the Budweiser brand? One part may be its association with the pandemic efforts of parent brand Anheuser-Busch, which converted some production to making hand sanitizer. The brand itself also reprised its 9-11 themed commercial in support of a nation dealing with a global pandemic.

But another possibility may be that the pandemic has brought on a sense of nostalgia for the lifestyles and brands of days-gone-by, including the “king of beers” that in America dates back to the 1850s.

Media brands have a built-in advantage over other brands when it comes to driving conversations, because they are platforms for distributing engaging content that is meant to generate water cooler conversation and attract families to watch programs together. This is evident in the fact that media brands usually have high “brand sharing” scores, both online and offline, because of conversations generated by their content.

The Food Network is an example of a media brand that has retained its status as a Conversation Commander—thanks to the pandemic. Over the prior year, the brand’s offline conversation levels had been steadily eroding, hitting a low point in December 2019. The fact is, Americans have been forced to rediscover their kitchens, making programming related to food and cooking relevant in a way it hasn’t been for at least a generation.

The Food Network’s strongest measure is online “brand sharing,” ranking among the top 20 among all brands with a score of 80.6, thanks to its enormous popularity on Facebook.   The brand also enjoys a lot of love offline (sentiment score of 77.9) and online (73.7). It also scores very well among everyday influencers with lots of social contacts, both offline (78.4) and online (75.8).

Food Network’s only below-average score is offline conversation, an area that has improved recently, but could easily return as a problem once lifestyles change again.

Sephora: A Consistent Top Performer in Beauty but with Cautionary Signals

Sephora has been a standout performer in the retail and beauty categories, as evidenced by the brand’s performance in TotalSocial over the years. The brand was and remains a Conversation Commander, but that status may be at risk.

In the last six months, the brand performed enormously well on offline metrics such as offline sentiment (69.5), offline influence (69.2), and offline brand sharing (67.3), meaning consumers like to talk about its marketing and advertising content. Yet the brand’s offline sentiment has started to erode quite sharply toward the end of August, falling from consistent scores of nearly 80 to below 50.

The drop in offline sentiment follows months after several sharp drops in online sentiment in the wake of large scale layoffs that produced embittered employees and negative publicity. The biggest declines in sentiment have occurred among younger, lower income, and non-white consumers who may be the most likely to relate to Sephora employees.

Yet another factor may be shifting needs, with work-from-home trends during the pandemic reducing the relevance of beauty products. The decline in sentiment was more than 50 points among those “completely” staying home due to the pandemic.

While we often see online and offline trends operate independently of each other, Sephora may be a case where initial negative sentiment online foreshadowed what was to come in offline conversations.

We hope you will return to read the final installment of this series with brands that have risen to Conversation Commander status in 2020 that were not there a year ago. We will profile what is driving these rising stars.