The numbers swirling around Amazon Prime Day certainly fit the company’s big name. During its annual summer deals event, the e-tailer sold 100 million products in 36 hours – or $3 billion in sales of items such as Instant Pots, Fire TV Sticks and 23andme DNA tests.

That’s impressive no matter which way you look at it. Amazon launched Prime Day in 2015, but it has reached mythical proportions among shoppers. The media often describe it as “Black Friday in July,” and for Amazon, it has the same significant tangible value, as the event sets its results for the rest of the year.

Thus, it’s instructive to look at how Amazon has turned its invention into a significant shopping milestone, not only for itself but for its competitors as well.

Though just a few years old, Prime Day is now a major talkable event, and Amazon has been very successful in motivating consumers to talk about it.

Though just a few years old, Prime Day is now a major talkable event, and Amazon has been very successful in motivating consumers to talk about it. The ability to drive consumer buzz is a major factor in its success because there is a meaningful relationship between consumer conversations and sales. As we proved in a landmark study last year, consumer conversations – both offline (face-to-face) and online (social media) – drive 19 percent of sales,

There are several reasons Prime Day works so well. Amazon has designed the elements of the event in a way that generates significant consumer buzz in the weeks before, during and after the event.

News coverage. Amazon’s PR team must work quite a bit of overtime in the weeks around Prime Day. From the first announcement on July 3, every major news outlet covered the sales event, including CNN, USA Today and the New York Times. Amazon also garnered coverage in every top business, technology and retail publication as well as in local newspapers around the world. Most importantly, its PR team created sustained coverage – and consumer conversation – in the days leading up to Prime Day by sharing details of the best deals. 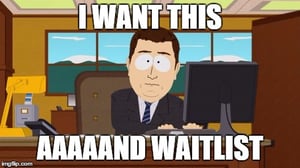 Value. Great deals, in fact, are the key reason shoppers visit Amazon during Prime Day. In any shopping experience, consumers love to talk about the deals they find, and the steep cuts on Prime Day make it even more talkworthy. Further, by making this event an annual shopping holiday, Amazon gives its customers a yearlong reason to talk about its brand. As consumers share their previous Prime Day experiences with friends and family, each time the event comes around, it gets a boost.

Convenience. Consumers also value and talk about convenience. By extending Prime Day this year to 36 hours from 30 hours previously, Amazon made it possible for more people to participate. This, in turn, spurred additional buzz about the sales event.

These tactics drove consumer conversations about Prime Day and contributed to its overwhelming success. In the week leading up to the sale, Amazon experienced a significant spike in online brand sharing, which is the extent to which people share the brand’s marketing content in social media. There was also a noteworthy increase in online sentiment, the share of social media conversation that is positive about a brand. Overall, offline conversations about the brand increased slightly from the previous week. Notably, the words “Amazon Prime” and “Buy” were mentioned frequently, indicating that consumers were talking specifically about the sale.

Moreover, in the week that followed Prime Day, Amazon’s online brand sharing score reached its highest point since mid-September 2017. Its offline brand sharing score, which measures the number of consumers talking about a brand’s marketing campaigns in face-to-face conversations, also hit its highest peak since January 2018. These records suggest that consumers were sharing Prime Day deals both online and offline. 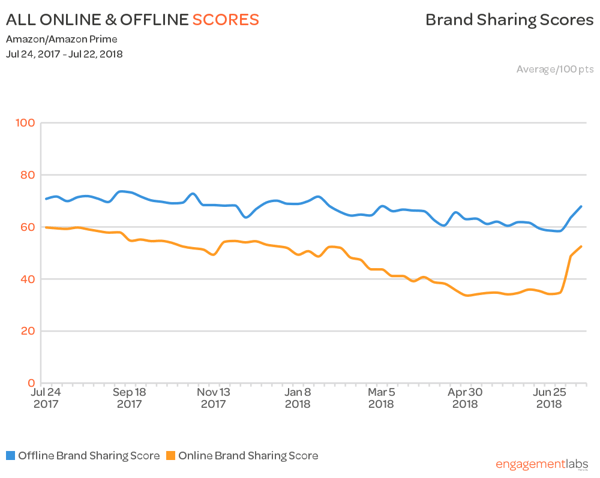 Yet, Amazon wasn’t the only retailer pitching Prime Day sales to drive consumer conversations. Other retailers used the same tactics and racked up higher sales as well. In fact, sales among larger retailers increased by 54% during the 36 hours of Prime Day, compared to an average Tuesday. According to CNBC, 30% more retailers were offering deals this year.

For example, both Target and Walmart held sales events coinciding with Prime Day. They too used PR to drive news coverage and promote the sale to their customers. By offering free shipping and slashing prices, they motivated consumer talk and enticed shoppers into their online stores.

Target’s sale was notable. The retailer saw an uptick in all of their offline scores, especially brand sharing. Online influence, which measures the extent to which an influential audience is advocating for the brand in social media, also rose. The retailer said “millions” of visitors shopped its site, making it the biggest online shopping day of the year for both traffic and sales. It’s also worth noting that 90 percent of the online orders were being fulfilled by Target stores, which means consumers not only visited the website but also came into the store.

Both Macy’s and Kohl’s held special sales in the lead up to Prime Day. Kohl’s promoted a one-day sales event while Macy’s held a weeklong “Black Friday in July” on its website.

Although Amazon is still the retail giant – it’s projected to earn a 50% share of e-commerce by the end of the year – these results show that other retailers can still compete.

To learn more about what retailers can do to drive consumer conversations and compete more effectively with Amazon, download our eBook.