Amazon's Offline Consumer Conversation is Soaring During Pandemic, and It’s Not Alone in Retail 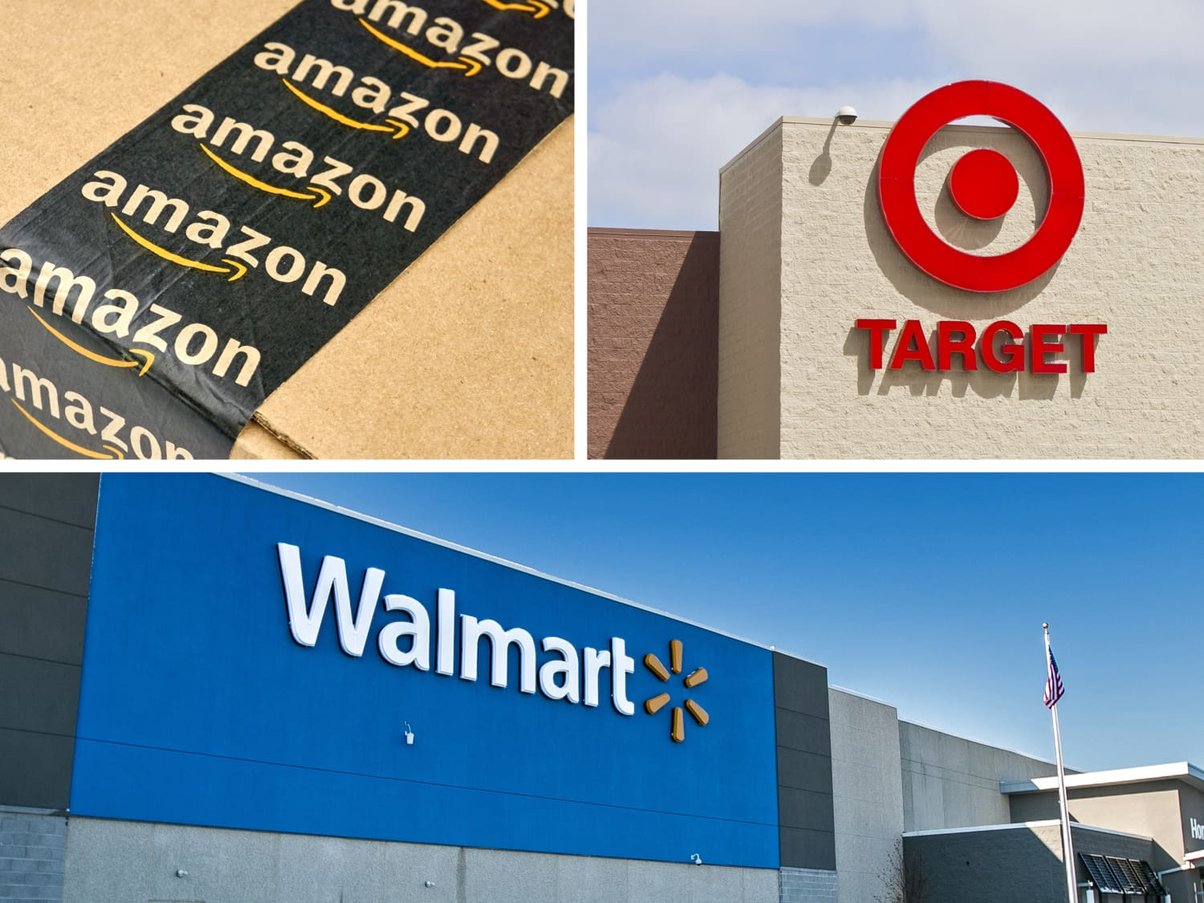 It looks like the pandemic is producing a retail industry apocalypse with the bankruptcy and/or retrenchment of venerable retail brands from Brooks Brothers to Lord & Taylor and from Pier 1 Imports to JCPenney. Yet the offline conversation trends suggest we’re seeing a tale of two very different retail landscapes, as discount merchandisers, home centers, supermarkets, drug stores – and especially Amazon – are earning a lot more conversation from consumers.

Consumer conversation trends—particularly offline conversations—provide a unique window into what’s happening in the marketplace, as the continuing pandemic has done nothing to reduce consumers’ enthusiasm for sharing opinions with each other about brands. Offline word-of-mouth is always an important part of the consumer decision journey, and especially during these times of rapid transition and change it helps consumers navigate their way through the new retail landscape.

Across all brands and in a diverse set of fifteen categories tracked by Engagement Labs, retailers represent one-third of the brands gaining the most offline conversation this year, with Amazon the biggest winner among them. For the weeks between March and August 30th, Americans have participated in conversations about Amazon 137 million times per week on average, up 46 million from the prior year. Only Netflix has gained more conversation volume during the pandemic.

Rising conversation patterns suggest that the purveyors of necessities such as food, cleaning products, and medicine are benefiting the most, along with “nest feathering” retailers such as Home Depot.

Indeed, when you look at what has happened for different types of retailer companies, discount retailers are up the most, followed by hardware and home centers, supermarket chains, and athletic stores and brands, as many Americans have equipped themselves for individualized outdoor exercise and recreation such as bicycling, hiking, running, and walking.

Supermarkets and drugstores have joined the upper echelon of word-of-mouth retail brands thanks to consumers’ increasing appreciation for brands that give us our daily bread, our milk, and our sanitizers. Kroger offline conversations are up 10.8 million impressions per week, or 38%, followed closely by CVS (up 8.4 million, 31%) and Walgreens (up 7.2 million, 23%). Starting from lower levels of conversation, the trendy supermarket brands Whole Foods (up 4.7 million, 49%) and Trader Joe’s (up 4.7 million, 36%) are up sharply. 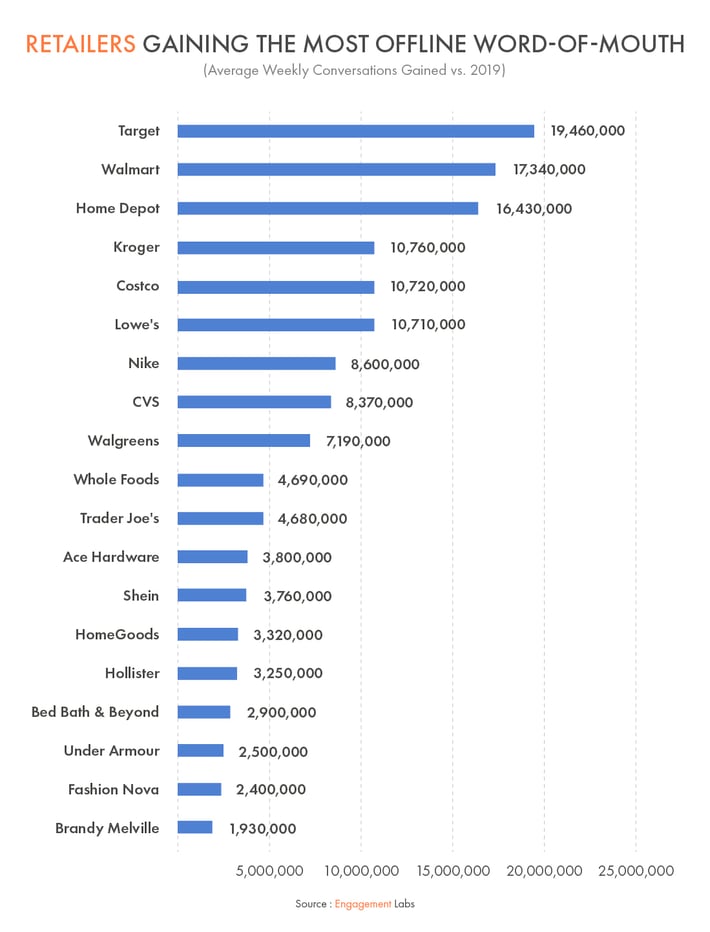 At the other extreme, we are seeing enormous declines in conversations about department stores, specialty stores, and apparel brands, consistent with the recently announced bankruptcies and closures of venerable brands such as Lord & Taylor, Nordstrom, JCPenney, J. Crew, Brooks Brothers, and Pier 1 Imports.

A few retailers are gaining word-of-mouth against type. The China-based fast-fashion brand Shein has enjoyed a 3.8 million increase—fully 221%—in offline word-of-mouth conversation, thanks to an enormously popular eCommerce app favored by the talkative Generation Z. Similarly, the California-based Fashion Nova brand has seen conversations rise of 2.4 million during the pandemic, 160%, by focusing on a youth-oriented eCommerce strategy. And Brandy Melville, in the same niche, rose by 1.9 million conversation impressions, an increase of 275% from a year ago!

Amazon vs. Walmart vs. Target

The rivalry among Amazon, Walmart, and Target are revealing to evaluate in the context of the pandemic. A year ago, Walmart enjoyed far more conversation volume compared to Amazon, with about 300 million weekly conversation impressions, versus less than 200 million per week for Amazon. But that gap has been steadily eroding, roughly cut in half. This shift provides a compelling argument for Walmart’s new Walmart Plus membership to compete with Amazon Prime, and Walmart’s courtship of TikTok in partnership with Microsoft.

Although Target conversations are rising, the brand’s volume still lags both Amazon and Walmart by large margins. 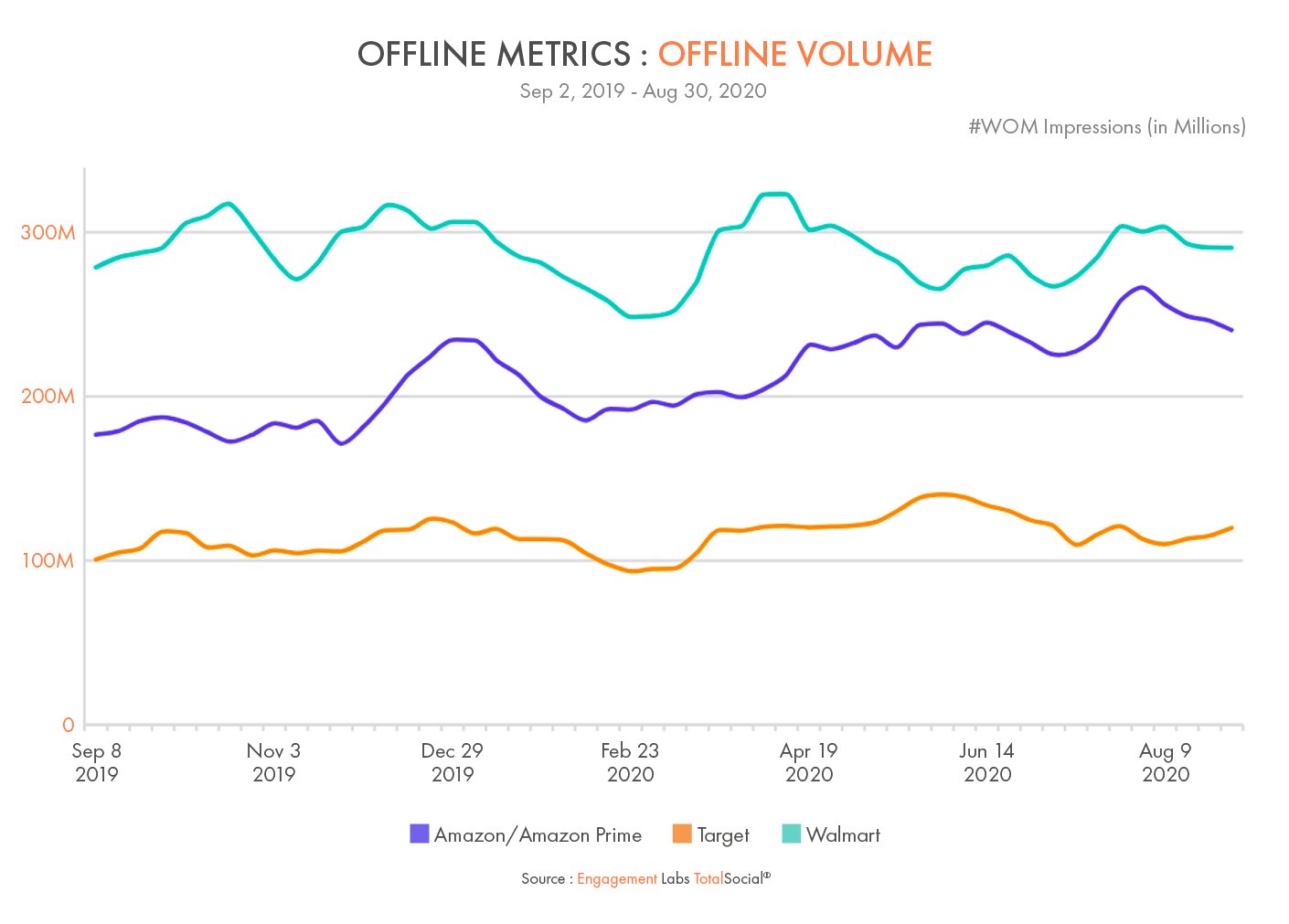 Walmart may still have an edge in offline conversation volume, but Amazon is way ahead in social media, with more than half a million weekly online mentions, roughly double Walmart’s. Yet these social media conversations haven’t risen to the extent that we see offline discussions growing.

Besides the erosion of its lead in conversation volume, Walmart has another vulnerability. The net sentiment for Walmart consumer conversations has long been less positive for Walmart compared to either Amazon or Target, both of which are top tier among all retailers. Since the pandemic, that pattern has worsened for Walmart as conversation have shifted in a more negative direction, both offline and online. 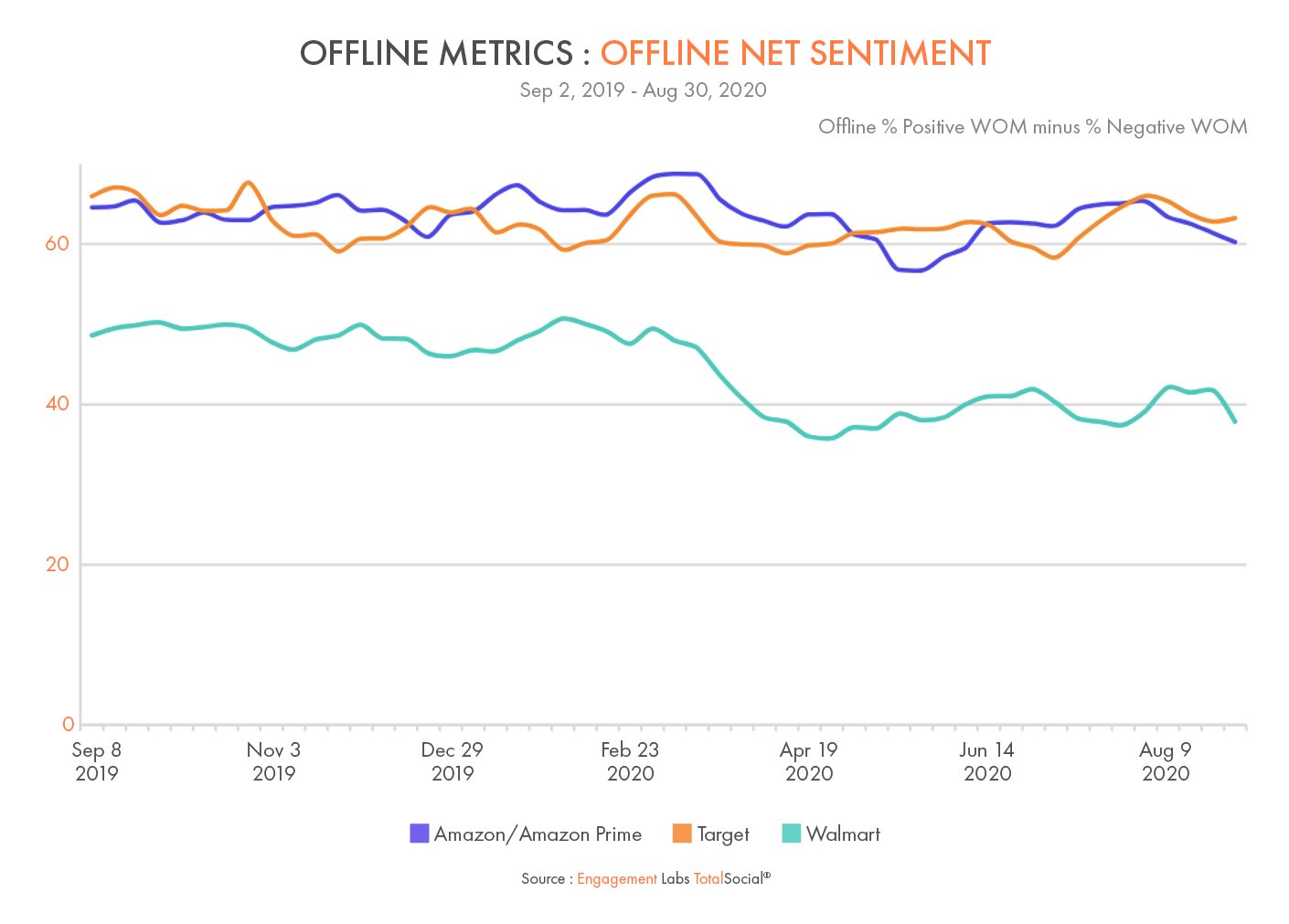 On an overall basis, retail category conversations are up slightly since the onset of the pandemic, but that shift belies enormous divergences in fortune, depending on the retail category and brand. Generally, discount general merchandisers, supermarket and drugstores, and ecommerce-focused brands are doing the best, while the department and specialty stores that have dominated indoor malls are way down.

Yet there are exceptions for fast-fashion companies that have focused on young, app-based shoppers, suggesting that innovation propels brands forward even in the specialty apparel category that is struggling generally. The success these youth-oriented and online-focused brands are having in driving offline conversations also makes the important point that offline conversations will remain relevant and powerful as business drivers for generations to come.