Are Americans Losing Their Interest in Football?

Sports marketers are well aware that the NFL suffered a large viewership decline during the 2016 season.

Are Americans losing their interest in football? Or was this strictly a ratings issue brought on by the election and the increasing ability to watch football on different platforms?

TotalSocial™ shows that the NFL’s problem is not limited to ratings: interest in the league as measured by word of mouth is down an alarming 26% since last season, and has largely been trending downwards in recent years. To put it in perspective, Americans talked about the NFL this season less than half as much as they did five years ago. 2016 had the lowest fan engagement since we began tracking NFL word of mouth in 2006. All of this raises the question: What is driving decreasing interest in the NFL? 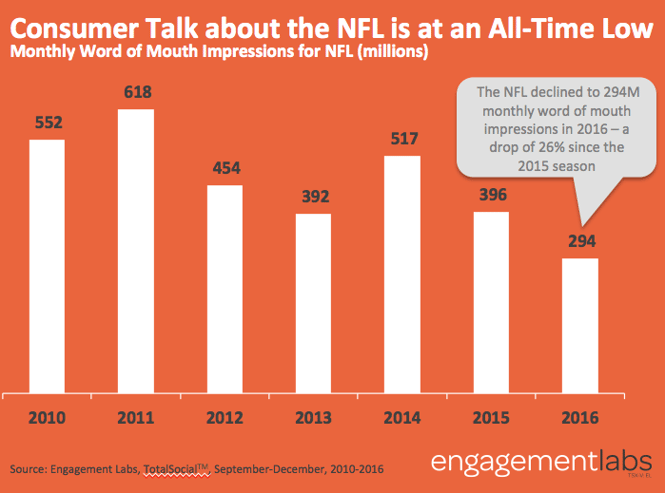 Talk about the NFL is down among Democrats and Independents. Independents had the biggest NFL word of mouth decline at 42%, a surprising figure given these are the voters who tend to be least engaged in elections. Democrat conversations about the NFL are down 11% since last year, well below the national average.

Some speculated that San Francisco 49ers quarterback Colin Kaepernick’s stand against the National Anthem turned off right-leaning fans. But the opposite is true: our data shows that NFL word of mouth among Republicans increased 2% since last season.

Drops in NFL consumer talk are not uncommon during an election year- we saw the same thing happen in 2012. But there is a bigger driver behind declining conversations about football: lack of interest among the league’s next generation of fans.

Word of mouth among teens was down 44%, the largest among all age groups. This group represents the future of NFL fans, and they appear to be rapidly losing interest in football.

Women actually saw a steeper decline than men, with 32% less talk than the prior season, indicating that football may be less of a shared experience in the household. Add it all up, and it’s clear that the NFL has a serious fan engagement issue.

To be fair, word of mouth across all major sports leagues declined in 2016. And the NFL is still king in terms of both consumer talk and ratings. But as the chart below shows, the NBA, MLB and NHL have not seen the magnitude of decline that has beset the NFL, making football’s crisis the most pressing.

How can the NFL get fans talking about it again?

We expect the Super Bowl will give the NFL its annual boost in word of mouth. The New England Patriots and Atlanta Falcons will square off Sunday in Houston. Super Bowl talk was up over the last two seasons, so the NFL should see a consumer conversational boost thanks to the event. Last year, the Peyton Manning-led Denver Broncos were the most talked about Super Bowl winner since the advent of TotalSocial.

But the NFL needs to think beyond this single event. While the Super Bowl might deliver both television ratings and word of mouth gold, the league needs to leverage the game as a springboard to reverse the alarming rate of declining interest among Americans.

For more information on TotalSocial™ or to request a demo, visit https://totalsocial.engagementlabs.com/

Want a better understanding of the online and offline conversations around your brand? Are you a journalist who wants to use real data to measure the brands you’re reporting on? Are you a company who wants to gain further insights into your brand's marketing strategies to develop effective campaigns to reach your audiences?

Request a demo today and learn more about TotalSocial by emailing sales@engagementlabs.com