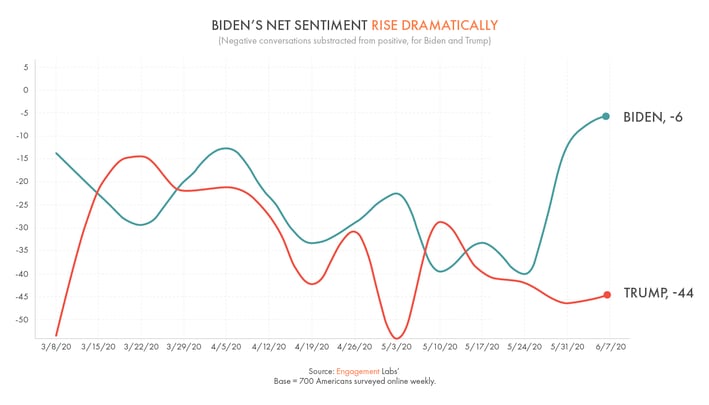 For the second straight week, presumptive nominee Joe Biden held a lead of more than 30 points over President Donald Trump in terms of the “net sentiment” of conversations about the two candidates, reflecting a change in political climate associated with the public outcry after the killing of George Floyd by police in Minneapolis.

Conversations about politicians generally are more negative than positive, the opposite of the pattern we see for consumer brands.  Yet net sentiment for Biden among all Americans is just barely negative now, at -6, compared to -44 for Donald Trump.  Differences of this kind around word of mouth sentiment have been shown to be predictive.  In the last days of the 2016 election a sharp trend in Donald Trump’s favor preceded his narrow victory over Hillary Clinton.

The shift in word of mouth sentiment for the presidential candidates is mirrored in the way Americans are talking about the two parties in Congress. Between early May and early June, the net sentiment of “Republicans in Congress” have worsened while improving for “Democrats in Congress.” Both sides are in negative territory, but conversations about Democrats in Congress are less negative (-22) than those about Republicans (-53), suggesting increasing risk for the reelection prospects of Republican Senators, in particular. 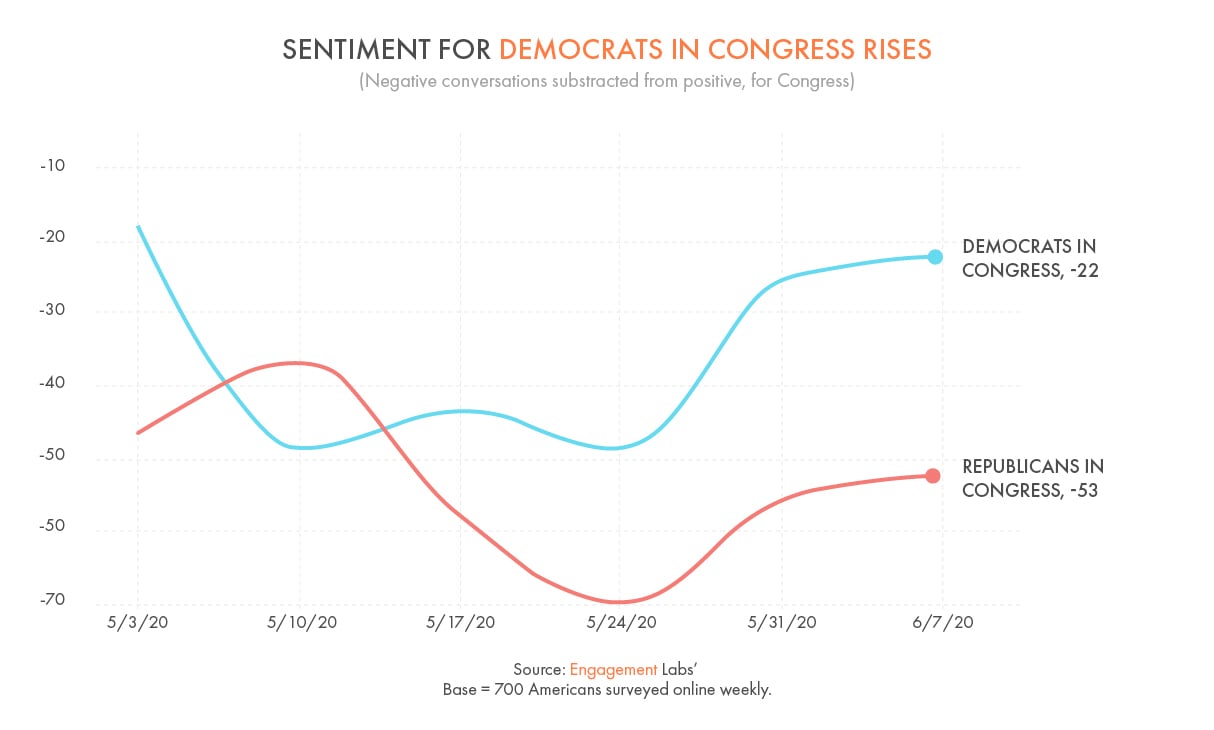 In the presidential match-up, the trends among partisans point to a weakening of Donald Trump’s position among his Republican base, as we reported last week in MediaPost. Some of Biden’s recent improvement comes from Republicans, whose conversations were positive about the former Vice President 19% of the time compared to just 3% two weeks ago, although most GOP conversations are negative about Biden (81%).

More troubling for the President, Republicans’ conversations about Trump are less positive now (+29) versus two weeks ago (+49) and far worse than in late March (+72). Even though polls suggest his base remains with him, deterioration in conversations have proved to be a leading indicator of things to come. 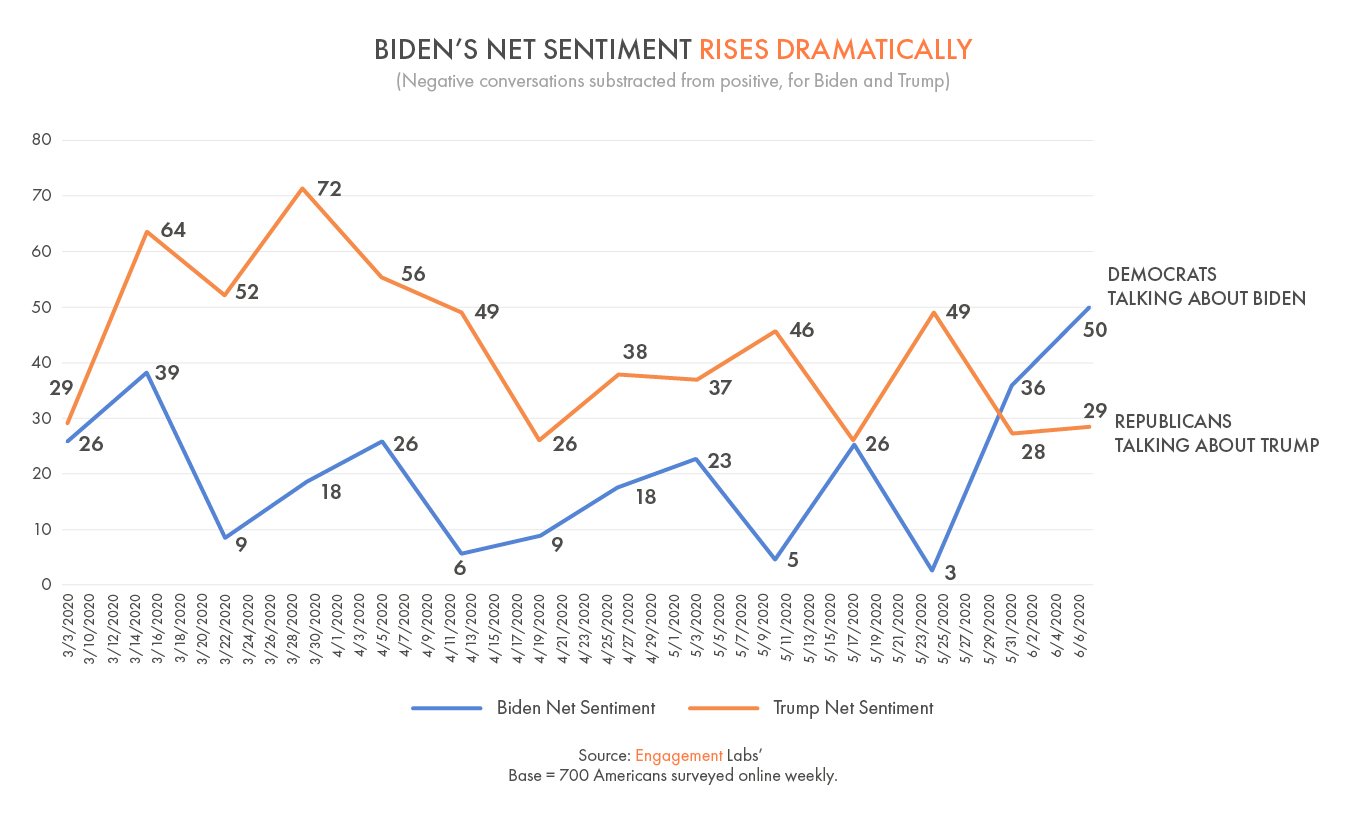 The main source of Biden’s improvement was among Democrats, whose net sentiment rose to +50 from only +3 two weeks ago, creating a 21-point advantage to Joe Biden over Trump when comparing the conversations of each candidate’s own partisans.  Indeed, the last two weeks are the only period when Biden held such an advantage over Trump since he became the last candidate running for the Democratic nomination.

While Biden’s conversations are much more positive than Trump’s, the president leads in terms of the total amount of conversation attention.  More than half of all Americans (54%) were talking about Trump the first week of June, compared to 30% who were talking about Biden, a fairly consistent gap over recent months, but also to be expected in light of Trump being the incumbent at a time of multiple national crises. Meanwhile, the former vice president is generally staying out of sight, “in his basement,” as many have remarked, and thus the subject of fewer conversations. 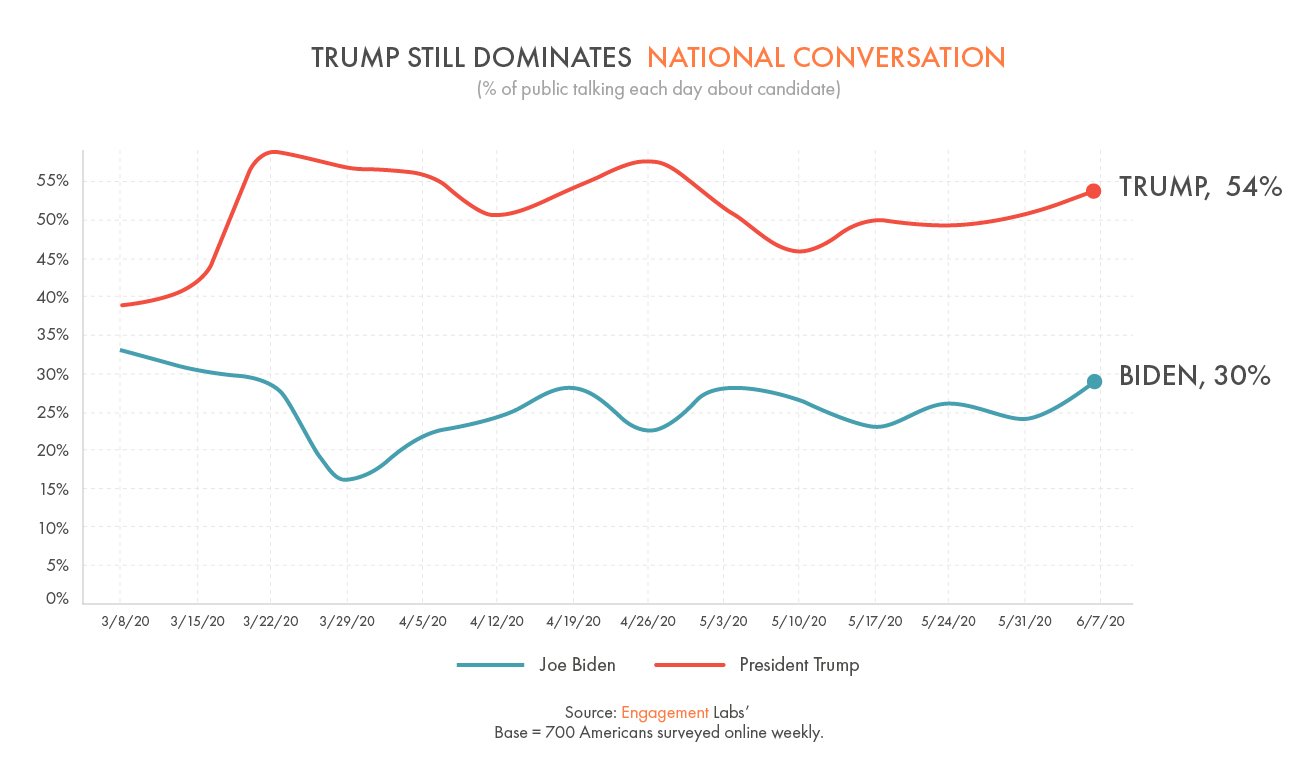 Yet if the latest net sentiment trends are a guide, as they often are, Biden’s basement strategy is producing positive conversations and positive results.