Democratic Party presidential nominee Joe Biden is being talked about slightly more positively than negatively for the first time during the campaign, according to the latest 3-week rolling average from Engagement Labs. Joe Biden has a “net sentiment” of +1, meaning slightly more kitchen-table conversations about the candidate are positive rather than negative, a big improvement from three weeks ago when he was at -18. By comparison, conversations about Donald Trump for the three weeks ending October 11 are at -26, similar to three weeks ago (-24).

This is the headline finding from the most current weekly tracking of word of mouth from Engagement Labs, using a methodology to measure everyday conversations that in 2016 helped prove the crucial role of the James Comey letter in swinging the election to Donald Trump in the campaign’s final days. 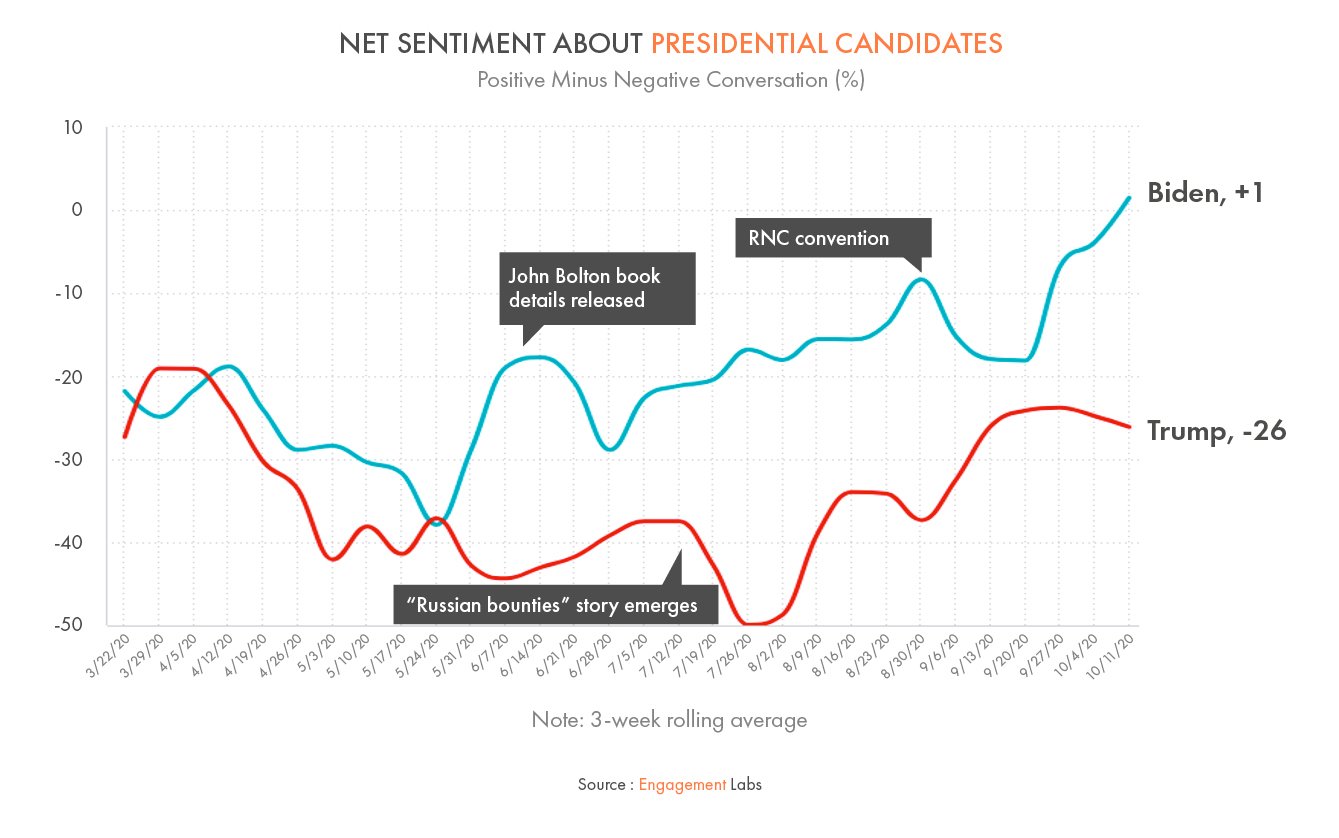 Even when in negative territory, the conversation about Joe Biden has been less negative than Trump’s every week of the campaign since Memorial Day when Biden emerged from seclusion due to COVID-19, wearing a mask. At that time, Trump was at -37 and Biden at -38.

Word of mouth trends in the 2020 presidential campaign are quite different than four years ago when conversations about both nominees, Donald Trump and Hillary Clinton, were consistently more negative than today. During the second week of October, Clinton was 38 points worse than Joe Biden now, and Trump in 2016 was 29 points worse than now.

Over the last three weeks, improvements for Biden have been driven by improvements among groups that were quite negative about him before: white voters (20 point better now), Hispanics (37 points better), and those who have a high school diploma or less education (29 points better). 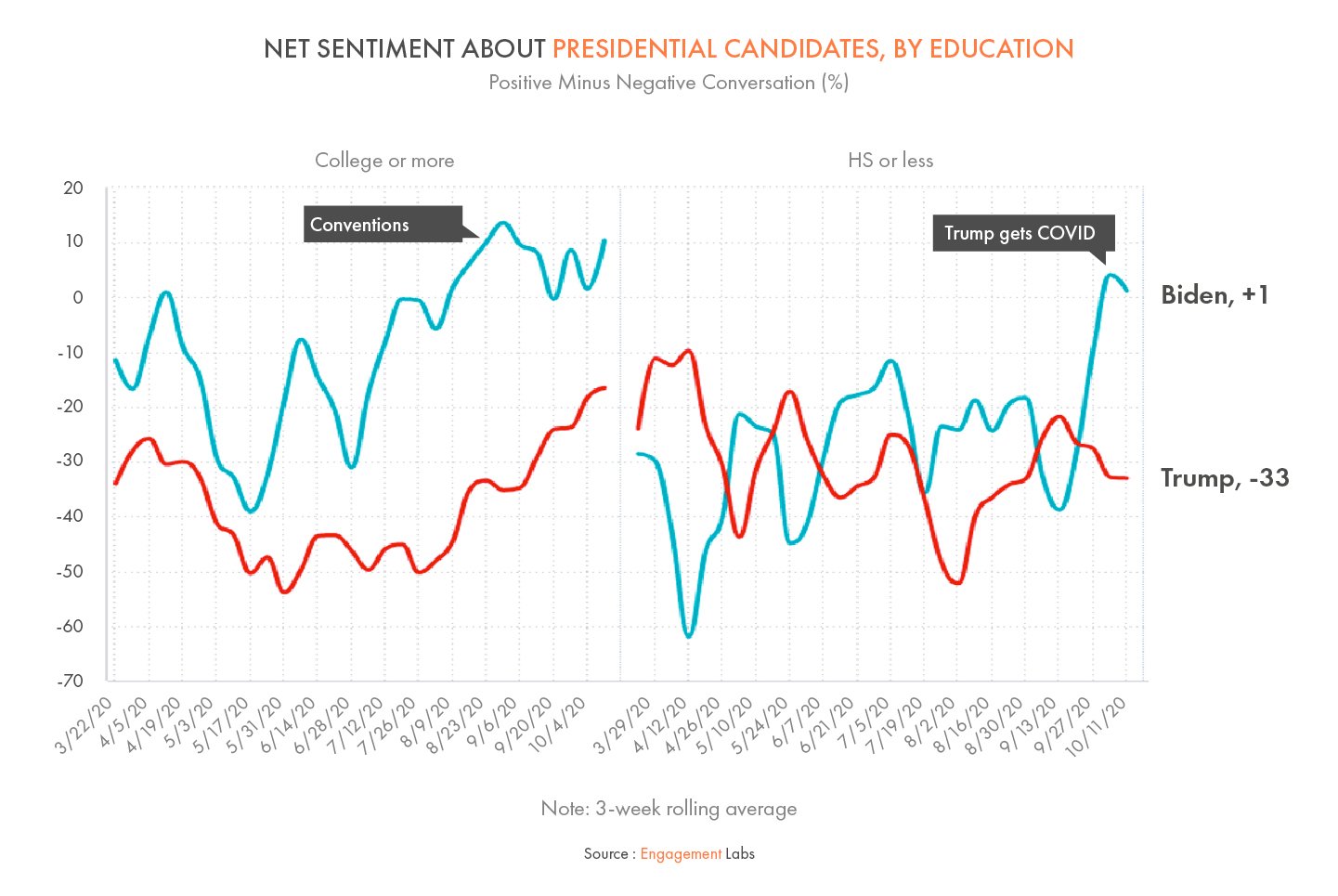 The conversation shifts among Hispanics and those with less education are particularly dramatic, coming in the first two weeks of October and corresponding to a series of major news events, including the first presidential debate, the nomination of Amy Coney Barrett to the Supreme Court, and the president’s COVID diagnosis. 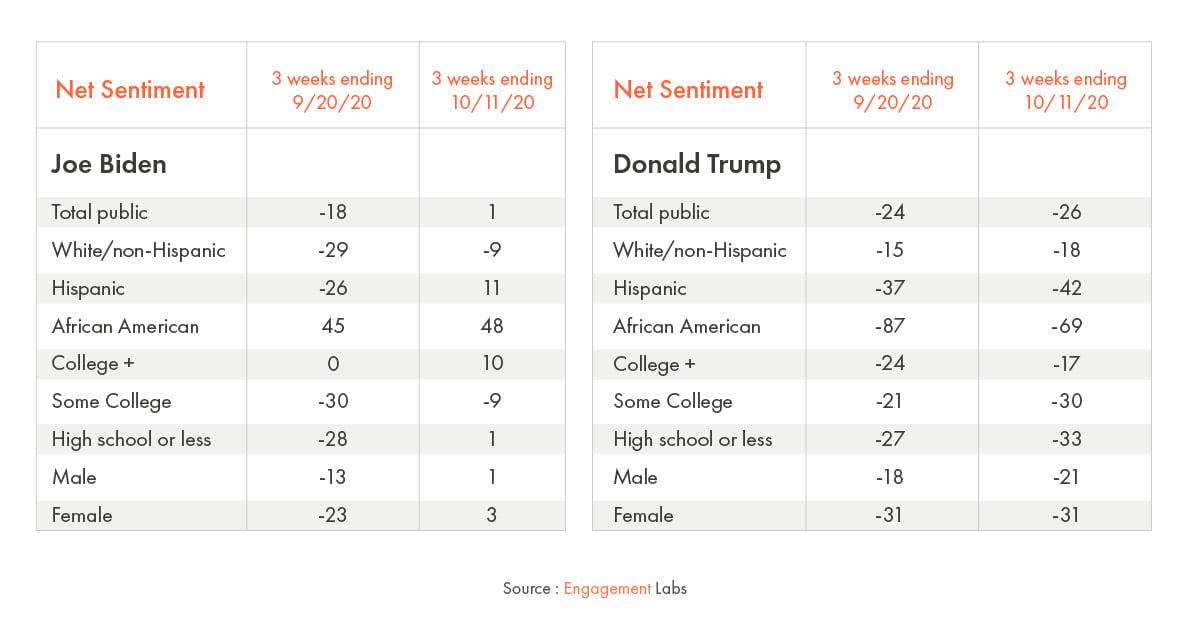 Another change in recent weeks is the rise in conversation frequency about Joe Biden. With the benefit of incumbency, Trump’s ability to drive news has 58% talking about him each day compared to 43% for Joe Biden, but the gap between the two has been much smaller since the two nominating conventions. 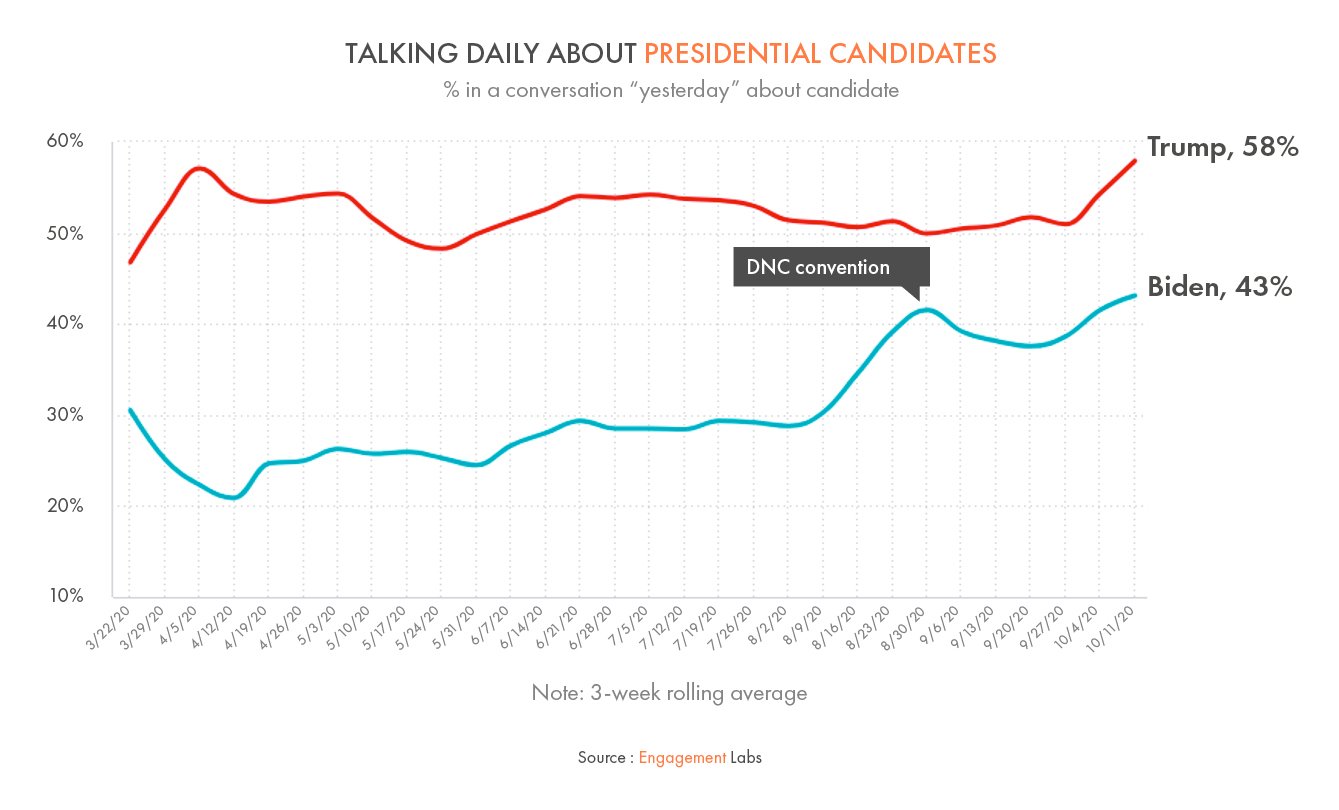 Conversation dynamics can be a leading indicator of both consumer and voter behavior because conversations tend to precede action whether at the cash register or the ballot box. Consumer research has shown that conversations are responsible for approximately 19% of consumer purchases. In 2016, a dramatic shift in the voter conversation helped signal that Clinton’s candidacy was in trouble following the release of the James Comey letter about Clinton’s emails 10 days before the election.

About Engagement Labs and the Study

Engagement Labs has a unique methodology that captures the word of mouth conversations of Americans – the true kitchen table things people talk about. Our data and method has found some notoriety after the 2016 campaign and was written up in the Clinton and Lanny Davis books as evidence of the impact of the Comey letter.