Where are you getting your news nowadays? The newspaper? Local news at 6 PM? What about social media? According to a recent study published by Pew Research Center, the number of Americans using Facebook and Twitter for news sources has risen significantly with 63% of users on each platform using the platform for news stories in 2015.

Social media provides news at the touch of a button. Users now not only have the ability to receive their news within seconds, but also share it with their networks. With the emergence of exclusively digital online news outlets over the past few years, newspapers have realized the importance of shifting their news over to social channels.

Engagement Labs recently investigated how the top U.S. print and digital publications were performing on social media and the results revealed some "newsworthy" insights.

Content is key to a newspaper’s success. Readers don’t waste their time with newspapers that report on stories they find irrelevant or mundane. But it’s hard for newspapers to really understand how their audiences are connecting with their published stories as there is a lack of direct interaction with readers.

Social media serves as the perfect medium for newspapers to gauge how well their content is performing as it provides a platform for readers to directly react to a news outlet's published content. These publications can evaluate what type of stories are resonating with audiences and which types of content they should be publishing more.

As we’ve preached time and time again here at Engagement Labs, engaging content is vital on social media. In our recent release we saw that newspapers, who are notoriously content-heavy, succeeded extremely well on social.

Based on our eValueTM data, we saw that numerous print publications saw overall eValue scores upwards of 80, out of a possible 100, consistently throughout the time period measured.

Breaking down this score further and examining these publications’ scores for Engagement - how fans are interacting with their content - we saw that newspapers were consistently scoring high for the subcategory throughout the time period measured. These scores are indicative of not only the fact that online audiences are turning to Facebook for news, but also the fact that they are resonating with the content these outlets are posting.

When comparing the scores of newspapers on Facebook to the scores of exclusively digital online news outlets on the same channel, we saw a much different story.

As highlighted by the above chart, the Engagement scores of these exclusively online outlets vary significantly and rank generally lower than traditional newspapers. Why is there such a drastic difference?

One primary reason is the difference in content. Exclusively digital online publications vary the type of content they post as they have a less traditional approach to the news. For instance, BuzzFeed, known for its original and creative content, not only posts news stories, but also posts their famous ‘listicles’, as well as video clips, memes, gifs and other relatable content. 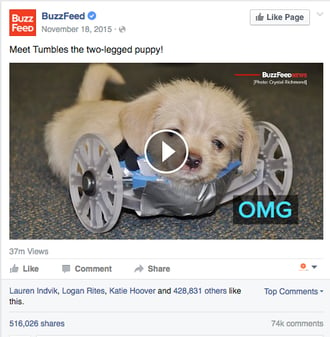 Other top-scoring online news outlet, Business Insider, takes a similar approach with their most engaged post on Facebook, in the time period measured, being that of a Russian adrenaline junkie performing daring tricks atop a 40-story building. With the rising popularity of Facebook video,  it’s no surprise to see these digital news outlets take advantage of this attention-capturing medium to report the news and draw in readers. 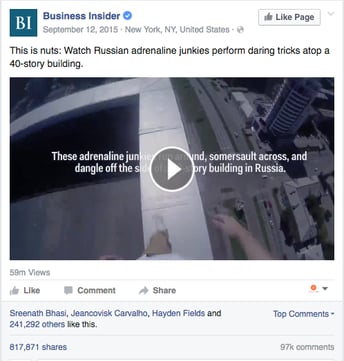 Based on the nature of fans of online news outlets, it makes sense that online outlets would vary the content to appeal to their digital-savvy audience. Whereas, newspaper fans are more adept to reading longer articles, Facebook is very supportive of this type of content with the trending news section, keeping news stories at the top of newsfeeds for longer and providing numerous sharing options.

For example, Detroit Free Press, which scored the highest Engagement score of all print publications on Facebook garnered the most engagement from their news stories regarding local events and Detroit-focused topics.

This role reversal can be explained by both the type of content posted by digital outlets, versus print publications, and the nature of the social channels.

As mentioned previously, digital outlets are more experimental with their content, something which is embraced by the ever-moving Twittersphere. As a real-time platform, audiences on the platform love seeing content such as short video clips, images, memes and listicles; lengthier articles can easily be lost as Twitter’s real-time nature moves much faster than Facebook.

Pioneer digital publication, Huffington Post, is a perfect example of a digital outlet leveraging Twitter’s fast-paced nature as indicated by the outlet’s most engaged tweets were a news article and a simple image related to big breaking news stories from the past year.

While print and digital news publications may be reporting on the same news stories, the differences in their approach to content and their varying audiences ultimately impact their success on social.

As social media is becoming more channelized with audiences turning to certain channels with specific purposes in mind, news outlets should keep this audience behaviour in mind moving forward, so that when it comes to breaking news, they can ensure the social media spotlight is on them.