Cited and published on December 16, 2022 in WARC "World Cup shows why we need to talk about brands being talked about"

With the FIFA Men’s World Cup finals coming up this Sunday, MediaPost recently reported that “through the quarterfinals round of the 2022 FIFA World Cup in Qatar, an estimated $213.6 million in national TV advertising was placed on the Fox TV networks and NBCUniversal's Telemundo channels” that resulted in a collective 8.4 billion impressions.

As we’ve seen and evidenced, leveraging advertising and marketing to drive talkability is important because conversations among consumers drive about 19 percent of purchases, including conversations that are triggered by paid advertising—we find that one-quarter of the impact of advertising on sales occurs by causing consumers to talk about the brand.

Engagement Labs data are shedding light on the importance of a special group of consumers: World Cup viewers. Around one-third of American consumers ages 13 to 69 reported watching any of the FIFA World Cup games through Sunday, December 4th. While over half of viewers report following the USA closely, around one-in-five Americans are closely following Argentina and Brazil, while just shy of 15% are behind England and Mexico.

As seen in our analysis prior to the World Cup, soccer fans are a lucrative group of consumers for brand marketers. So, it isn’t surprising that World Cup viewers:

During the past couple weeks, these more prolific viewers have been exposed to World Cup advertisers and sponsors. In turn, we are seeing 40% of World Cup viewers engaging in conversation about at least one advertiser – a big +36% lift from non-viewers. World Cup sponsors also get a boost with 26% of viewers talking about a sponsor which is 25% higher than non-viewers. 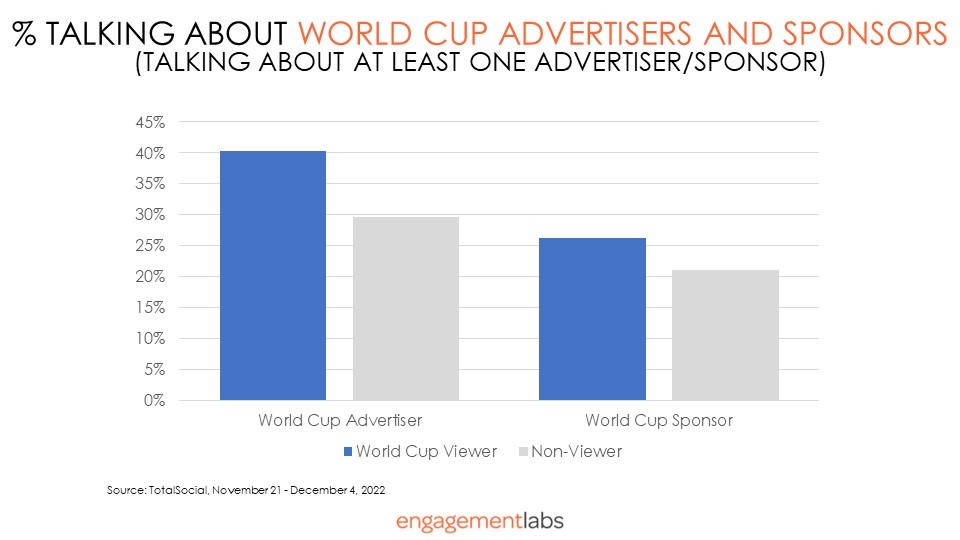 Which advertisers and sponsors are the biggest winners in terms of conversation? There are a number of ways Engagement Labs can explore this. For one, we ask World Cup viewers to tell us which brands they recall seeing advertised during the World Cup. During the past couple weeks, Coke, Qatar Airways, Nike, McDonald’s, and Adidas top the list. 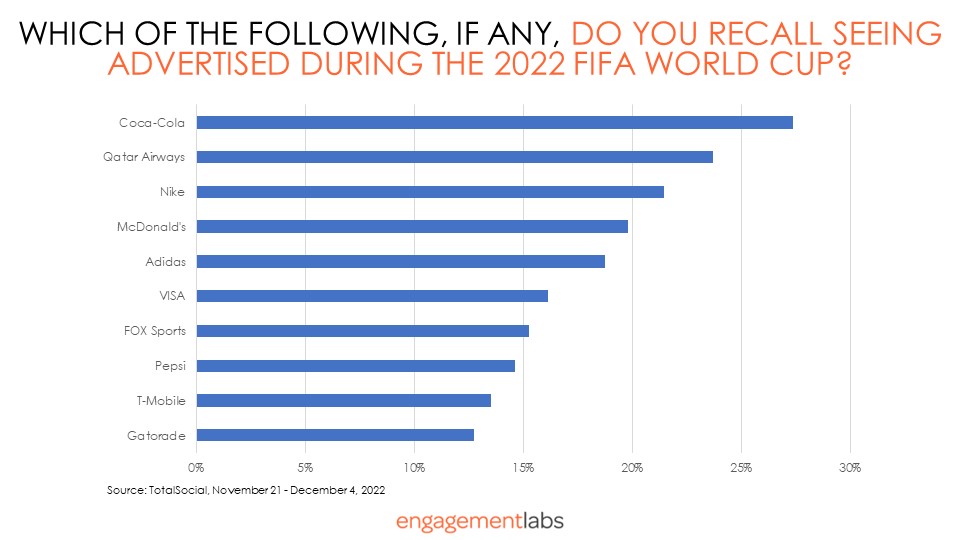 Another way to explore which brands are benefitting from the World Cup is to uncover which brands have the most conversation lift among viewers. During the first two weeks of the World Cup, New Balance, Crypto.com, Google Pixel, Gillette, Puma, Nike, Adidas and Doritos are seeing 50% or higher percentage difference between those watching as compared to the general public. Verizon, McDonald’s and Coke also have a strong increase, especially considering just how big these brands are in terms of conversation.

As the World Cup progresses during the next couple weeks, it will be interesting to see the shift in teams being followed and supported, as well as sponsors/advertisers discussed.

As a marketer looking to grow and maximize your 2023, Engagement Labs has the data and insights to help you drive advocacy that will amplify your messages and accelerate sales. With sports top of mind, understanding the impact of consumer conversations on brands and advertising, here are some meaningful data and insights on sports sponsorships, sports fans and viewers and leagues.

Each year, Engagement Labs studies the social media buzz and word of mouth lift associated with the Super Bowl. As we declared in Marketing Dive, that USA Today's Ad Meter — the most widely used indicator of advertising success in the big game — "doesn't work, and it is destined to fail again.” We based this on an extensive analysis of Super Bowl ad study published in the peer reviewed Journal of Advertising Research.

In 2023, we foresee Super Bowl ads that drive the most offline and online social engagement – engagement that leads to proven business outcomes – are not the ones highly rated on the popularity charts. And similarly, the most popular ads measured by USA Today are often not achieving the highly important goal of creating the buzz that drives consumer behavior.

For media and entertainment executives looking for insights and data sets to demonstrate the value of their audience and ads, Engagement Labs is able to analyze and provide data valuable for ad sales stories and influencer marketing across a range of advertiser categories.

In 2018, AdAge featured Turner Sports collaboration with Engagement Labs to measure the value of out-of-home audiences for advertisers during NBA on TNT’s coverage. Out-of-home viewership produces an extra “social” value to advertisers.

Some of our findings include:

If you wish to learn more about your brand’s advertising and sponsorship investments are having on your brand consumer conversations or explore more about sports fans or other audience segments, we invite you to reach out to us.