Senator and presidential candidate Elizabeth Warren is talking about breaking up the “big tech” companies like Google, Apple, Facebook, and Amazon, which we’ve previously written about as the “Four horsemen of the digital age.”  She may think about “big tech” as a monolith, but consumer conversations make very big distinctions among them.

ONLY FACEBOOK FAILS TO QUALIFY AS A “CONVERSATION COMMANDER”

Consequently, Facebook falls into the “Whisper Brand” category due to the very negative sentiment of both kinds of conversation, making the largest social media platform a more attractive target for aggressive oversight.

Though Amazon and Facebook perform very differently in consumer conversations, they have one thing in common.  Both brands suffered extreme declines in positive conversations in April 2018.  Facebook’s online conversations became much more negative and less positive as it was revealed that the company allowed the marketing agency Cambridge Analytica access to private data on some 50 million Facebook users, as part of the 2016 Presidential Election.  Soon after, President Trump drove down net sentiment for Amazon by criticizing on the company over its ownership of the Washington Post and the deal it struck with the US Postal Service for delivering Amazon packages.

FACEBOOK CONSISTENTLY HAS THE LEAST POSITIVE CONVERSATIONS IN SOCIAL MEDIA 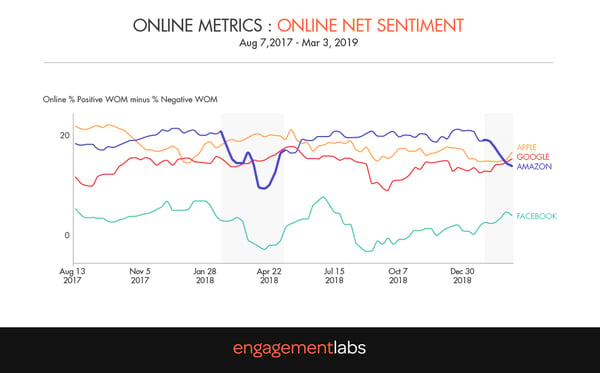 For Amazon, the negative downturn was short-lived and confined to social media.  For Facebook, however, both online and offline conversations suffered, and both streams of conversations have remained quite negative since.

ONLY FACEBOOK HAS SUFFERED A DOWNTURN IN OFFLINE CONVERSATION SENTIMENT 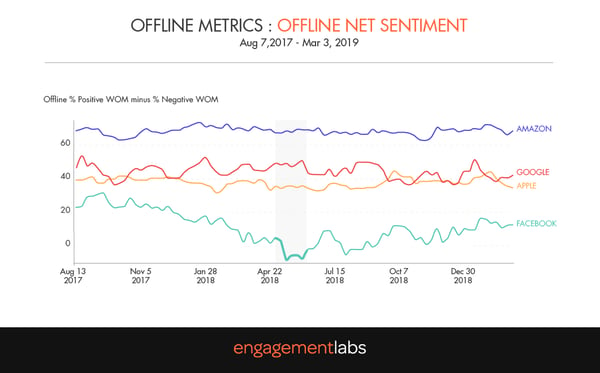 The pattern recently repeated itself for Amazon, as social media conversations have soured since founder Jeff Bezos revealed he was in a battle with the publisher of the National Enquirer over salacious photos related to an affair and resulting divorce. Offline conversations have stayed highly positive, a common pattern we’ve seen in our politically charged era.

Why has Facebook consistently under-performed in conversations against its big tech rivals?  One factor is simply being the biggest social media platform, and thus a lightning rod to criticism. But Google is the biggest in Search, and Amazon is the biggest in eCommerce.  Consumers are not automatically against “bigness,” which is something for political candidates to bear in mind.

Besides its market dominance, Facebook has been repeatedly in the news for failures to protect data, for a lack of candor over its impact on the 2016 election, and, most recently, for allegedly criminal behavior in its sharing of private user data with big business partners.  Thus, Facebook is really in a different category than other “big tech,” companies, and consumer conversations reflect that fact.

If Senator Warren gets her way and a big-tech break-up materializes, Amazon, Google, and Apple will have reason to blame Facebook as the black sheep of the four horsemen of the digital economy.