The Gillette brand caused a social media backlash in mid-January when it released a commercial against “toxic masculinity,” in a new twist on its “The Best a Man Can Get” campaign. The 90-second commercial raised timely question about the “boys will be boys” culture in a #metoo era.

The campaign also drove outrage on social media, with a nearly 4000% increase in online mentions of the Gillette brand, including an increase in the percentage of conversations that were negative about the brand.  Many posts accused Gillette of stereotyping, exaggerating the problem, and getting too political.  Some promised to switch to competitive shaving brands.

Debate about the success of the commercial has circulated in the trade press, with the most hopeful analysis pointing out that Gillette succeeded in connecting online with women and younger consumers, even if older men didn’t like it.

More important, we think, the real-world conversation about Gillette did not experience a similar strong, negative reaction.  Discussions in living rooms, at kitchen tables, and at water coolers increased in volume, and there was no change in the negativity of those discussions, according to our one-of-a-kind TotalSocial® platform that measures offline as well as online conversations about brands.

The lack of impact in real-world conversations is a double-edged razor for Gillette. On the one hand, it means the social media outrage—and risks—did not translate to the real world and are perhaps not reflective of the real world.  On the other hand, the campaign just didn’t register in a positive way either, at least in these early days.

Does that mean real-world conversations are immune to TV commercials?  Not at all. 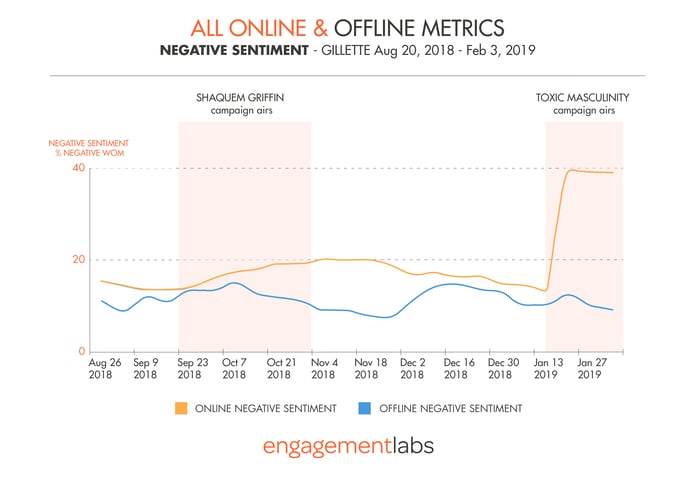 Gillette had the exact opposite result four months earlier when it released a compelling commercial featuring Seattle Seahawks linebacker Shaquem Griffin who was born with just one hand yet has enjoyed a storied football career alongside his twin brother Shaquill, also a Seahawk. The commercial shows a one-handed boy athlete learning to shave, while also training with his brother to run, tackle, and catch a football.  It culminates with an NFL contract for both brothers on the same team. It’s heartwarming.

The Shaquem commercial drove a big increase in offline conversations about the Gillette brand, and contributed to slow-but-steady improvement in the positive sentiment of those conversations.  What happened in social media? No measurable impact at all.

Why did the Shaquem commercial impact offline conversations but not online, the opposite of what happened with the Toxic Masculinity campaign?

The most important reason is online and offline discussions are often two entirely different conversations, unrelated to each other, as we have written in the Journal of Advertising Research and the MIT Sloan Management Review. Both conversations have an impact on brand sales, but they do so very differently, and they require different marketing strategies.  The optimal situation is to have both moving in a positive direction, in tandem.

Social media conversations tend to invite the extremes of opinion, particularly for politically charged discussions, as we have written in MediaPost. Those opinions do not necessarily reflect the broader population and they often are short lived as the people who join the conversation on social media to join the social, cultural or political discussion move onto other things.  Meantime, offline conversations tend to be used for emotional sharing, as stimulated by the compelling video of Shaquem Griffin.

The implication for marketers is to avoid over-relying on popular social media listening tools for verdicts on marketing campaigns and public relations crises. While these tools can enable important two-way dialogs between brands and consumers, they don’t necessarily reflect mainstream opinion.

Our advice is a more holistic measurement philosophy, one that keeps an eye on the volatile trends in social media and works to drive positive conversation online from brand fans; and at the same time it’s vital to pay special attention to the long-term brand-building power of offline conversations and recommendations.