How Does Politics Affect Your Brand and Sales? Should You Take a Stance? 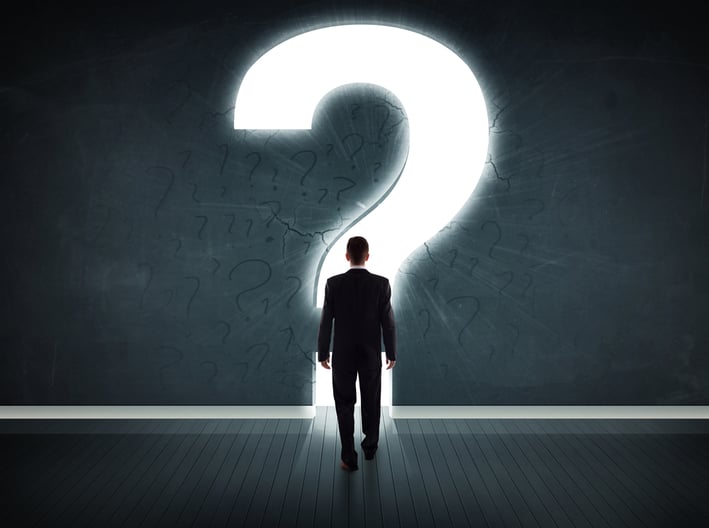 For many marketers, 2020 was the year when engagement in social issues became almost impossible to avoid, with issues related to race relations, a global pandemic, climate change, and the future of democracy taking center stage during a watershed election year. That’s not likely to change just because voting in the 2020 Presidential election is behind us. Record voter turnout and razor-thin margins are reflective of a much more politicized environment for the foreseeable future—offering opportunities for brands that get engaged skillfully, and hazards for those who don’t.

One case in point is the Hispanic food brand, Goya, which exploded into the national conversation after CEO Bob Unanue praised President Trump in a White House meeting. Online and offline conversation levels for the brand exploded and turned rather negative, especially on social media, yet the brand appears to have benefited. The private company revealed third-party sales data to the trade publication Food Dive to back-up its claim that sales are soaring, and the company is building a new $80 million plant in response to demand.

While progressive leaders and celebrities in the Latinx community launched boycotts of Goya, the brand likely benefited from the fact that the long-time niche brand was introduced to Donald Trump’s voter base just at the moment people are looking for new home cooking solutions and flavors during a pandemic that has reduced restaurant patronage.

The Goya experience mirrors—from the opposite side of the political divide—the Nike experience of two years earlier when the brand controversially embraced former NFL player Colin Kaepernick’s crusade against police brutality sparking an explosion of negative talk among conservative voters but driving up brand sales nonetheless. In 2018 Dick’s Sporting Goods invited negative conversation about its brand when it sharply restricted gun sales in its stores following the tragic school shooting in Parkland, FL, but that hasn’t stopped its stock price from doubling since then amid the rising demand for home exercise equipment. Gillette weighed in with ads about toxic masculinity. And this year a multitude of brands joined the conversation about voting, race relations, climate change, and a host of other topical issues.

The NBA is an example of a brand that may be suffering from the increasing political activism of its stars. LeBron James has led NBA players in advocating for black lives and in promoting voting. While this could be a factor in the 49% reduction in audiences this year, there are so many other unusual circumstances during the pandemic it is hard to know for sure. But there’s no question the conversation has changed—the NBA is showing up in social media conversations about racial justice, and the net sentiment of conversations has been volatile—particularly in social media. 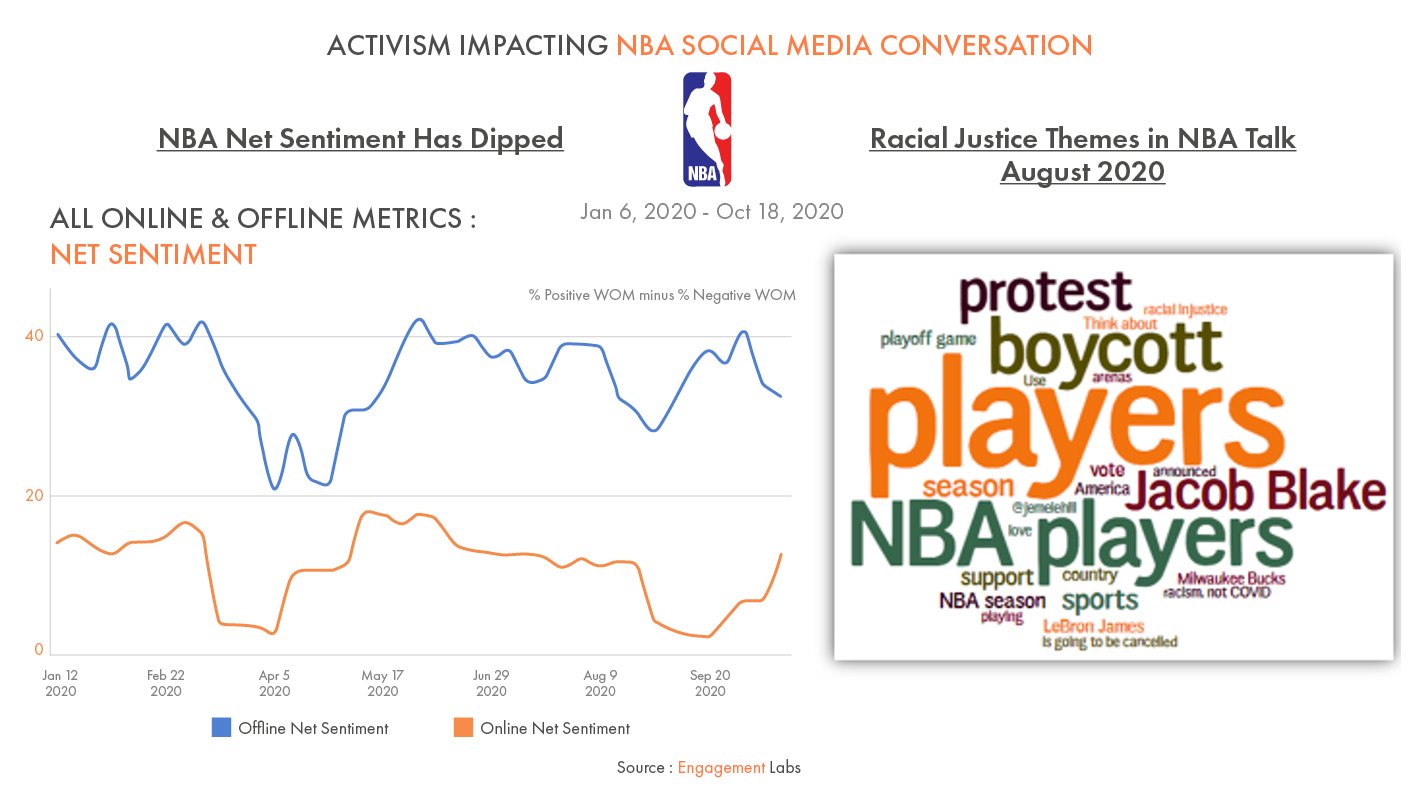 Having said that, racial justice is the #1 issue being discussed by NBA fans, more so than Covid-19 or the election or schools, and in that regard the league’s support of its players and their activism about racial justice fits well with their fan base. This is why it’s important to understand the fit between a brand’s audience and the issues agenda it supports.

How Best To Navigate the Nation’s Issues Agenda

For brand marketers, is it possible to anticipate consumer reaction to forays into politics and issues? While the 2016 political campaign showed the challenge of predicting politics, conversation trends can provide guidance. One powerful approach is to analyze the overlaps in political and brand constituencies. Indeed, many of the same people who engage in political advocacy are also engaging in brand advocacy. It is important to know which issues your brand’s most loyal supporters care about and are advocating about—and which ones turn them off. 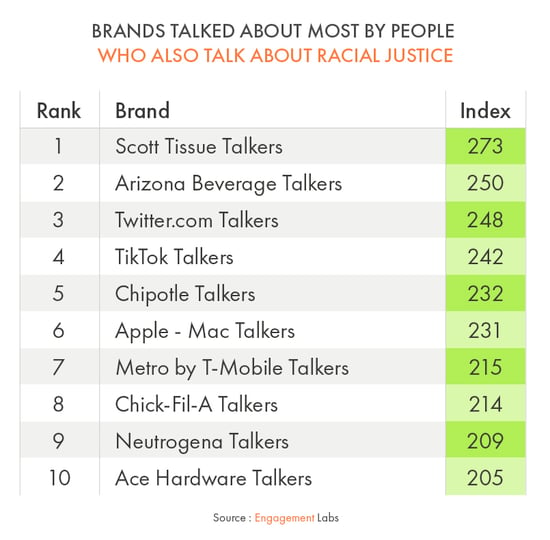 Another issue that has become increasingly political this year is the public policy response to the COVID-19 pandemic. This issue also correlates to the people talking about specific brands, among them the Walgreens and CVS drugstore brands and United HealthCare, companies that are playing important roles for COVID advice, sterilization products, and an annual flu vaccine. Other brands with a strong association with the COVID-19 conversation are Fox News, Neutrogena, Microsoft, and Hulu. 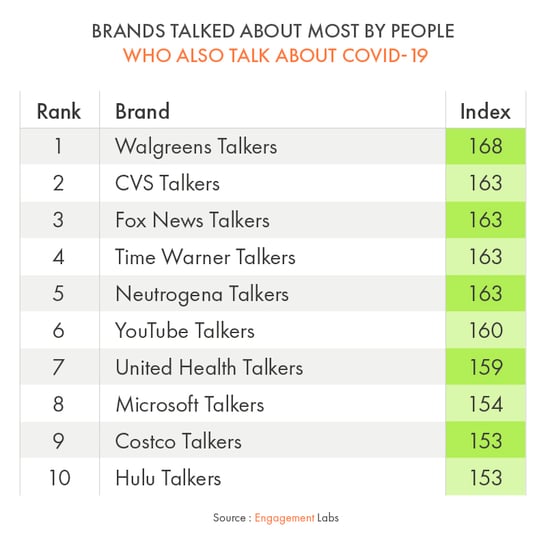 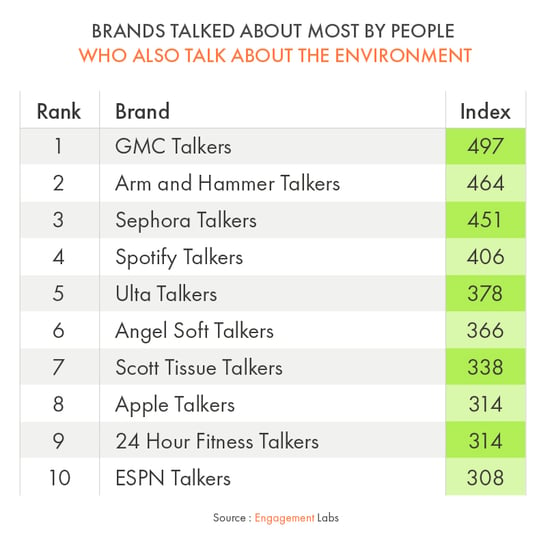 Indeed, people who talk about the environment stand out as the people most engaged with brands in 14 of the 15 consumer categories we measure in TotalSocial, most notably beauty (average index of 184), travel services (177), telecom (171), and technology (170). Only the category of financial services is not the most talked about by people talking as well about the environment—but in that case, the environment is the second most correlated issue, after economy-related issues.

The political tumult of the 2020 election has motivated many people to engage in political advocacy, including retired military leaders, celebrities, and normally neutral journalists. But politics are likely to become a larger factor in the consumer marketplace, as well, as we head in 2021. For brands venturing into these turbulent waters, it makes sense to listen to the conversation that’s already happening among their most loyal consumers and use this as a mapping tool to help guide your agenda.