In Political Conversations, Republicans Rally to GOP as Election Nears

President Trump and “Republicans in Congress” are the subjects of the least negative conversations they have experienced all year, based on Engagement Labs’ tracking of “kitchen table” conversations for the week ending October 28, 2018.  The conversation trends could be important in light of how the same methodology revealed the shift from Clinton to Trump in the last days of the 2016 election.

All of the nation’s political leaders are in deep in negative territory, with more negative conversations than positive.  But President Trump is now the least negative, at a -35 “net sentiment” score, his best result all year, while Democrats in Congress are at -40, a typical result for them.  Meantime, Republicans in Congress are just 7 points behind the Democrats, at -47, their best result in 2018.

The relatively good result for Republicans and the President reflect conversations during a week that saw high-ranking Democrats targeted with pipe bombs by a pro-Trump domestic terrorist. The impact of the fatal shooting of worshippers in a Pittsburg synagogue on Oct. 27 is not much factored in because it came during the last day of data collection.

Conversations about Trump & Republicans at Least Negative Levels in a Year 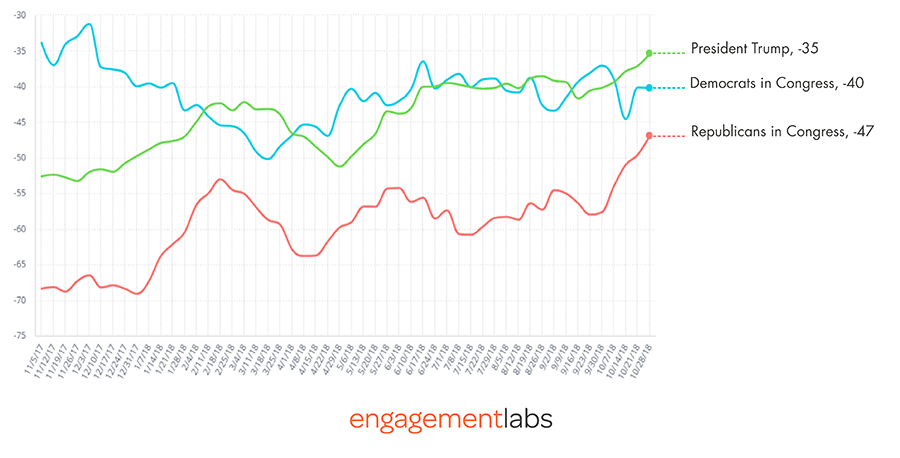 The improvements for Trump and the President come entirely from Republicans who are more positive and less negative about their own standard bearers than in the past. Republicans’ “net sentiment” among Republicans is +43, up 10 points from the first week of October.  Meantime, Republicans continue to see extremely low net sentiment scores of -53 and -84 among Independents and Democrats, respectively. The inverse is true with Republicans and Independents quite negative toward Democrats.

Net Sentiment Trend for “Republicans in Congress” by Party Identification 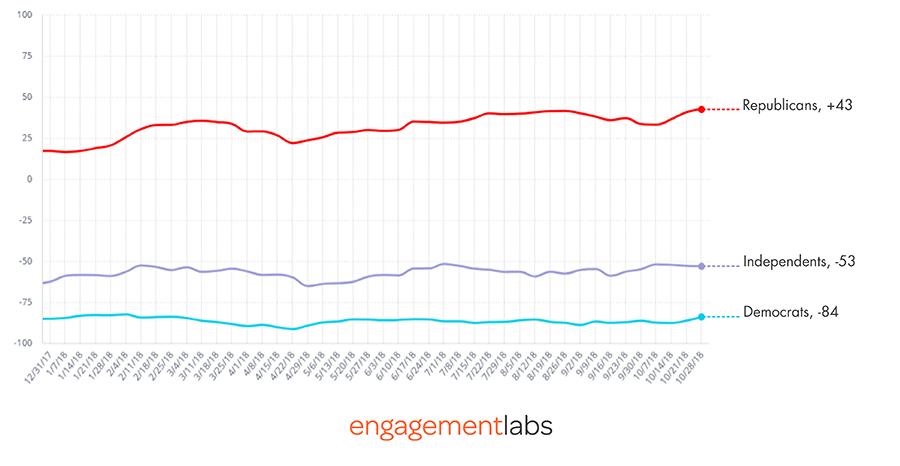 Confirming that the President has made the midterm election mostly about himself, fully 47% of Americans 18 to 69 years of age had a conversation about the president the day prior to taking the survey, the highest level in 10 months. Only about half as many were talking about the Democrats and Republicans in Congress who will be on ballots on November 6.

Nearly Half of Adults Talking Each Day about President Trump 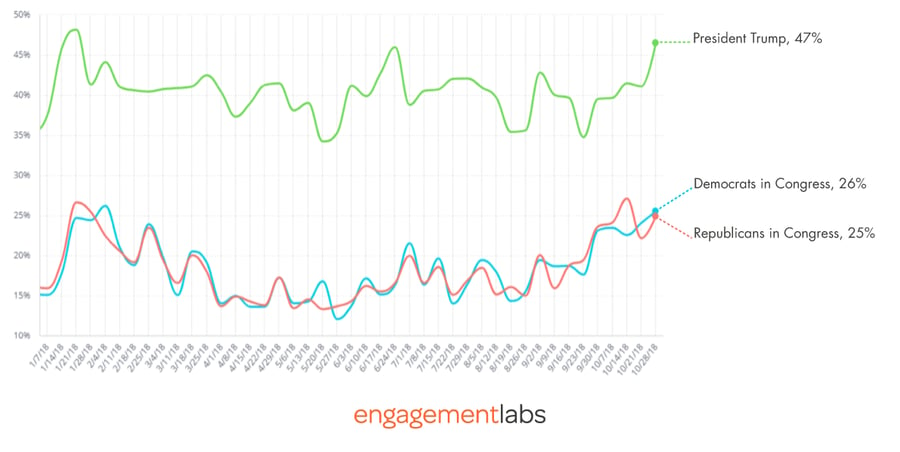 If conversation is a measure of electoral engagement, then young voters are at a very real risk of failing to turn up on Election Day.  Just 10% of 18- to 24-year-olds and 12% of 25- to 34-year-olds are talking each day about the national elections coming up, compared to two and three times as many voters 45 and older. 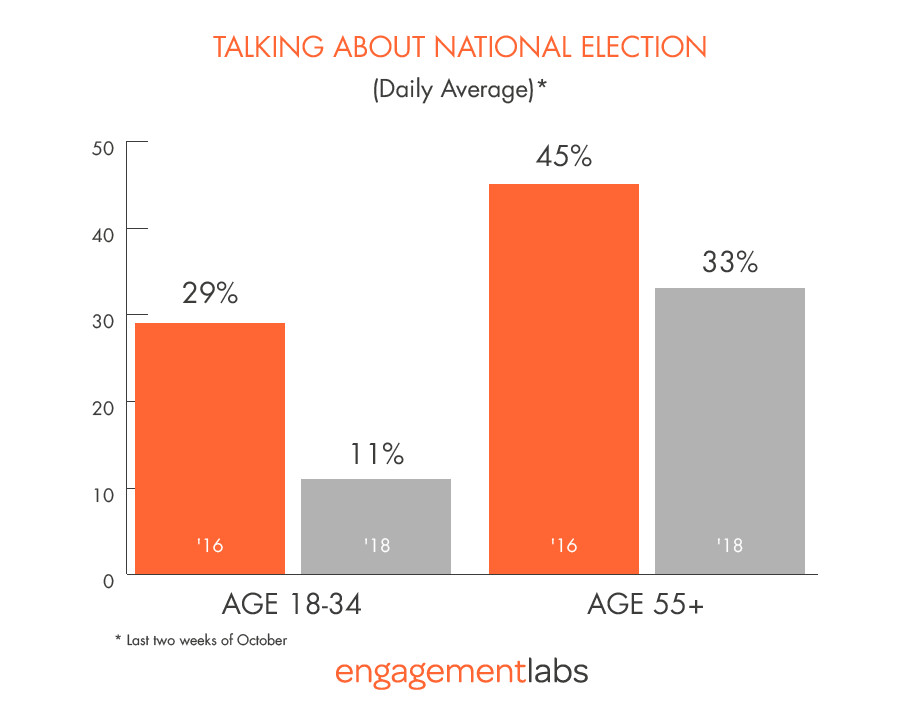 Younger voters in the second half of October are no more engaged in the elections than they were in September, and they are at less than half the engagement levels observed during the same weeks of October, ahead of the 2016 presidential election.

Older voters, meanwhile, are dramatically more engaged than in September, albeit still below the levels of 2016. Men and women’s engagement is tied at 21%, both up 8 points from September. But women are down more sharply than men from two years ago (18 points versus 10 points). 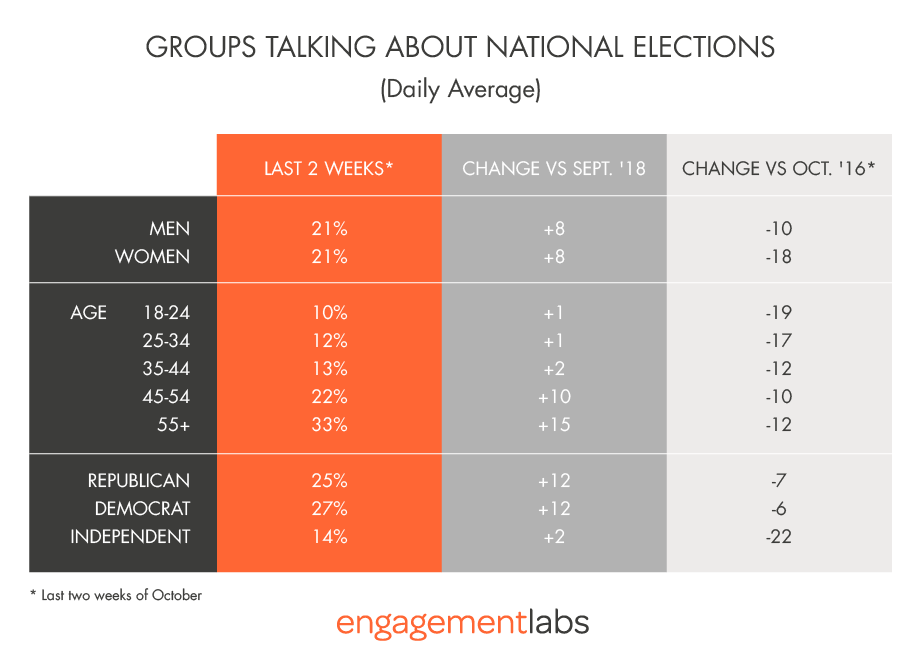 What does it Mean?

President Trump and the Republicans are doing a better job than the Democrats in engaging their base voters, about two weeks ahead of the election.  Despite a number of structural advantages that Democrats have—in particular, being the “out” party with an unpopular President—their success on Election Day increasingly depends on a last-minute turnout effort.

In 2016, the James Comey letter on October 28 caused a major shift in the national conversation toward Trump in the final week. It remains to be seen whether the Oct. 27 synagogue massacre—or some event still to happen—could shift the conversation toward the Democrats.

Importantly, midterm elections are not the same as Presidential ones. Fewer than one-quarter of the population live in a competitive House district, and so it is possible that highly localized campaign efforts could decisively turn the election toward the Democrats despite a national conversation that favors the Republicans now.  We will know soon.