Is Amazon Unbeatable? We Don’t Think So

Low prices. Convenience. Free shipping. Consumers put a high value on each, and – to the frustration of its retail competitors – Amazon delivers on all. But does this make the eCommerce giant truly unbeatable?

The truth is retailers have a huge advantage. They just need to make their punches land. Consider first what makes Amazon so successful.

“Your brand is what people say about you when you’re not in the room.”

A key reason for Amazon’s success is that it dominates consumer conversations. Consumers talk about the company more than any other retail brand – and by a significant margin, both online and offline. According to our TotalSocial® data & analytics platform , the brand’s social performance leads all other retail brands in America. Not only does Amazon get talked about a lot, but much of consumer conversation is very positive. It’s also a favorite of the most influential consumers.

This is important because consumer talk drives a significant portion of sales – 19 percent, on average, according to a 2017 landmark market-mix-modeling study. This represents between $7 and $10 trillion in sales each year. Face-to-face and other private forms of conversation drive more than half of this impact, while social media is responsible for slightly less.

The good news for retailers is that there are many opportunities to drive consumer conversations about their brand, even given Amazon’s strength. In fact, our data and analytics show that some retailers are leveraging consumer conversations in a way that enables them to compete effectively with Amazon in the battle for social influence. The rest of the retail community can learn from them.

For example, Kohl’s surpasses Amazon for offline sentiment during the critical holiday shopping season. Over the last several years, the retailer has invested in an aggressive omnichannel strategy. It launched a mobile app that personalized the in-store experience, introduced a single shopping bag accessible from any device, and began offering a “buy online, pick up in stores” option.

These activities created reasons for consumers to talk about the brand. As a result, the omnichannel strategy is working. Consumers are more motivated to share news about the brand and engage in discussion both online and off.

Meanwhile, Macy’s is Amazon’s main competitor when it comes to online sentiment. With a brand so closely associated with Thanksgiving and Christmas that it is top-of-mind for consumers over the holidays, it easily surpasses the e-Commerce giant during this critical shopping period. The retailer also has higher offline and online influence scores than Amazon. 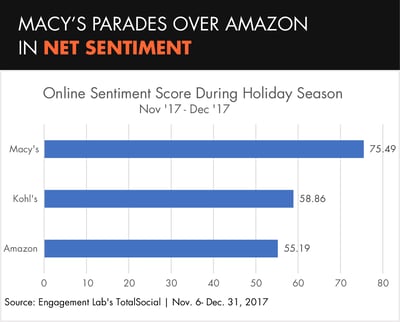 Like Kohl’s, Macy’s also sees omnichannel as the key to its future. It’s enhancing the in-store experience, training employees to be more customer focused, and creating a frictionless shopping experience through its web and mobile channels.

Kohl’s and Macy’s are just two of the retailers faring well in the ring against Amazon. To learn more about how these brands – and eight other retailers, including Costco, Nike and Lowe’s – are evoking new strategies to compete in today’s retail landscape, download our new eBook: 5 Ways to Beat Amazon.