“Sentiment Gap” Returns to More Typical Level, with Democrats at a 15-point Advantage

The second week of drama related to the nomination of Brett Kavanaugh to the Supreme Court saw the sentiment of kitchen-table conversations revert to a more typical advantage for the Democrats, with conversation about Democrats in Congress 15 points less negative than those toward Republicans in Congress, down from a gap of 27 points a week earlier.

While conversations about all political actors are well in the negative, President Trump’s conversation sentiment is tied with that of Democrats in Congress, at -39 versus the -54 for Republicans in Congress.

Engagement Labs’ survey methodology in tracking daily conversations is the same one the company used two years ago when it picked up a strong shift in sentiment toward Donald Trump and away from Hillary Clinton right after the James Comey letter was released in late October. The finding was cited by Clinton in her book, What Happened, as critical evidence for her contention that the Comey letter as the single biggest factor in her defeat.

The Supreme Court battle, which culminated in a 50-48 vote to confirm Kavanaugh by the Senate on Saturday, became a defining topic of political conversations in the week that ended October 7, the day after the vote.  Among all conversations about Republicans and Democrats in Congress, it became the second most important issue discussed, after the general theme of the “upcoming elections” now just weeks away.

Topics of All Kitchen-Table Conversations about Democrats & Republicans in Congress 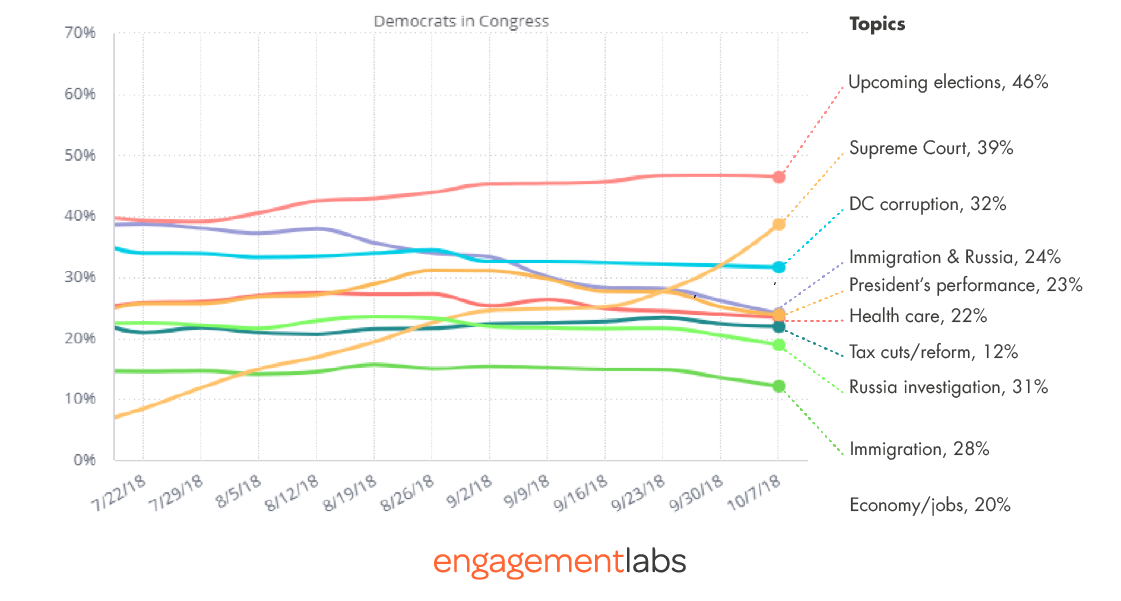 Among negative conversations, the Supreme Court battle was the third-most important regarding Republicans, after the upcoming elections and “corruption in Washington,” while for Democrats it was tied with corruption for second place.  The topic of corruption in Washington is clearly resonating with partisans on both sides, although it has not been getting as much attention as it might deserve in campaigns messaging for the Mid-terms.