More Than a Trigger: How Cheerios Used Bees to Increase Consumer Buzz

Brands have numerous strategies at their disposal to spark consumer conversations. Sometimes, it’s a new or sexy product. Other times, it’s a trigger - like breakfast – that keeps a brand top of mind and tip of tongue. Sometimes, however, it’s bees.

As Jonah Berger points out in his book, “Contagious,” people talk more about Cheerios than they talk about Disney World. That’s because Cheerios is closely associated with breakfast, which means it’s top of mind more often, thus increasing opportunities for word of mouth.

Given Cheerios’s substantial success at word of mouth, you might be surprised to learn that its parent, General Mills, rose 64 spots on our TotalSocial® 500 ranker. In addition, it had the eighth largest increase year-over-year, which earned it the distinction of “mover and shaker."

This achievement wasn’t the result of the breakfast trigger alone. The cereal maker’s quick rise had a lot to do with its campaign to ‘Bring Back the Bees.’

General Mills took a risk in creating a socially responsible and innovative marketing campaign for its flagship Cheerios brand with this campaign. While it did spur a little controversy, the campaign ultimately got consumers talking.

Initially launched in Canada last year, the promotion was extended to the US in March 2017. General Mills leveraged one of its iconic brand mascots, Buzz from Cheerios, to raise awareness of the declining bee population.

The company encouraged consumers to register online and receive free wildflower seeds, which they could plant to help create pollinator habitats in their own backyards. The campaign proved to be very successful at connecting to its consumers’ emotional interests. To date, the company has distributed more than 1.5 billion seeds in the US and Canada, far exceeding the company’s 2017 goal of 200 million.

“The first and biggest lesson learned is the true power of an integrated campaign. We had both earned and paid working together in harmony and it's a best practice we will employ going forward,” General Mills Canada Marketing Vice President Emma Eriksson told the Holmes Report, recently. “We also activated across several tough points to secure maximum exposure, from PR, to packaging, consumer promotions, out of home, TV, etcetera.”

One important observation about the top 10 with the most TotalSocial momentum is that they represent a mix of categories - from technology and entertainment to insurance companies, travel services and food brands. And, they include a mix of new products, such as the Apple Watch, along with well-established brands such as General Mills. 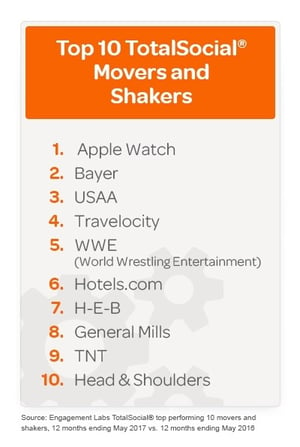 Thus, the big lesson from the “Bring Back the Bees” campaign and other brands on the “Movers and Shakers” list is that no matter the category or age of a brand, with a strong product, notable customer or talk-worthy marketing campaign, there is always an opportunity to gain momentum and improve how much and the way in which consumers talk about a brand.

Check out our e-book "Lessons From the Leaders of Social Influence, Brands that Crush Thier Category and have Consumers Talking" to read more case studies.