Cited and published on July 1, 2020 in MediaPost "Americans Talking About Racial Justice, COVID-19 Also Talk About Brands' Engagement With Issues" 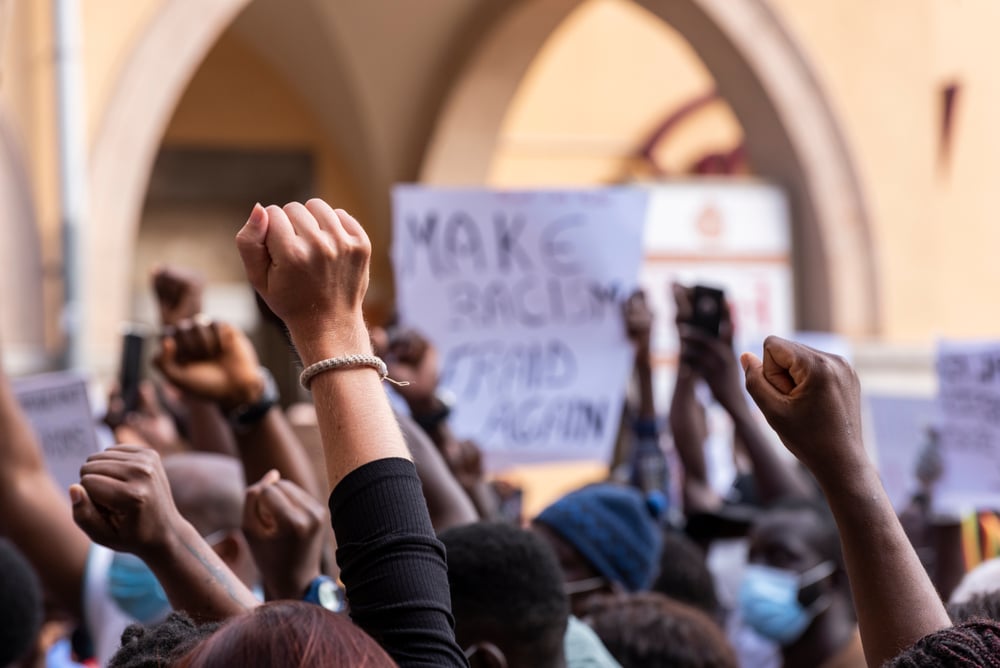 At a time of enormous societal change, many marketers are turning their attention towards responding to the Racial Justice and Black Lives Matter (BLM) movement. Many do so out of a recognition that they are long overdue in helping use their power and platform to bring social justice to America. Some assume that the Racial Justice issue has now overtaken COVID-19 in the national conversation. If they listen only to social media for their signal, there is reason why they might think that; but real-world conversation tells a different story. 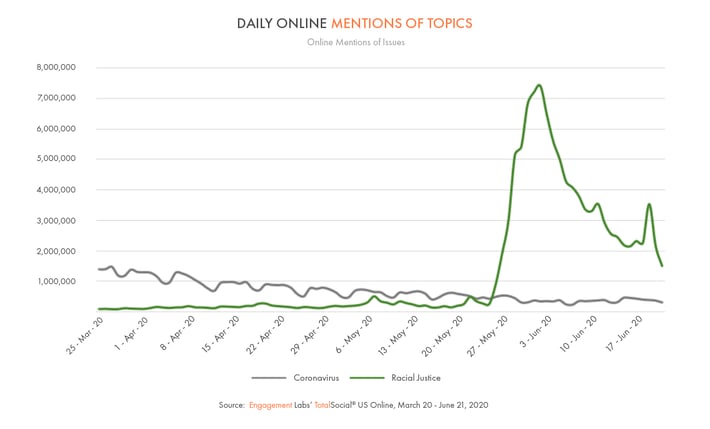 Does this same pattern hold in offline conversation? The answer is yes . . .and no. Racism or Racial Justice has emerged as a top discussion topic in offline conversations, with 46% of Americans talking about it daily. At the same time, there remains as many who also talk daily about Coronavirus/Major Health Issues (45%). 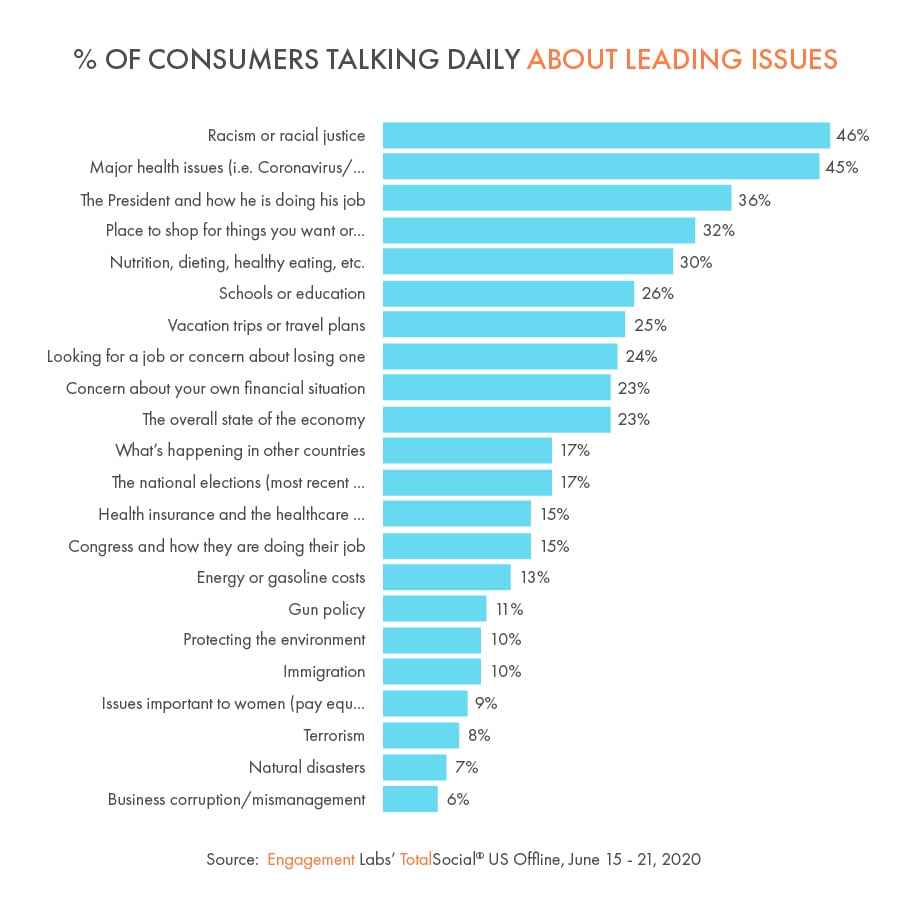 Delving further to look at people’s single most impactful conversation of the day, discussions related to Racial Justice/Unrest and COVID-19 also take equal footing. An equal number of Americans say each of the two issues are the most impactful topic they talked about that day. 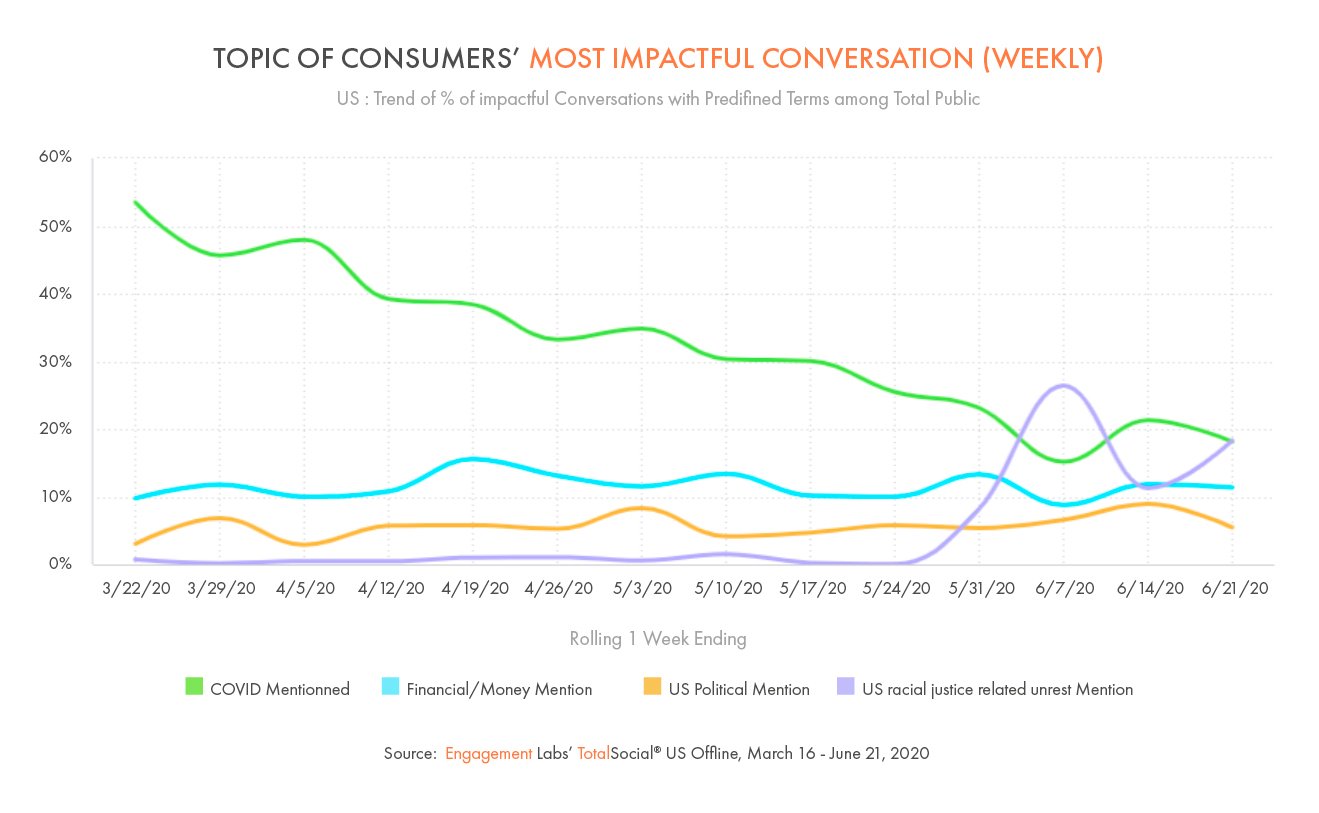 In short: offline conversation is “both/and,” not “either/or” when it comes to racism/racial justice and COVID-19, while social media (for now) is heavily focused on Racial Justice and BLM.

The issue of Racism and Racial Justice is garnering talk among pretty much everyone as very few segments are below average. In particular, teenagers and African-Americans are talking the most about this topic. Racial Justice talkers are also one-third more likely to be word of mouth influencers. They are what we at Engagement Labs call “Conversation Catalysts®” and are sought out for their advice and recommendations and lead others through offline as well as online conversation.

When we look at the demographic profile of people for whom Racial Justice is the most impactful conversation of the past day, parents -- who are likely engaging in conversations with their children about the continuing protests and news coverage -- and Democrats stand out, along with Westerners. 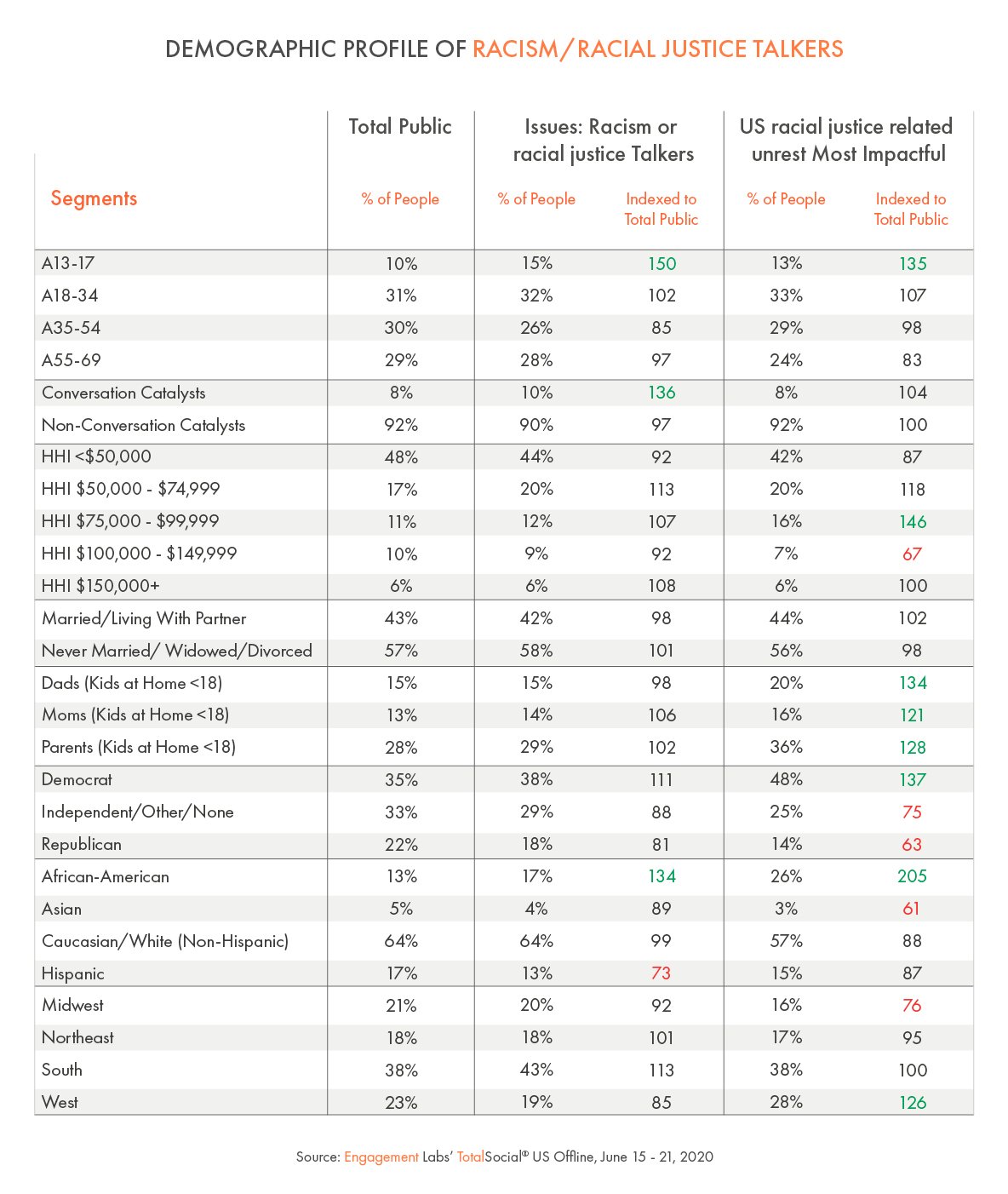 In comparison, discussions about COVID-19 are most impactful among older and middle-income consumers, and Democrats too. COVID-19 is also having a big impact on people residing in the South, as  the growing number of Coronavirus cases in that region is driving more conversation. Talk about COVID-19 is lowest in the Northeast and West. 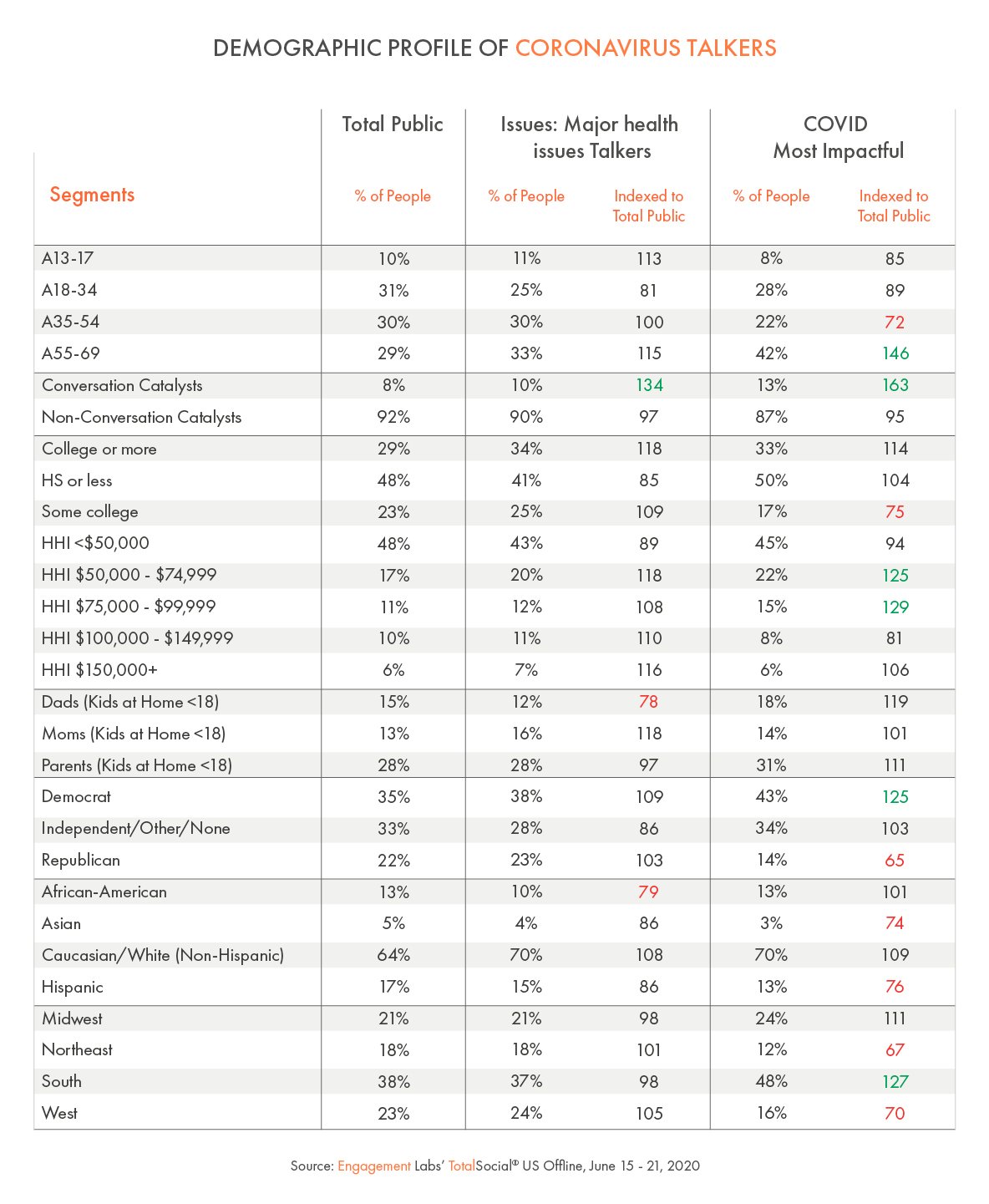 Knowing how many brands have become engaged with both COVID-19 and now Racial Justice, it is important to note that people who are talking about these issues are also more likely than average to be talking about brands. More specifically, people who discussed either Racial Justice or Major Health Issues have 21 more brand-related conversations a week than the average American. And, they’re talking more about most categories than the total public as well. 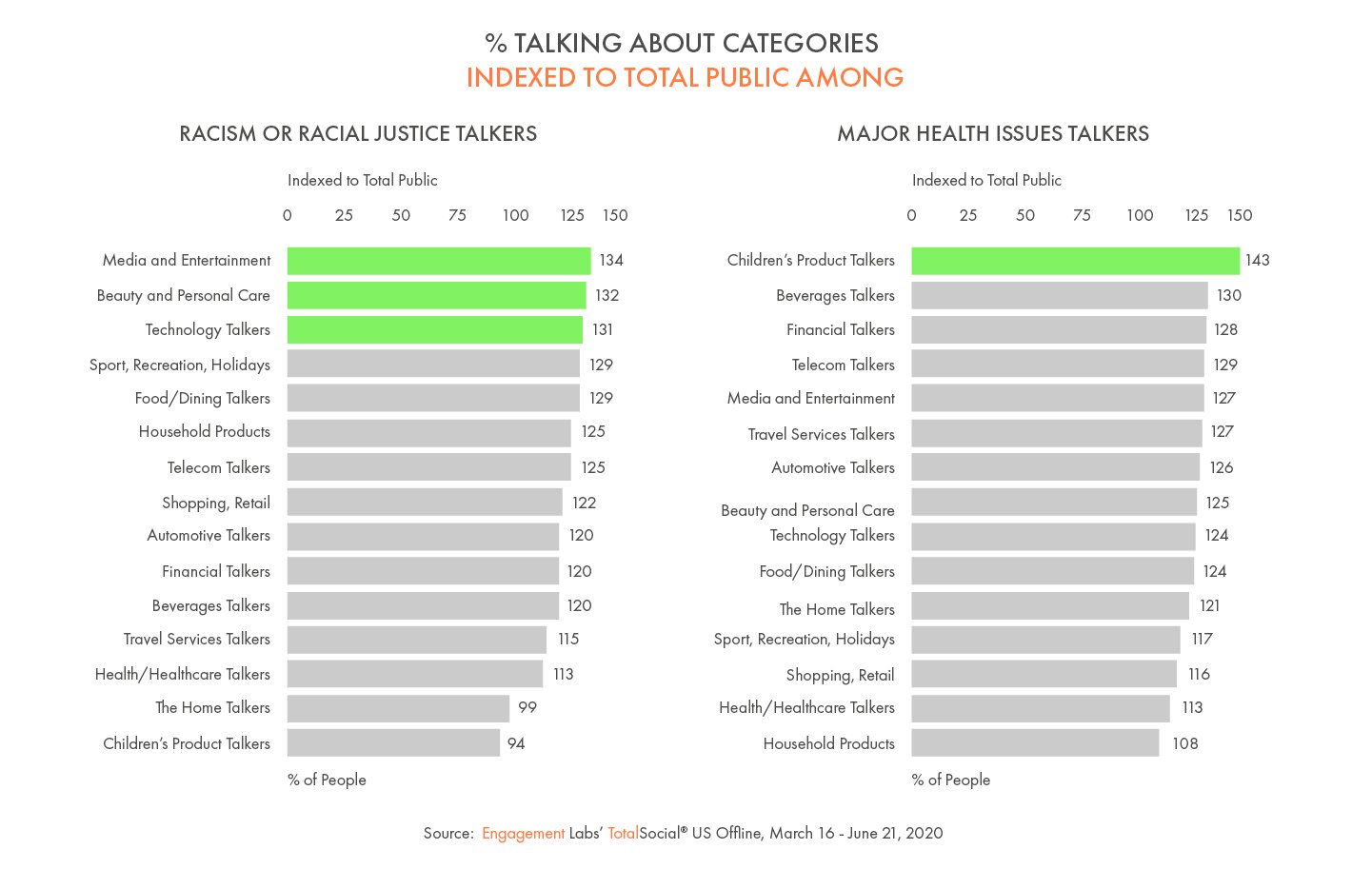 Nike was an early and prominent brand taking a stand on BLM. Their historic support for issues of racial justice has served them well and their current ads and commitment to BLM is driving positive conversation. In fact, their offline volume remains at historic highs, rather than peaking and then declining as can sometimes happen in circumstances like this. Meanwhile, Nike’s sentiment remains strong -- even stronger than a year ago. 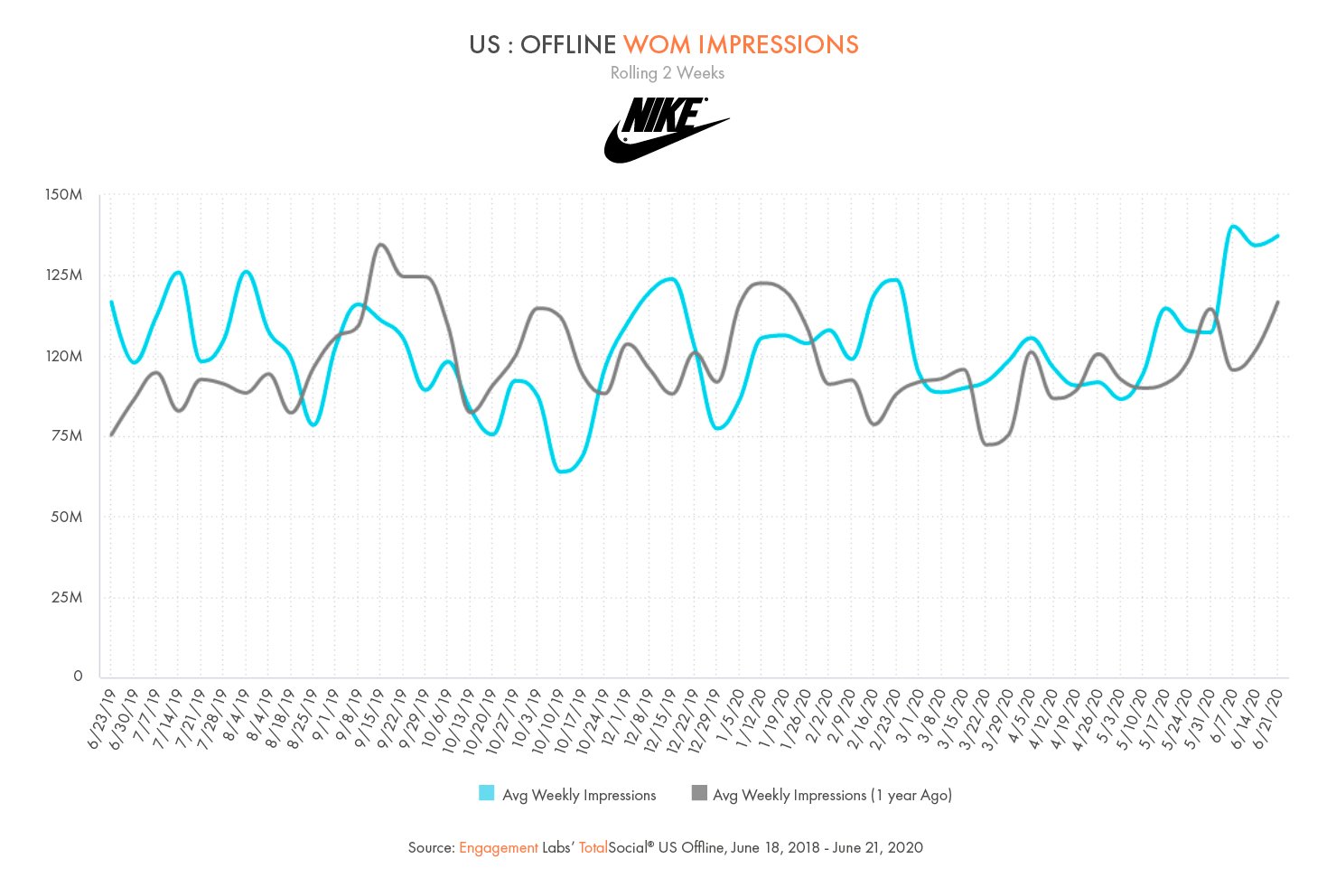 Marketers should keep this all in mind as they respond to the rapidly changing nature of consumer behaviors and conversations. While social media may send one signal, what people talk about and what impacts them the most is often much more complex and a major reason why offline and online are often uncorrelated to each other. We applaud brands for taking a stand in support of BLM; our data suggest that they remain vigilant as well to the role that COVID-19 continues to play in households today and be an active part of that consumer conversation as well. This past weekend’s Global Citizen “Global Goal:  Unite for Our Future – the Concert” which is sponsored by Citi, Procter & Gamble, SAP, Verizon and Vodafone, struck that dual chord and might serve as a model for brands to do the same.