How are consumers reacting? In the wake of the 2018 school shooting in Parkland, FL, Engagement Labs’ TotalSocial platform found that online and offline conversations trended very differently for brands such as Dick’s Sporting Goods, Citibank, Delta, MetLife, and Publix. Generally, social media conversations about brands taking stands to curb gun violence have turned negative, while real-world conversations remained positive. This reinforces a more generalized finding we have found, namely, that there is little correlation between the online and offline conversation.

That pattern is holding up again following the horrific mass shooting that killed 22 and injured 24 people in an El Paso Walmart on August 3.  Walmart and other retailers have begun announcing policies to discourage customers from openly carrying guns in their stores, even in states that permit “open carry.” Walmart also announced in September a series of additional policies to curtail the presence of guns in its stores, including an end to the sale of assault rifles and pistols, although hunting rifles will continue to be sold at Walmart.

The response in social media has been quite negative for Walmart—first, as a result of the horror of the shooting itself, and then due to opposition to policies that limit gun sales and open carry in Walmart stores.  Indeed, the net sentiment of social media conversations about Walmart were the most negative we have measured for Walmart in four years, with negative opinions outweighing positive ones for six consecutive weeks ending September 8. 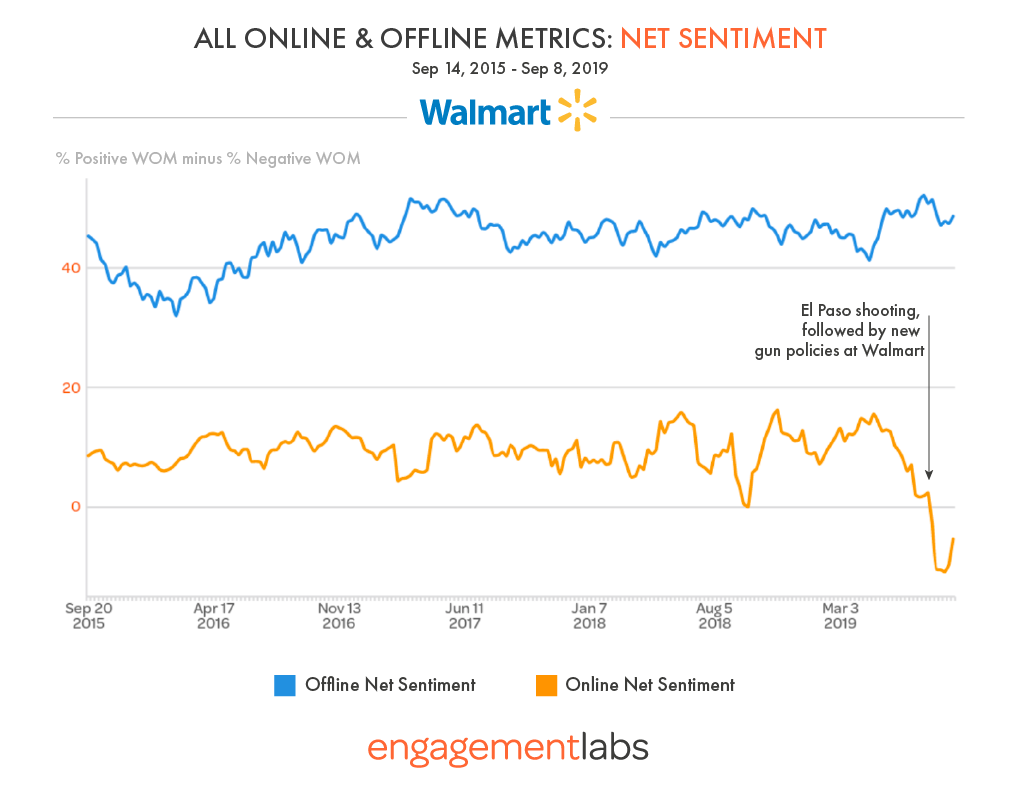 One reason online and offline conversations differ so much is that social media conversations tend to draw the most extreme opinions, and often do not reflect the broader conversation measured offline.  That’s why we recommend a holistic measurement approach that is available in TotalSocial.

Three other retailers that recently made announcements to discourage openly carrying guns on their premises—CVS, Kroger, and Walgreens—have not suffered downturns in conversation sentiment, either online or offline.

WALMART’S SOCIAL MEDIA DISCUSSION HURT THE MOST BY GUN ISSUE 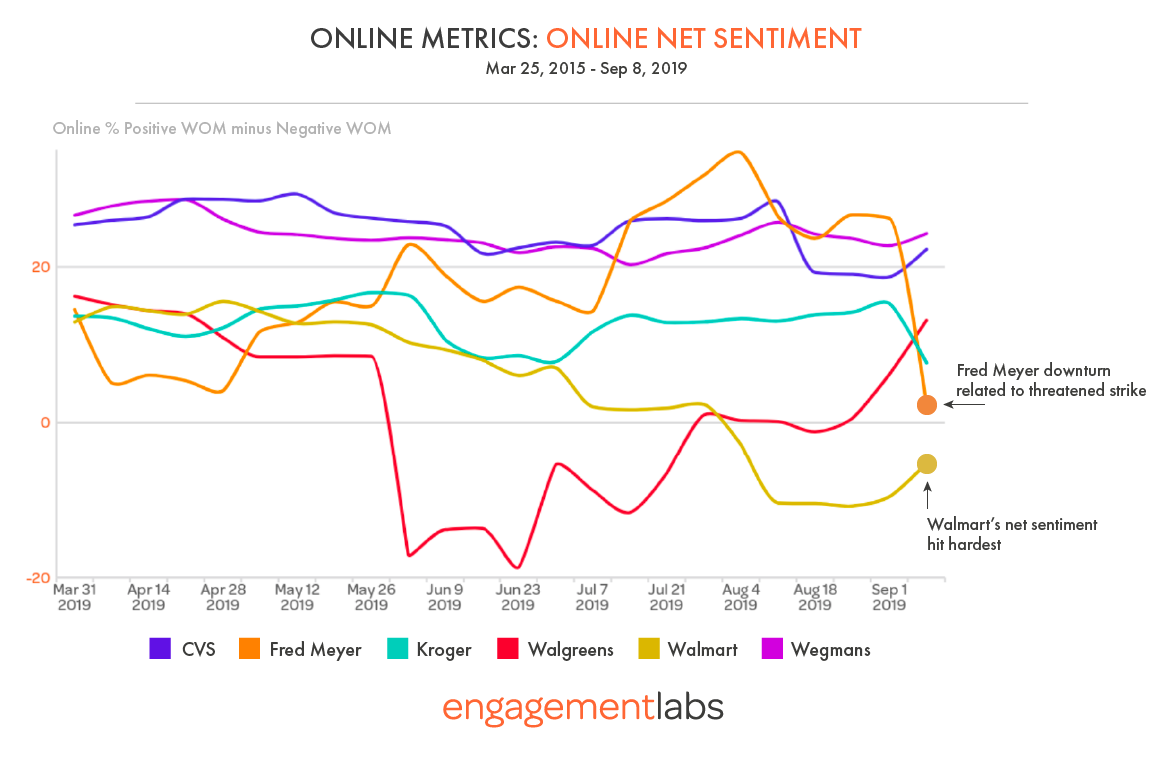 Retailer Fred Meyer, a subsidiary of Kroger, has seen its social media conversation turn negative, but other issues are involved, notably a threatened labor strike over compensation and pay equity.  A sixth retailer, Wegman’s, has held up in social media after announcing its policy on open carry, but its normally very positive offline conversations have deteriorated, more likely due to its efforts to eliminate plastic bags in all stores by year’s end. Thus, it is Walmart who has taken the biggest hit in social media over guns, attracting the focus of attention from critics.

What kind of impact might these businesses expect over the longer-term?  Based on the Dick’s Sporting Goods example, there is probably is more upside than downside for all of them. Despite predictions of serious harm to its business, the positive offline conversations were more predictive of future success than the negative social media discussions, as we reported last summer in MediaPost.

The fact that 145 companies are going public on the issue signals they have drawn a similar conclusion. Or else they have decided that the scourge of gun violence is so serious, it’s a business risk worth taking.