The Most Social Shows on TV: The First TotalSocial Perspective

In an age of snaps, tweets, posts, likes, texts and chats, the influence of friends, family and co-workers on what you watch on TV remains even more substantial. Have you made a viewing recommendation over dinner with friends for them to binge watch AMC’s The Walking Dead or talked about #thefeels you experienced with NBC’s latest hit This is Us at the water cooler?

What Shows Drive the Most from the Consumer Talk – Online AND Offline?
The Walking Dead was the most talked about shows both online and in person conversations during new season debut time period (9/12/16-11/27/16). American Horror Story was also high on both lists, as it was the 3rd most talked about offline, and 2nd online.

Five of the top 10 shows make BOTH the TotalSocial TV Offline AND TotalSocial TV Online lists, while five are unique to each. These shows cut across cable networks, broadcast networks and streaming services, a clear sign that any show has the capacity to become a significant part of the consumer conversation about TV. 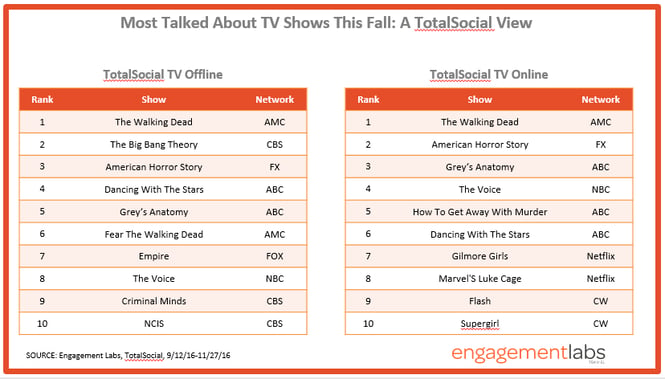 Unique to the offline list are three shows from CBS: The Big Bang Theory, NCIS and Criminal Minds. These shows tend to have an audience which is less active on social media, but they still garner a large viewership and generate a significant amount of offline conversation. FOX’s Empire just barely misses the online top 10 list, ranking at #11, showing a good balance in talk. At the other end of the spectrum, How to Get Away With Murder, The Flash, and Supergirl are broadcast shows that make the top 10 online, but not offline.

The remaining shows on each list provide an interesting illustration of the different dynamics of online and offline conversation. Social media chatter typically peaks around the season premiere episode and tapers off afterward, whereas offline conversation is more steady, or even sometimes grows over the course of a season. Fear the Walking Dead is an example of a show that premiered in August, outside the normal timeframe of the fall season. It maintained offline momentum to rank #6, but only ranks #34 online. Netflix’s Luke Cage, on the other hand, ranks #8 online while only ranking #65 offline and is bolstered by an exceptional spike in conversation volume during the week of its premiere on September 28th. A similar pattern emerged with Gilmore Girls, another Netflix program that launched on November 25th. With the quick nature of online talk, it is already the 7th most talked about show online, while it ranks only 53rd so far in offline talk.

Surviving a Winter Holiday Hiatus
The length of hiatus has been shown to have a strong impact on WOM levels – everyone experiences declines during the holidays, but the ones that come back in January are typically better off than the ones that wait until later in the season to return. Beyond the list above, according to TotalSocial for TV data, The Voice and Empire have the most upward Offline momentum (% change most recent 4 weeks vs. first 4 weeks of season) going into the holiday break out of the shows listed, and The Walking Dead has the most momentum Online.

For more information on TotalSocial™ or to request a demo, visit https://totalsocial.engagementlabs.com/

Want a better understanding of the online and offline conversations around your brand? Are you a journalist who wants to use real data to measure the brands you’re reporting on? Are you a company who wants to gain further insights into your brand's marketing strategies to develop effective campaigns to reach your audiences?

Request a demo today and learn more about TotalSocial by emailing sales@engagementlabs.com