Part 3: 28 Brands That Join a Select List, Commanding Both Online and Offline Conversation 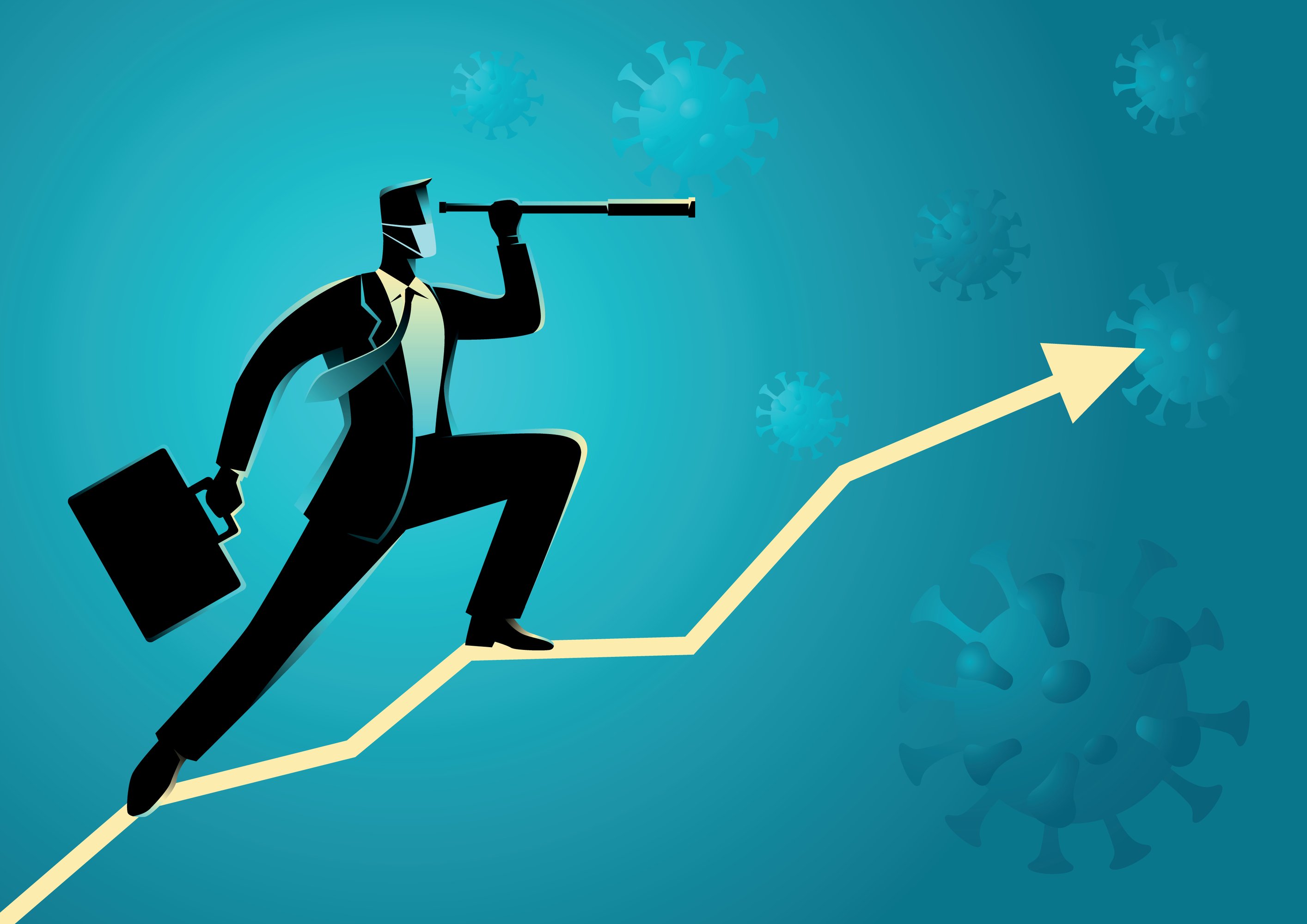 Nevertheless, 76 brands out of more than 650 measured manage to succeed both online and offline, earning the designation of a “Conversation Commander.” Among these brands, 28 achieved that designation just recently, during the COVID era, replacing 37 brands that have dropped out of the top classification. 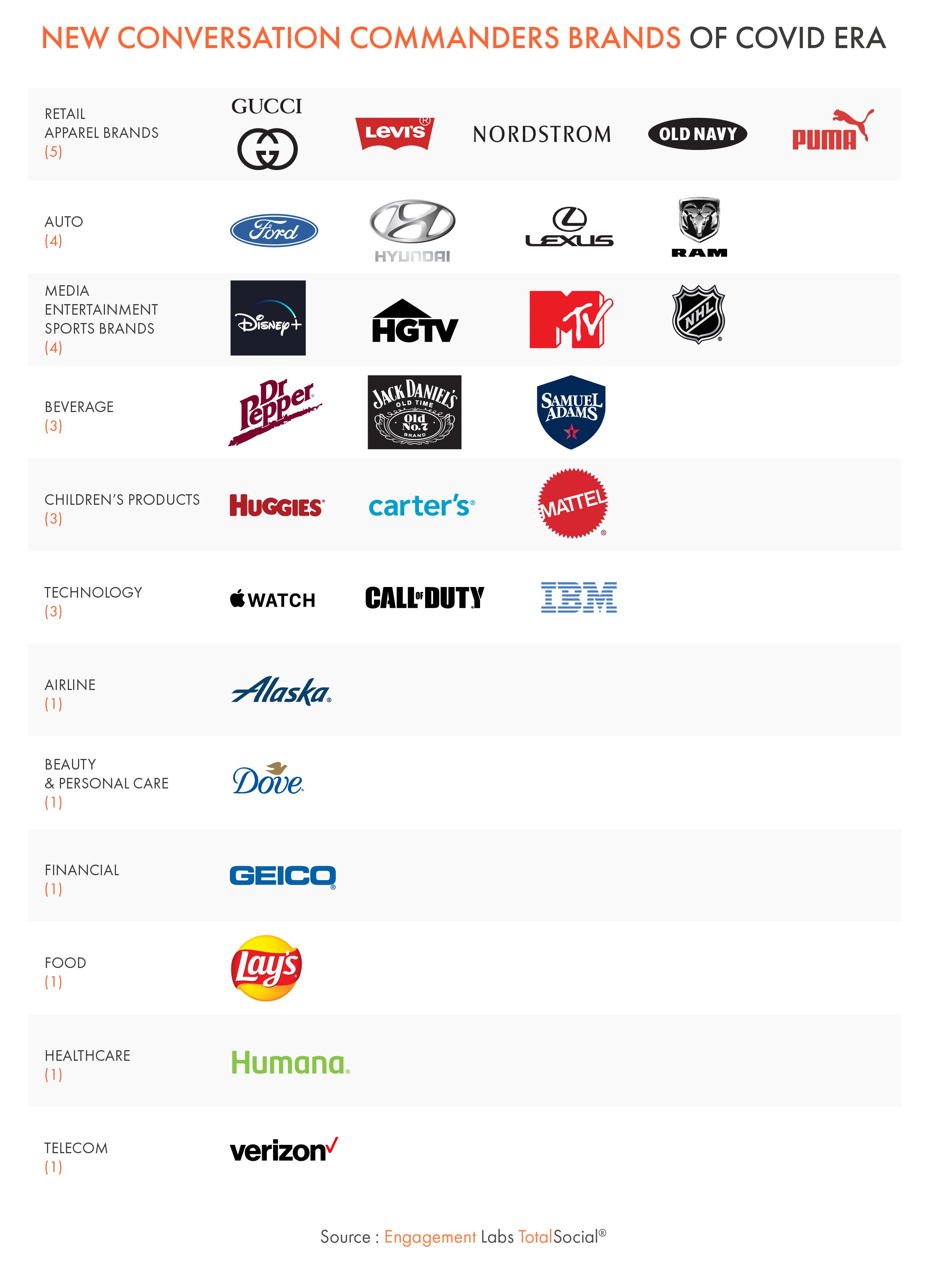 One key example of a rising brand is the Disney+ streaming service, a brand that is less than a year old, meaning it didn’t have a chance to be a Conversation Commander a year ago. Even so, Disney+ is now one of the strongest leaders both online and offline. On a 0-100 scale, Disney+ clocks in at a 73.1 for offline conversation performance, the highest among the new Conversation Commanders. It also earns a 58.4 for social media performance.

The other brand making the biggest leap into the Conversation Commander category also is a media brand: HGTV. Thanks to a dramatic rise in both offline and online net sentiment, reflecting much more positive conversation, HGTV is now one of the strongest conversation brands in Engagement Labs’ TotalSocial® measurement system. The HGTV brand has benefited from the new focus of consumers on home and garden improvement, the focus of programming on HGTV. 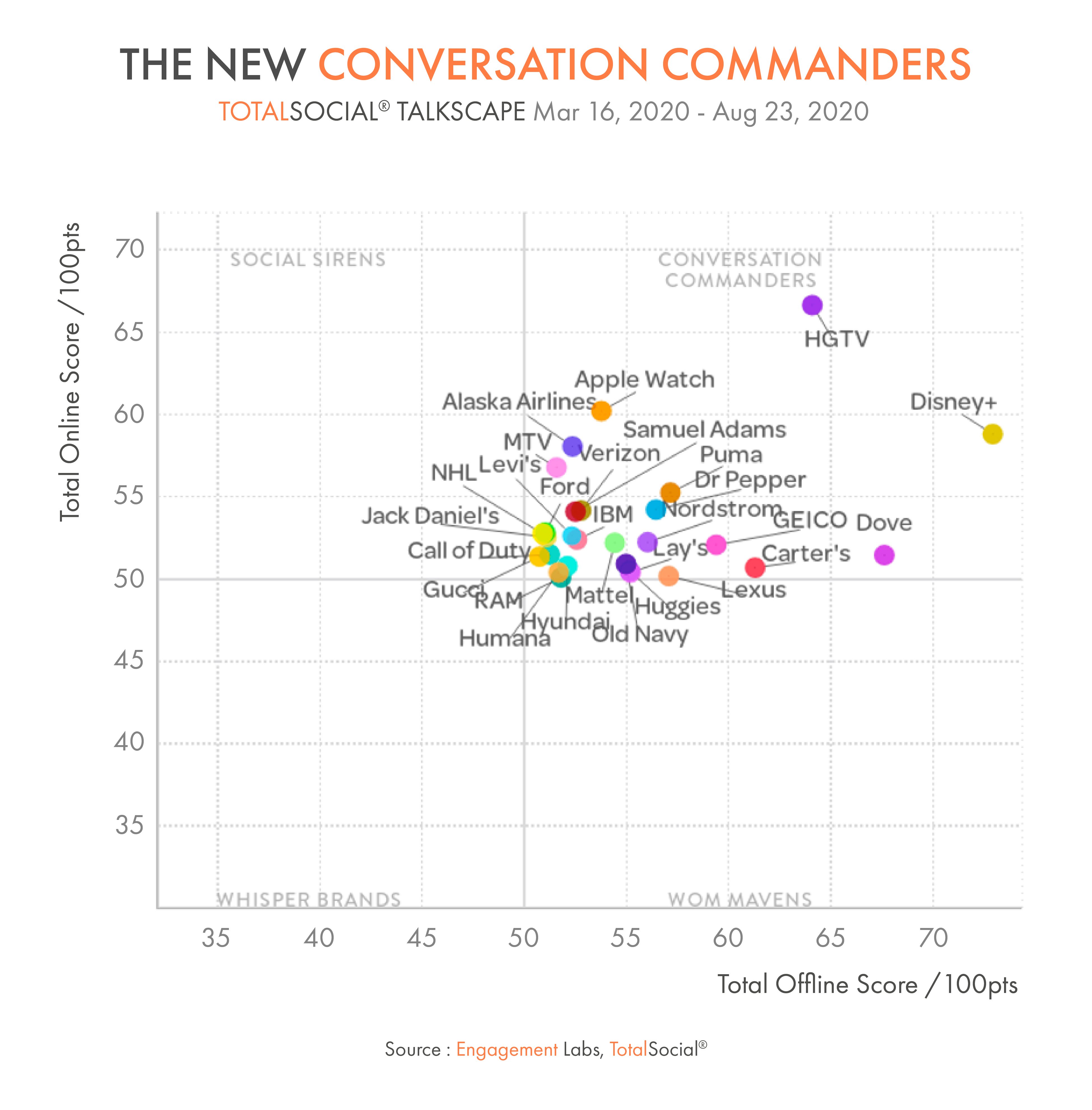 Outside of the media category, many other brands are gaining thanks to successful programs they have launched in response to the COVID-19 pandemic.

GEICO is a case in point. The brand moved sharply upward into the Conversation Commander quadrant thanks to dramatic improvements—both online and offline—in sentiment and “influence,” meaning well-connected people were talking about the brand. It is the only financial services brand to earn Conversation Commander status.

A likely reason is during the pandemic GEICO announced it would rebate 15% of customers premiums due to the rapid decline in auto accidents, for a total of $2.5 billion in rebates. The rebates were promoted in heartwarming, pandemic-themed commercials, including one that has been watched by more than 10 million people on YouTube.

Budweiser is the only brand in the beverage category to hold the Conversation Commander status for 2019 and 2020. Samuel Adams is the only other beer brand to move into the Conversation Commander for 2020 while many beer brands—Bud Light, Coors Light, Blue Moon, and Miller—have dropped out of that top right quadrant due to the closure of bars and restaurants where lots of conversations about beer occur. Sam Adams has done it by adapting their “Your Cousin from Boston” series of commercials to the COVID era with commercials depicting Zoom calls among friends. The brand also has launched an economic relief program for restaurant workers unemployed by the pandemic.

Although Samuel Adams remains one of the less frequently talked about brands in our TotalSocial system, the conversations about the brand are even more positive than before, especially offline conversations, and more of them are being stimulated by Sam Adams advertising and marketing.

Despite steep declines in the purchases of automobiles during the pandemic, Hyundai has become a Conversation Commander by improving both online and offline net sentiment. The company has been especially proactive in offering COVID programs to customers, including its job loss protection program that was first offered during the 2009 financial crises and donations for COVID testing. The brand also gained positive sentiment in April when it launched an Earth Day social media campaign with the K-pop group BTS in support of its new electric vehicles.

One impact of the pandemic has been increasing consumer engagement in basic product categories often taken for granted. Some of the fastest rising conversation volumes during the pandemic have been registered for household products such as Clorox and Lysol, and supermarkets like Kroger. Fitting that pattern, the Huggies brand from Kimberly Clark has moved into the Conversation Commander category. The brand has benefited from the new focus on necessities, and the brand has been responsive to the pandemic by donating 5 million diapers and $1 million in funds to economically strapped families.

Consumer conversation trends provide brands with an indication of the underlying strength of their brands at a time when consumer purchases are depressed by the pandemic, particularly in non-essential categories. Brands that have responded most effectively to the pandemic through changes in products, messaging, and marketing should be in the best position to rebound once the economy returns to normal. Importantly, brands need to remember that social media alone cannot provide a holistic perspective on their performance, given the lack of correlation between online and offline conversation.

A TotalSocial perspective is vital during these difficult times. And knowing that online and offline each drive positive business outcomes such as sales and brand health, it is a strategy that will reward those who succeed.