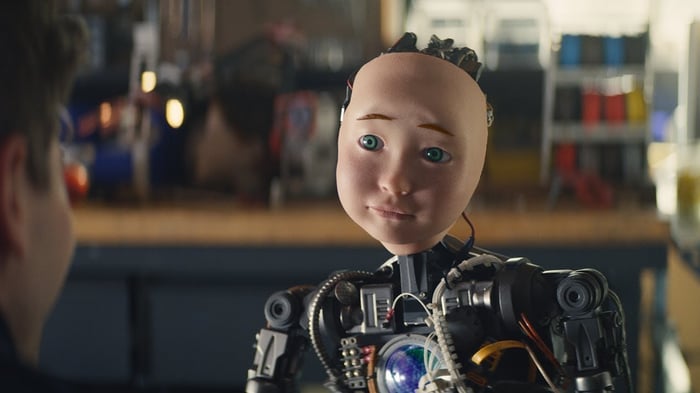 Two of the least popular 2019 Super Bowl commercials were among the most effective at stimulating both online and offline conversations, which research shows is a key factor in driving brand purchases.

According the USA Today’s Ad Meter, which measures fan reaction to Super Bowl commercials, the offerings of Olay skin care and TurboTax were among the least popular, ranked 30th and 56th, respectively, among 58 commercials measured.  Yet both brands were among the 10 biggest gainers in both online and offline consumer conversations during the week following the big game broadcast, according to Engagement Labs’ TotalSocial® measurement system.

TurboTax’s “Robo Child” commercial emphasized the humanness of its “CPA on Demand” by showing a childlike robot that lacks the emotional sophistication necessary to help people with their taxes. Another creepy commercial—called “killer skin” for Olay—showed actor Sarah Michelle Gellar reprising her role in the horror movie I know What You Did Last Summer. Chased by a creepy masked villain, Gellar’s character is unable to call for help because the facial recognition system on her mobile phone couldn’t recognize her recently softened skin.

Ad Meter voters didn’t like either commercial, but big game viewers talked a lot more about the brands after the Super Bowl, both on social media and in face-to-face discussions. TurboTax enjoyed a remarkable increase of 132% in offline conversation and a 135% rise in online conversation when compared to the weeks prior to the game.  Meanwhile, Olay enjoyed a 35% increase offline and a 41% increase online, impressive increases compared to the average advertiser which earned lifts of 13% offline and 123% online. Importantly, these increases in conversation have been shown to drive purchases, as reported in the current issue of the MIT Sloan Management Review.  The study found that conversations drive 19% of consumer purchases, on average, which translates into $10 trillion in annual consumer spending.

USA Today’s Ad Meter is not designed to measure marketplace impact, but rather, popularity.  USA Today announced its 2019 winners within hours of the New England Patriot’s plodding victory over the lackluster Los Angeles Rams.  The newspaper’s online Ad Meter voting system found that the National Football League won the ad contest for a glitzy house ad featuring numerous current and former NFL stars in a banquet room pick-up game.  Amazon and Microsoft came in second and third, respectively in the popularity contest.  But while the NFL drove a lot of additional conversations due to its ad—and the game itself—conversations about Amazon and Microsoft plummeted in the TotalSocial® system, possibly due to the weakness of branding in the commercials.

The conversation champ of the big game was Bud Light.  According to TotalSocial®, Bud Light drove a 91% increase in face-to-face conversations during the full week following the game, and more than a 1000% increase in social media conversations, thanks to a provocative series of ads that ended with an homage to the popular HBO series Game of Thrones. 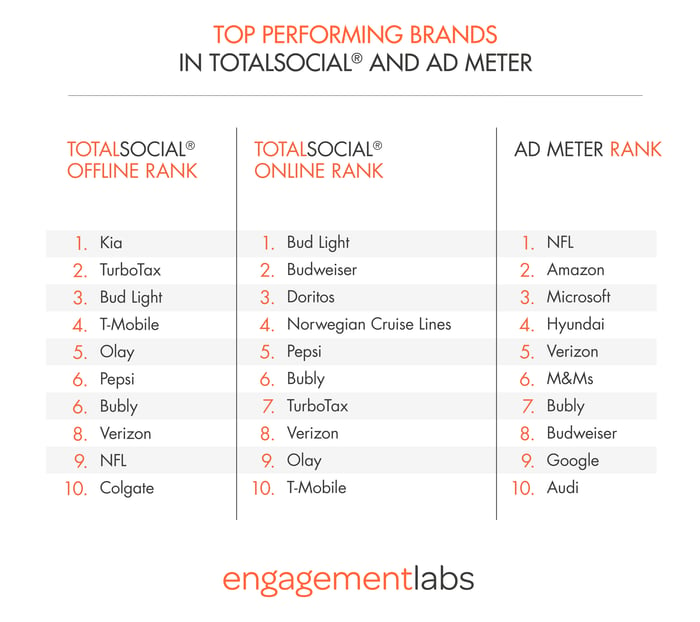 The success of TurboTax and Olay notwithstanding, ad creatives should not conclude that creepy always works.  Burger King’s “#EatLikeAndy” commercial showed a confusing vintage clip of the late Andy Warhol quietly eating a Whopper.  It was rated dead last among 58 commercials evaluated by Ad Meter.  It also earned the brand a 45% drop in offline conversations—the worst in TotalSocial—and a 14% drop in online conversations as well.

Consumers may like eating at Burger King, but they don’t want to eat like Andy Warhol—nor do they wish to talk about it, either.