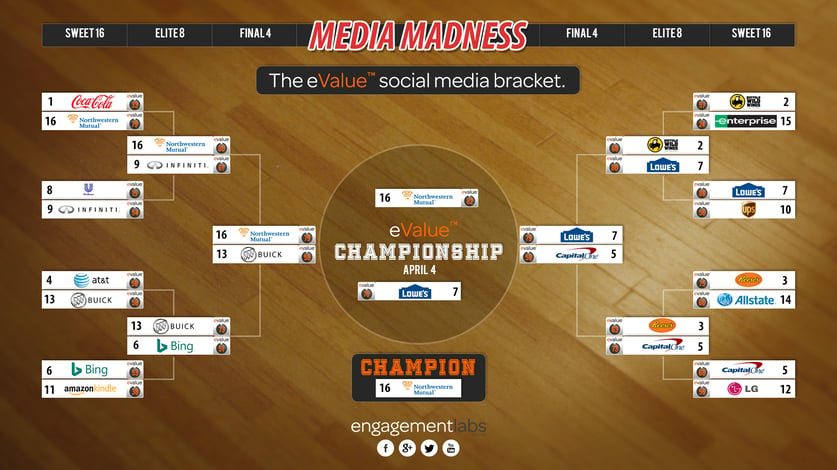 Welcome to the second annual eValue Media Madness bracket - the tournament where the top 16 NCAA sponsors fight for the social media championship title based on their eValue performance!

Based on their Facebook following as of March 14th, 2016, we’ve selected the following 16 NCAA sponsors to compete in this year’s Media Madness tournament: 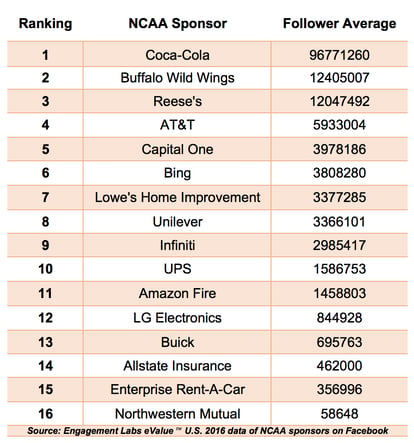 How Does it Work?

Taking a page out of March Madness' book, we’ve pitted the top 16 sponsors against one another in typical bracket fashion.

Starting from the Sweet 16 round taking place March 24th-25th, Engagement Labs will pull the eValue data for each brand the day before the round to compare each sponsor against their direct competitor.

Using a combination of Facebook and Twitter eValue Analytics data, the brand with the highest combined eValue score will be crowned the winner of the bracket and move on to the next round. The tournament will continue on all the way until the Championship game taking place April 4th.

As the tournament proceeds, we’ll be updating this blog post with the winners of each round, while providing some sneak peeks into how the winners dunked their way into the next stage of the game.

Last year saw UPS shoot its way to championship status, but will they be able to reclaim the title this year? Or will another sponsor step on the court to change the game?

Join us on March 26th, to see who moves on after the Sweet 16 round!

And we’re off to a surprising start! The 2016 Media Madness Sweet 16 saw some shocking results as several underdogs swept the court with some big competitors in the tournament.

#LowesFixInSix: Rescue small items from hard-to-reach places by placing a stocking on your vacuum extension. #Vine

Déjà vu anyone? Once again this year first seed Coca-Cola was defeated by last seed Northwestern Mutual in the first round.

Northwestern Mutual leveraged their association with the March Madness tournament on their social channels, generating the highest Engagement of all NCAA sponsors on both Facebook and Twitter.

Who's excited for #MarchMadness?

Coca-Cola attached themselves to the tournament this year as well, but did not gain as much traction on their posts as their competitor. Posting more frequently and at key moments during the tournament, the brand could have elevated their social channels during the event, particularly by using more of the hashtags such as #Sweet16 and #NCAA.

A special shout-out has to be given to MVP brands Capital One and Reese’s who created their own campaigns in honor of the tournament.

Capital One created their own series of ads of celebrities Spike Lee, Samuel L. Jackson and Charles Barkley going on their own March Madness road trip. Posting gifs, stills and clips from their ad series while using the appropriate hashtags, no shots were missed by Capital One, as they secured a spot in the Elite 8.

Also taking their affiliation with the tournament seriously, Reese’s continuously posted engaging and relevant content under their own #MarchMood campaign. The brand even went out of their way to frequently share and retweet followers who were discussing the tournament. 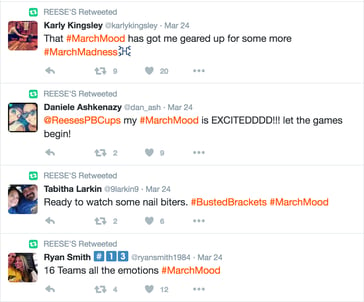 We now have our bracket for the Elite 8 which begins on March 26th. Congratulations to the sponsors who moved forward, but who will continue on to the Final 4? Join us after the Elite 8 on March 28th to see which sponsors move on to this year’s Media Madness Final 4! 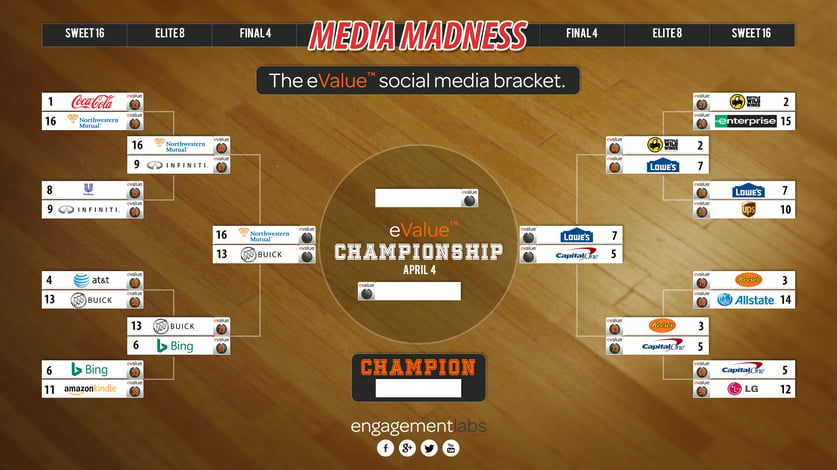 The tournament continued to twist and turn through the Elite 8 round, as we’ve whittled down to our Final 4 competitors...

Last seed Northwestern Mutual continued its rise to the Final 4 by using its best player - its association to the March Madness tournament. Consistently attaching itself to the event, the brand earned the highest eValue score and Engagement of NCAA sponsors on Facebook.

Dedication = every Saturday and Sunday. 6:00 a.m. 100 shots from around the arc. Follow your dream. Start with a plan. Get there. #MarchMadness Posted by Northwestern Mutual on Thursday, March 24, 2016

The insurance brand’s most engaged post leading up to the Elite 8 round earned up to 2,400 likes by relating the dedication of March Madness players to one of the brand’s running messages - reaching your goals by starting with a plan. This combination of positive brand messaging with popular mass-media event honed in on follower emotion, thereby getting fans more engaged.

The tightest match of the round was when our two MVPs from Sweet 16, Capital One and Reese's, squared-off in their own social media dunk contest. Reese’s unfortunately was no match for Capital One’s celebrity-filled March Madness campaign.

The brand’s excellent stats didn’t stop there as they scored the highest Responsiveness of the sponsors on Twitter by retweeting and responding directly to fans who were turning to the channel to talk all things March Madness.

Emerging as the frontrunner in the Sweet 16 round, Lowe’s Home Improvement knocked down second seed Buffalo Wild Wing’s to secure a spot in the Final Four. Meanwhile, Buick dribbled its way past sixth seed Bing to also make it to the semi-finals.

While both brands scored well during Elite 8 through brand-related engaging content, the brands should take a page out of the books of Northwestern Mutual and Capital One by leveraging their association with March Madness to really solidify a position in the Championship round.

So there we have it folks - our final four! We have the underdog Northwestern Mutual going up against the popular auto brand Buick, while the always handy Lowe’s Home Improvement battles it out with the current MVP, Capital One.

Who’ll make it past the Final 4 to face-off in the Championship game? Tune in April 3rd to find out! 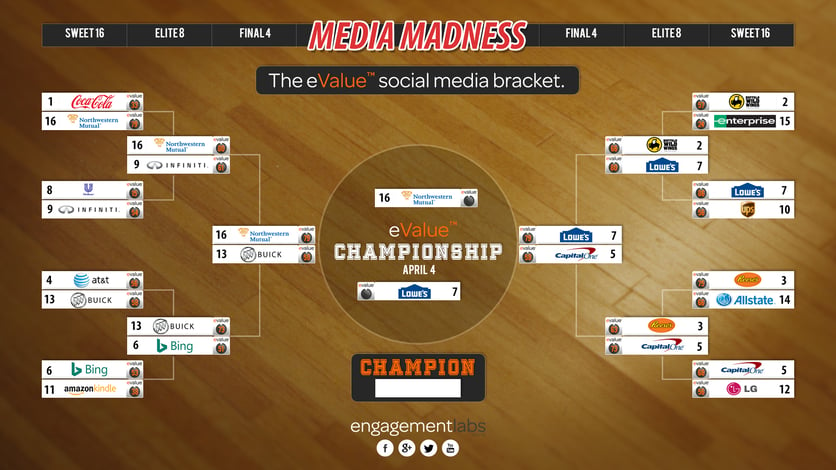 There we have it folks - our two finalists! The tournament has never been closer, with underdog Northwestern Mutual and early frontrunner Lowe’s Home Improvement tying for the same combined eValue score in the Final 4 round.

Both the finalists dunked on their respective competitors eliminating remaining top seed Capital One and popular automotive brand Buick.

Northwestern Mutual is truly rebounding this year learning from their mistakes that eliminated them in the Final 4 round last year. The brand maintained their first place standing on Facebook with an impressive Engagement score of 90.07 - well ahead of any other sponsors.

How is their content scoring more than the other teams? They’re associating the March Madness tournament with their brand’s key messages about investing early and starting with a financial plan.

Follow your dream. Start with a plan. Get there. #MarchMadness #FinalFour Posted by Northwestern Mutual on Friday, April 1, 2016

Highlighting the inspirational journey of March Madness basketball players, the brand is tapping into human emotion and tying it into their services. Northwestern Mutual’s shots don’t stop there, as the brand follows the tournament in real-time, thereby capturing the attention of fans tuning in for every round.

And then there were 4... #MarchMadness #BigDance #FinalFour Posted by Northwestern Mutual on Monday, March 28, 2016

Lowe’s solidified their Championship game spot through active responses. Scoring the highest Responsiveness scores on both Facebook and Twitter, Lowe’s made a point to respond to all customer comments, positive or negative, on their channels. The brand even retweeted customers who thanked the brand for their service. 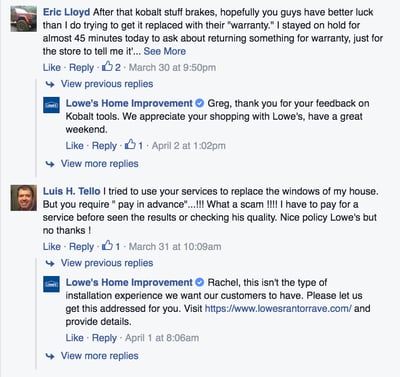 This is it. The Championship game is on April 4th and it comes down to the most competitive match of the tournament!

Who will claim the 2016 title of social media marketing champion for NCAA sponsors? Will last seed Northwestern Mutual complete their comeback or will Lowe’s make a last-minute victory short? Find out on April 5th!

It’s a Cinderella story come to life as the brand started as the last seed, overtaking first seed Coca-Cola in Sweet 16 and soaring all the way to the top to score a clutch shot against early frontrunner Lowe’s Home Improvement.

How did the underdog achieve social media greatness? Let’s recap how Northwestern Mutual shot their way to the top!

Thanks to all the sponsors participating and to you for following along with our 2016 Media Madness! It’s been an exciting tournament and we can’t wait to see how it will all play out in 2017. Until next year!

For more information on eValue™ or to request a demo, visit www.evaluesuite.com

The eValue™ score measures the effectiveness of a brand’s overall social media performance on Facebook, Twitter, YouTube and Instagram and provides a score from 0 - 100. It’s the aggregate of the three subscores including Engagement, Impact, and Responsiveness that work together to create one top-level KPI. Our subscores are calculated by using hundreds of sub metrics which are then benchmarked against a hand-picked database of 75,000 verified brand accounts on each channel.