Armchair Nation: Consumer Conversation Trends Give New Meaning to “Must See TV,” as Home Entertainment Becomes a Necessity of Life

Conversations are not just buzz. They are predictive of consumer purchases; they also reveal changes in consumer lifestyles and interests. As consumers have settled into their new pandemic era routines, between mid-April and mid-July, no category has grown more than media and entertainment. The biggest rising brands are Netflix, Amazon, Disney+, CNN, and Hulu. We have become an armchair nation.

The increases are dramatic. The number of times people have been in a real-world conversation about the Netflix streaming platform has grown by 59 million per week, a 75% rise compared to a year earlier. Amazon eCommerce conversations are up 38 million and discussions about the Amazon Prime streaming and shopping membership have grown by 22 million, for a grand total of 60 million additional conversation impressions per week for Amazon. Disney+, only launched last November, is the third-fastest rising media brand in conversation (+31 million), followed by CNN (+28 million) and Hulu (+27 million).

Despite the rise for entertainment brands generally—and streaming in particular—category is not destiny and not all brands have benefited. Talk levels for Sling and Roku remain very low, and newcomers Peacock and HBO Max have barely registered at all.

The armchair nation era is also driving up conversations about television networks. In terms of volume, CNN and Fox News are up the most, as millions of Americans tune into and talk about coverage of the pandemic, Black Lives Matter protests, and economic hardship.

Indeed, both CNN and Fox News hit 50 million weekly conversation impressions in April, the highest levels we’ve measured for them in five years. Since then, something interesting has happened: CNN has continued to grow in conversation volume, to 55 million impressions per week, while Fox News has declined, to 37 million, which corresponds fairly well with the ratings picture. CNN just reported its highest ratings for any three months in 40 years, with faster audience growth than either Fox News or MSNBC, which remains a distant third-place among the news channels, with little increase in talk. 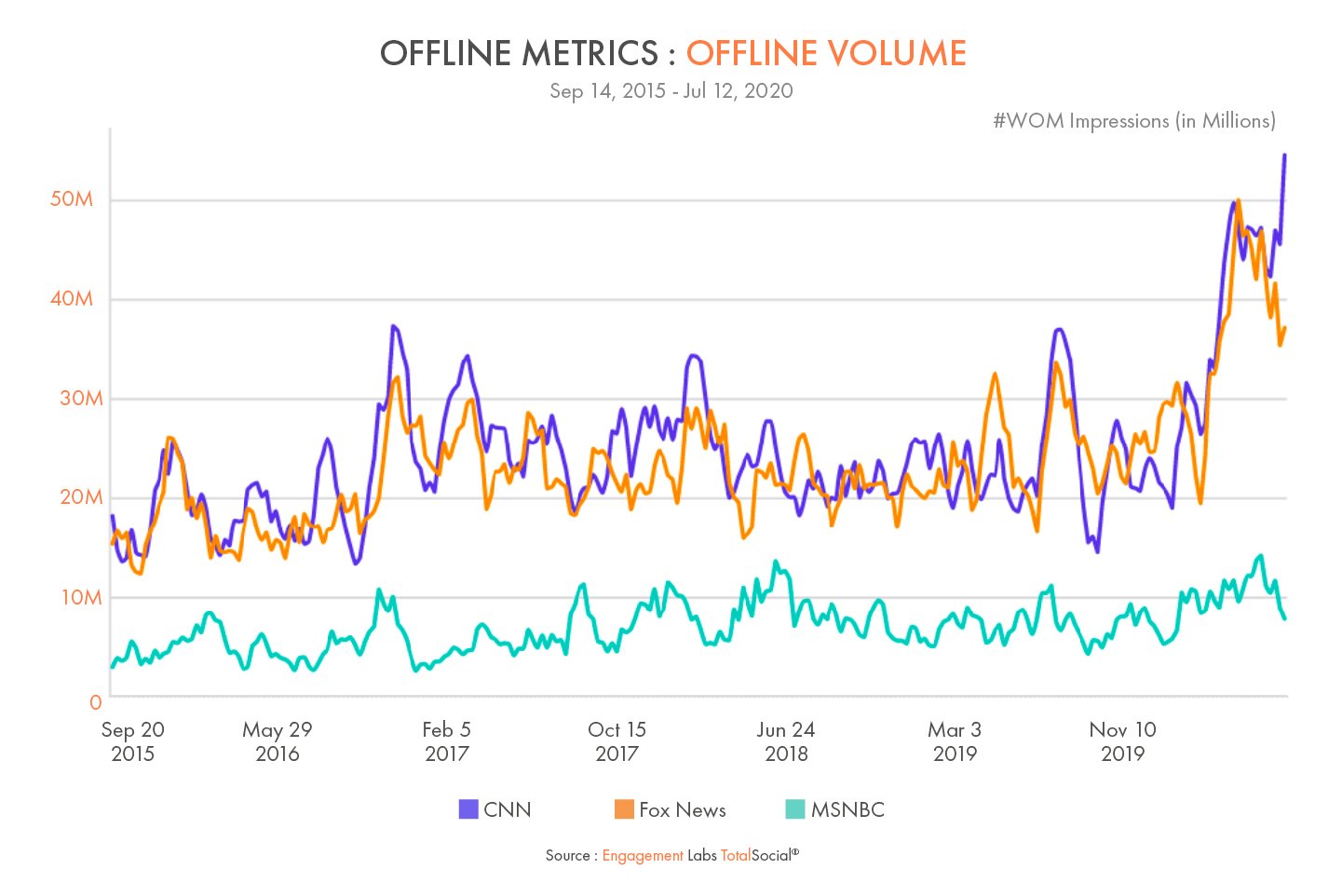 Put into a broader context, the rise of CNN and Fox News stands out relative to every other cable and broadcast networks measured. HGTV enjoyed a rise in conversations in April, as the early days of sheltering at home generated an explosion of interest in home and garden projects. As HGTV has returned to normal levels, its sister networks Discovery and Food Network were seeing slow-but-steady gains into the month of July. 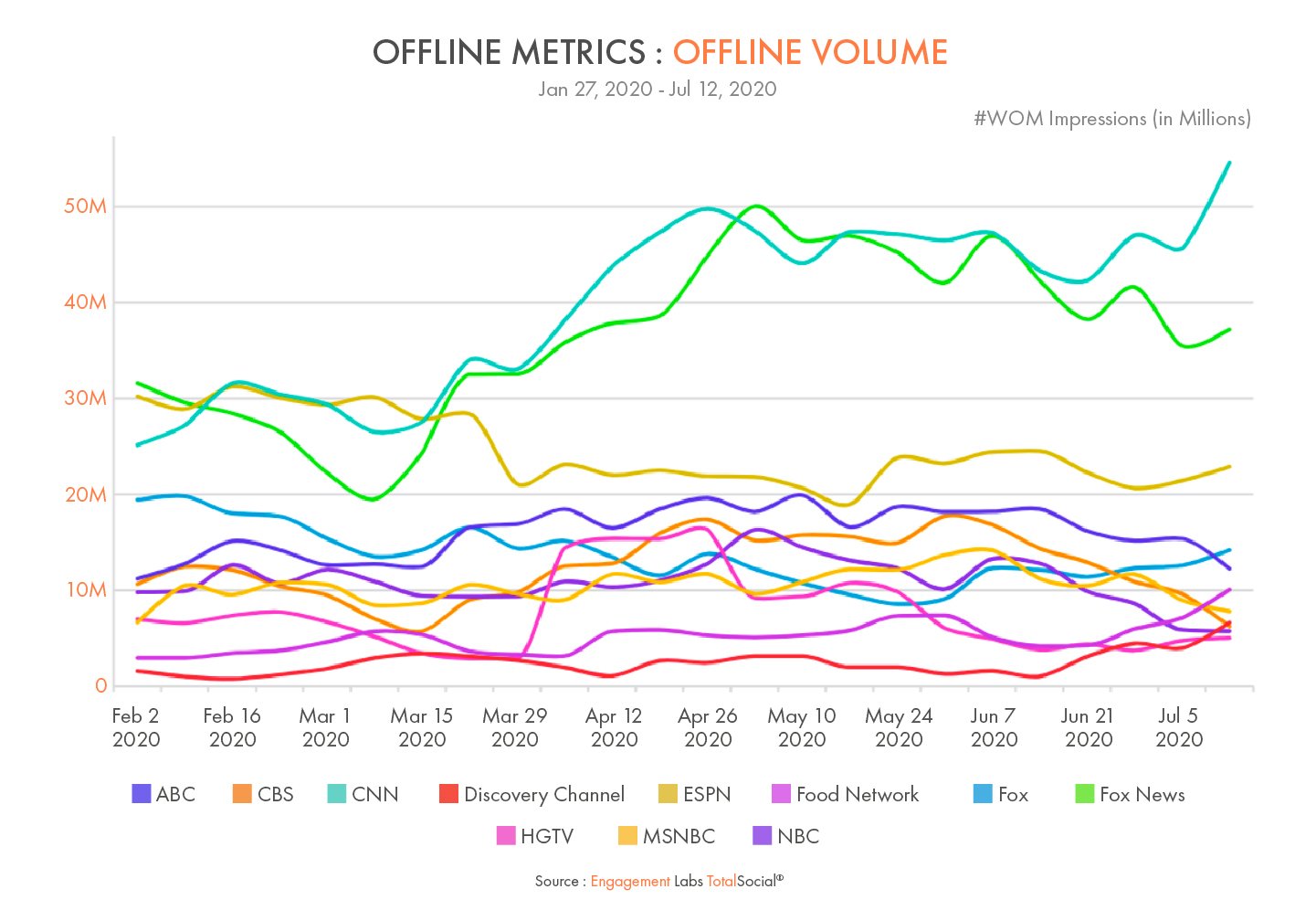 The traditional broadcast networks—ABC, CBS, NBC, Fox—enjoyed rises in April and May, but have since lost ground to the news channels as new network programming transitioned to summer re-runs, and the news channels responded to breaking news related to the health crisis and protests against racial injustice.

Despite the lack of live sports, ESPN remains the third most talked about network, after CNN and Fox Network, with only a moderate loss of conversation during the pandemic period, reflecting persistent demand for sports content by frustrated fans willing to watch sports news and playoff reruns.

Speaking of sports, the classic armchair topic, sports talk is down 7% overall due to a collapse of conversation about inactive MLB and NBA teams, which normally would have earned lots of conversation in spring and early summer. With those sports suspended, there has been little reason for fans to spend hours speculating about the Yankees versus Red Sox or whether the Golden State Warriors will return to the championship series in 2020. But talk about the major league brands rose dramatically, by 33 million weekly conversation impressions, amid months of “will-they-or-won’t-they” discussion related to management and player negotiations on pandemic-abbreviated seasons.

SPORTS LEAGUE CONVERSATIONS HAVE HELD UP DURING PANDEMIC 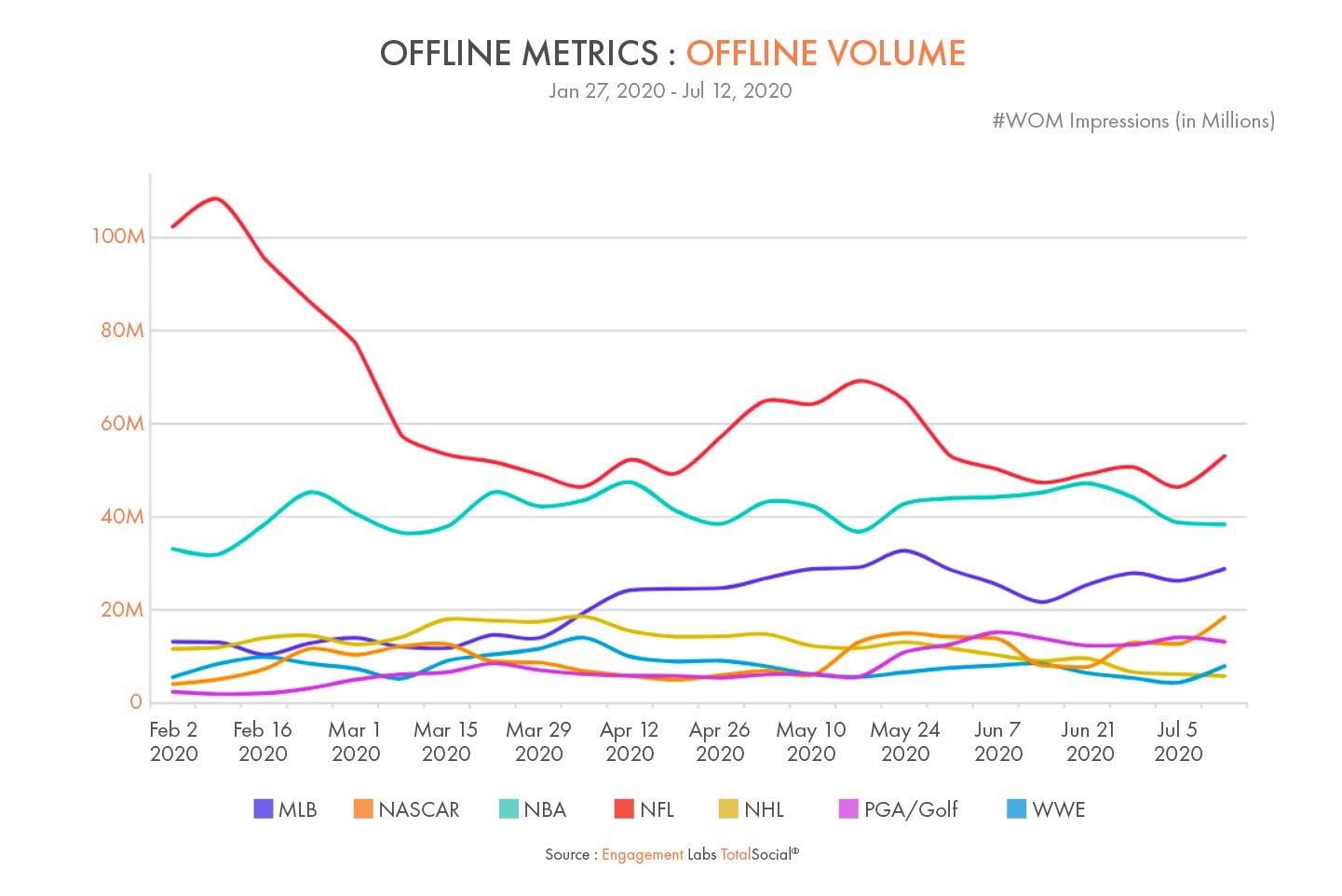 Although not due to start until September, offseason talk about the NFL is way above normal, fueled both by questions about whether and how games will be played this fall, and by the NFL’s dramatic reversal in June regarding the Black Lives Matter movement.

As we have seen with other politically charged topics, the online and offline conversation reaction to the NFL’s new position have been very different. The NFL has maintained a moderately positive offline conversation even as the social media conversation has turned sharply toward the negative at the time commissioner Roger Goodell admitted the league’s error in previously opposing player protests over police violence against African Americans. 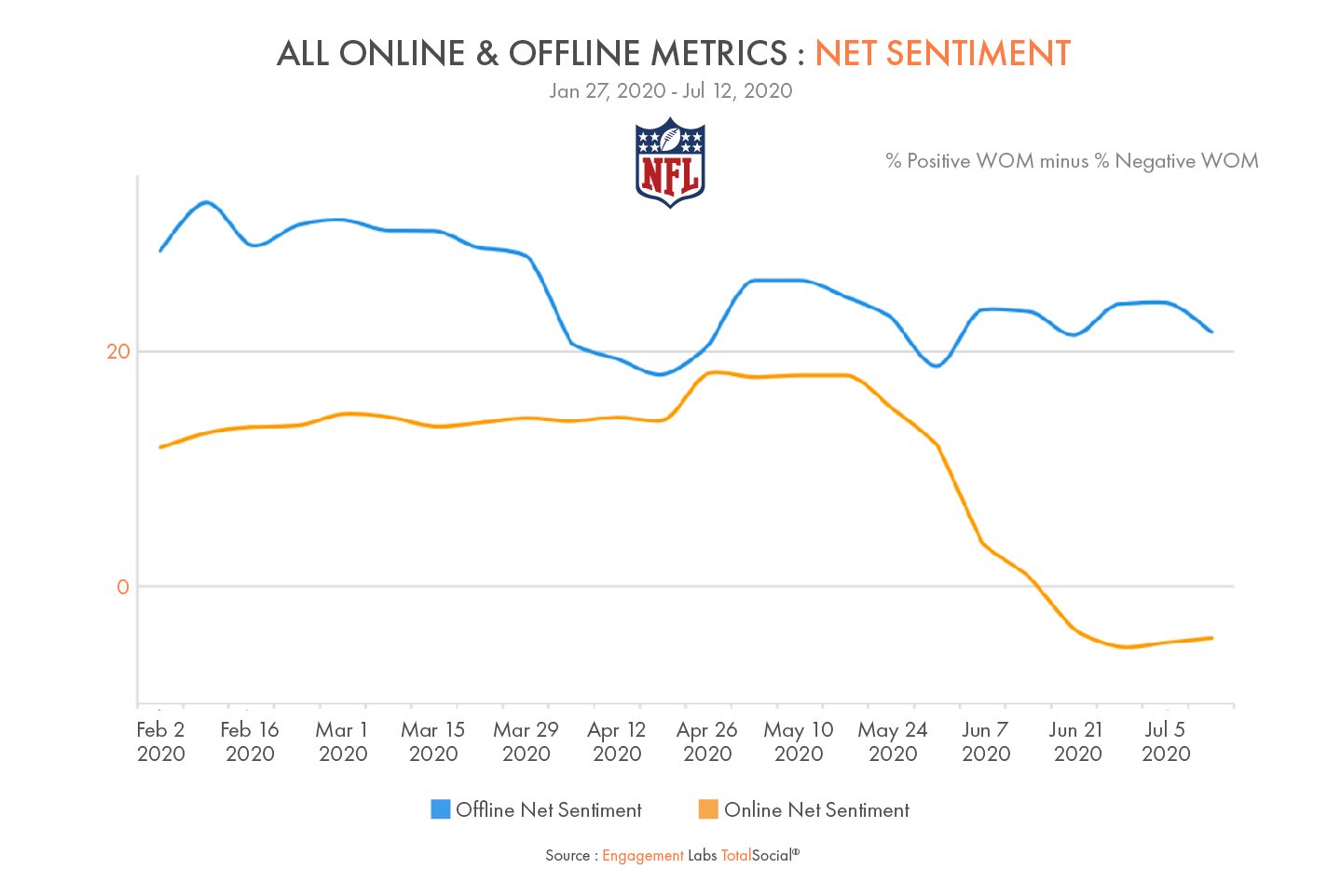 The sentiment picture is particularly good for PGA Golf and WWE wrestling, two sports that got back to play ahead of the others. The net sentiment of PGA talk in June, the month it returned, hit a peak of more than 60 points more positive than negative, perhaps reflecting the joy of fans at the return of live sport. Anticipation of an NHL Stanley Cup playoff tournament also appears to be driving up sentiment for the NHL recently.

RETURN TO PLAY DROVE UP SENTIMENT FOR NASCAR, GOLF, WWE 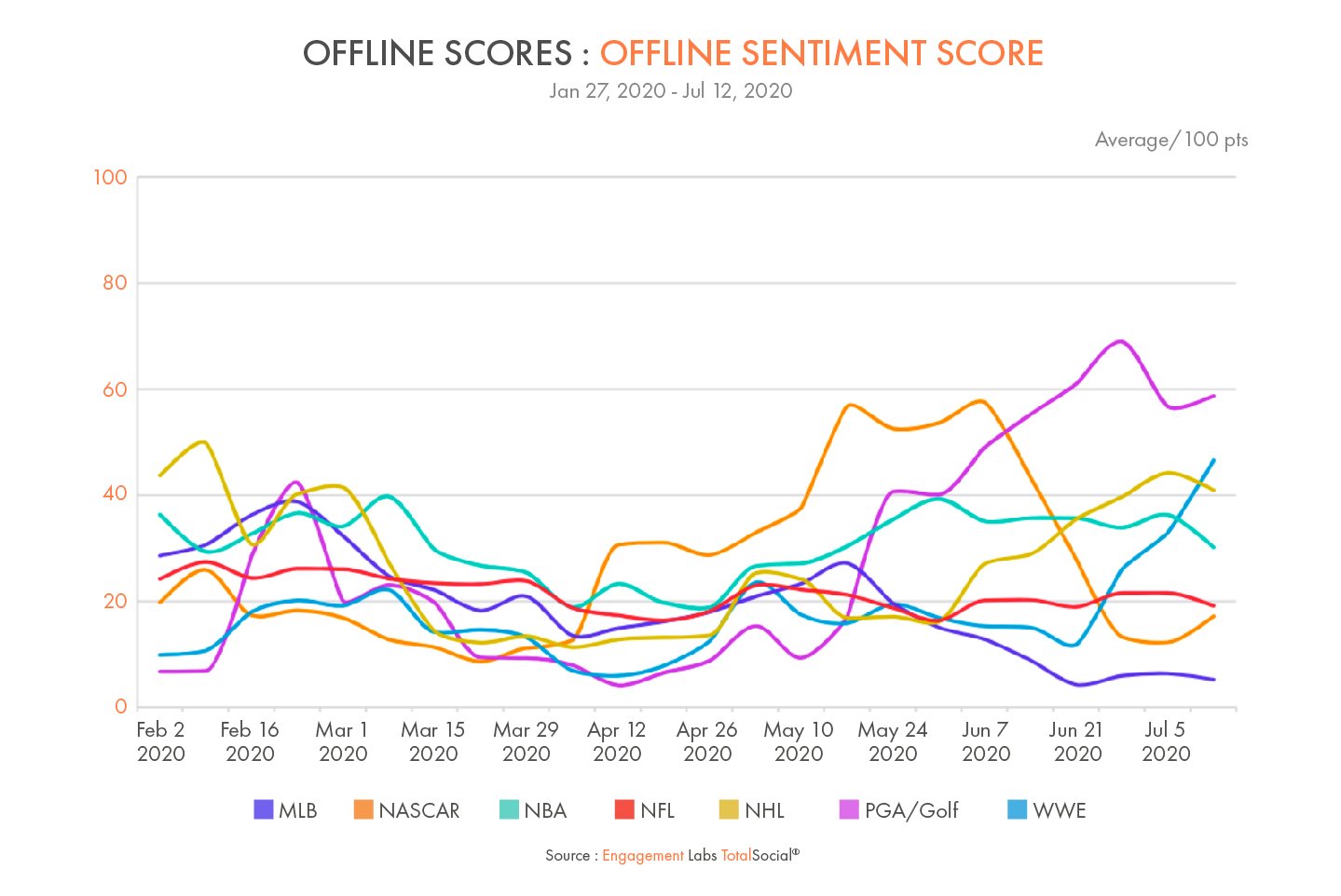 NASCAR also enjoyed a bump in sentiment in May and June, thanks to an early return to competition, although that dropped sharply following the league’s decision to ban the confederate flag and the reaction to a suspected hate crime against the league’s one black driver, Bubba Wallace.

Among the leagues, only Major League Baseball managed to suffer a sustained, negative sentiment trend during the pandemic, as the league and players’ union publicly quarreled about the circumstances of a return. The downward trend in MLB conversation sentiment was particularly steep in offline conversations, moreso than in social media.

Net Sentiment Online and Offline Trend for MLB, since January

Conversation trends indicate clear pandemic era rules for media companies and brands. Consumers continue to be anxious about the current health, economic, and social situation, driving demand for news higher than ever. They need to be informed and supported. At the same time, they are desperate for home entertainment.

As Americans feel stuck in their living rooms, they are demanding quality entertainment. They expect networks, streaming services, and sports leagues to behave as the necessities of life they have become.