Biden Enjoys a Strong Word of Mouth Advantage in Swing States, Even as It Fades Back Nationally

Word of Mouth Among Women Strongly Favors Biden, Among Men it Favors Trump 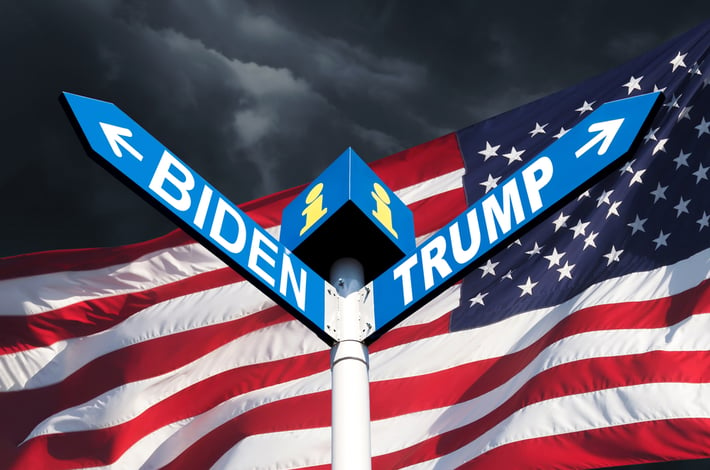 Presumptive Democratic nominee Joe Biden was winning the national conversation in late May and early June as the triple crises of racial justice protests, economic calamity, and global health pandemic raised serious questions about President Trump’s leadership, and Biden had several high profile public appearances that helped drive sharply higher sentiment. But that national conversation advantage disappeared during the second week of June as enthusiasm for Trump returned among Republicans, as did ambivalence about Biden among Democrats.

When one calculates the net sentiment of conversations by subtracting negative from positive, both candidates are in the negative, as we’ve typically seen for political candidates. When looking at data in the week leading up to Trump’s rally in Tulsa, Biden barely leads Trump by 4 points in mid-June, -34 to -38, after enjoying a big advantage of nearly 40 points a week earlier. 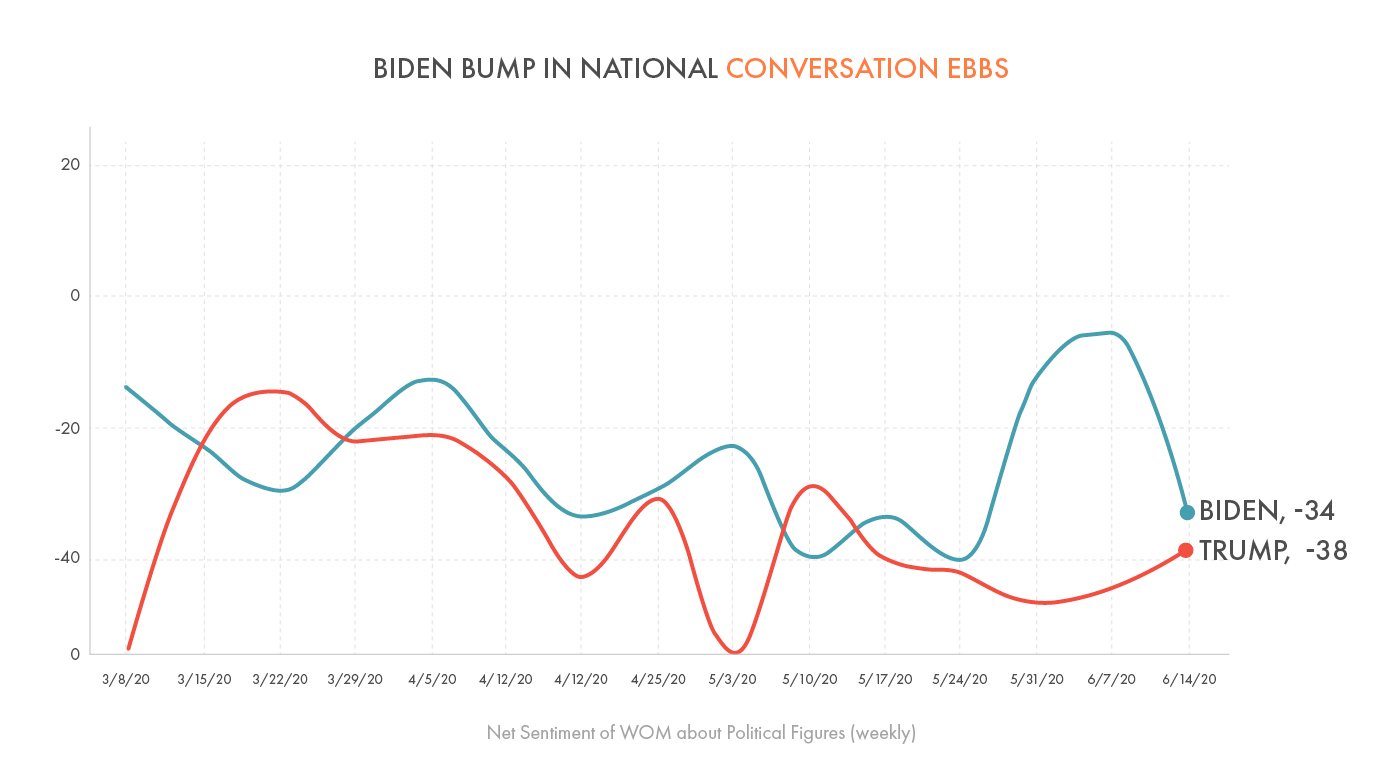 In the states rated “toss-ups” in the Cook Political Report, Biden remains in a remarkably strong position with a positive net sentiment of 4 versus Trump’s deeply negative net sentiment of -47. The toss-up states include Arizona, Florida, Michigan, North Carolina, Pennsylvania, and Wisconsin. Biden’s advantage is similar even when you add in the “leaning” states of Maine, Minnesota, and New Hampshire. 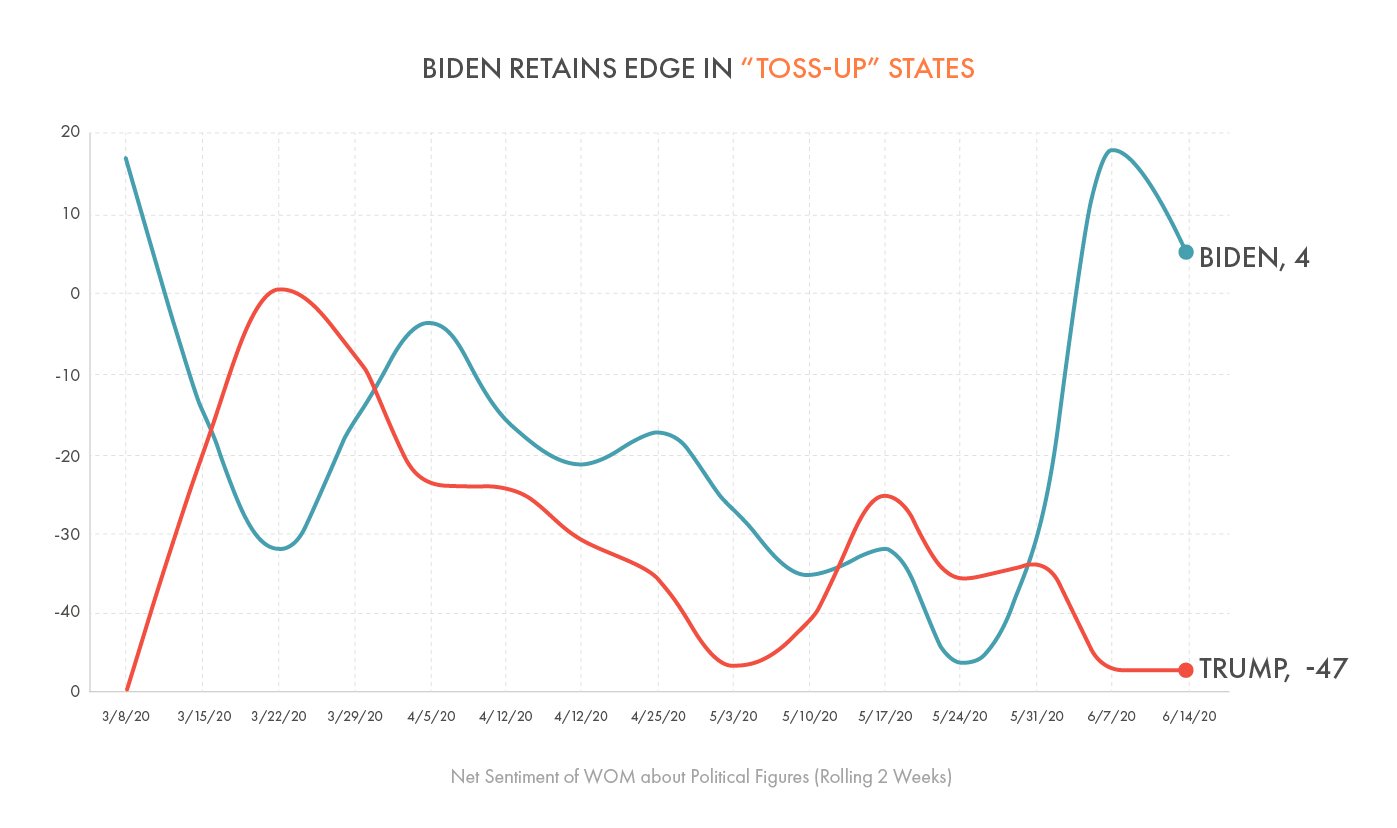 Among women, net sentiment of conversation for Biden is more than 30 points higher than for Trump, while men are more than 20 points more positive for Trump over Biden.

The gender gap is not all that surprising in light of the consistent advantage Biden in 2020 and Hillary Clinton in 2016 have held over Trump among women voters in pre-election polls. The toss-up and other “in-play” states are another thing altogether. These are the states that will almost certainly determine the Electoral College winner, and they are showing a stronger bias in conversation polling versus traditional preference polls.

In 2016, conversation trends turned out to be prescient in recognizing the impact of the Comey letter in late October in throwing the election to Donald Trump. This is not October, of course, but right now it appears to be Biden who is benefiting from the national conversation in key states at a time of multiple national crises.