A dramatic week in the news had less impact that one might have expected on conversations, as the new Bob Woodward book, an anonymous OpEd by a member of the White House “resistance,” and the Senate Hearings on Supreme Court nominee Brett Kavanaugh did little to fundamentally change the national political dialog versus the prior week.

“Net Sentiment” Most Negative for “Republicans in Congress” Through Sept. 9, 2018

Although still low among Trump conversations at 27%, talk about upcoming elections are slowly but steadily rising. 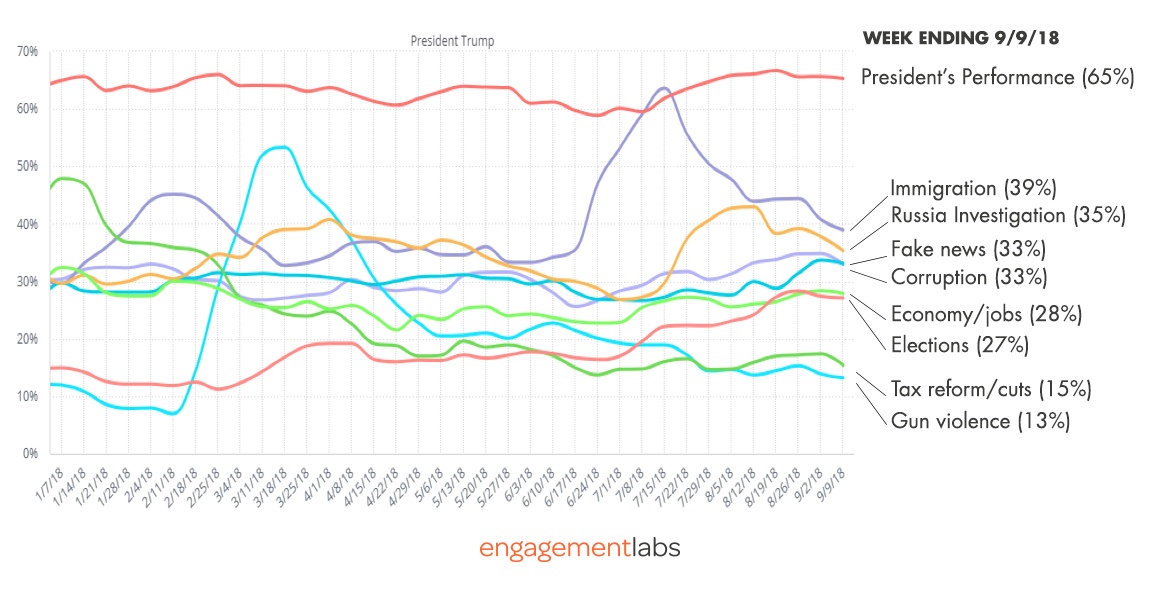 Issues that Motivate Partisans in Midterms

While much of the talk about politics is negative, members of each party do have positive things to say about their own members of Congress, which can be revealing about how to motivate turnout.

Among both parties, but especially among Democrats, the dominant topic is simply the elections themselves, now just eight weeks away.  Among all positive conversations that Democrats are having about “Democrats in Congress,” the leading topic is the upcoming elections, mentioned by 48%, far ahead of a collection of second tier topics, including the Supreme Court and the President’s performance (both 27%), the Russia investigation (26%) and immigration (25%).  The economy ranks surprisingly low at 22%, barely ahead of gun violence and corruption (both at 20%).

Topics of Positive Conversations Democrats Have about Democrats (Selected topics)

On the Republican side, their leading positive conversation topics about Republicans in Congress are also about the upcoming elections, also mentioned by 48%.  Closer behind than among Democrats, second tier issues are immigration (34%) and corruption (32%).  The President’s performance is a positive topic in 28% of these conversations, as is the economy (26%) and the Supreme Court (26%).  The Russia investigation is not frequently a positive conversation topic among Republicans, at 22%, similar to the frequency of such talk about the tax cuts (21%).

Given that the biggest legislative achievement of the last term was the tax cut/reform bill at the start of 2018, and the economy continues to be strong, the infrequency of positive conversations about these topics among the Republican base is surprising.

Topics of Positive Republican Conversations about Republicans in Congress