Consumers Like to Talk Offline About Big Box Retailers

The clash between big box retailers and e-commerce titans is well underway, and some industry experts aren’t optimistic about the outcome for brick-and-mortar stores.

Former department store executive and CNBC contributor Jan Kniffen told the network recently that retailers are preparing for a “huge battle” in the wake of the Amazon-Whole Foods merger. "We're going to see online and brick and mortar merge into one big entity." 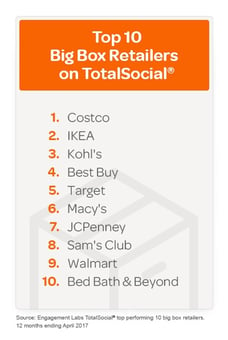 Make no mistake, however. Offline conversations are what continue to buoy the sales of big box retailers. Online conversations -- via social media, ratings and reviews, or blogs and forums – are important. However, they represent only the tip of the conversation iceberg. Lurking below the surface – less visible and thus often overlooked, are billions of word-of-mouth impressions that occur each day via face-to-face conversation. While both types of conversation are nearly nearly equal in their contribution to sales, the sheer volume of real-life conversations makes them more important.

One big box retailer that is performing well in sales is Costco, and it’s also ranked first in our analysis of the category. But its TotalSocial performance is largely driven by a particularly strong offline performance. In fact, its online scores are so low that the retailer doesn’t even place among the top 10 in its competitive set.

Yet, to fully capitalize on the power of social influences, Costco and other big box stores need to understand and activate both forms of conversation. That means these retailers have an opportunity to improve sales by optimizing their performance online.

For example, Costco also ranks first for offline sentiment, demonstrating that despite criticisms about the company’s slowness to adopt an e-commerce strategy, its positive in-store experience, consistent focus on wholesale prices and quality merchandise is a strategy that resonates with its members in their offline conversations.

Consumers like to share, or even brag, about the great deals they find, and Costco clearly benefits from this. However, while it has particularly strong offline scores – especially offline volume, sentiment and influence – its weak performance online means the retailer is not fully capitalizing on the power of social influence. It has an opportunity to increase sales by developing strategies to improve its online performance, and now, with Amazon’s bid for Whole Foods, Costco has a strong incentive to do so.

One final note: Walmart, which is ranked as the top retailer by sales, according to the National Retail Federation, ranks at number nine in our TotalSocial analysis of big box retailers. While it leads the category for both online and offline volume, its sentiment scores leave substantial room for improvement, offline and especially online. Although the retailer is generating a lot of conversations, they aren’t positive enough. The low online sentiment score is a particular challenge for Walmart as it seeks to compete more effectively in e-commerce, as reflected in its recent acquisition of Bonobos.

To learn more about social influence on and offline take a look at our latest e-book, 5 Myths and 5 Realities of Social Influence.