Conversations About NBA Are Up the Most—Also, NFL, MLS, MLB, and Video Games 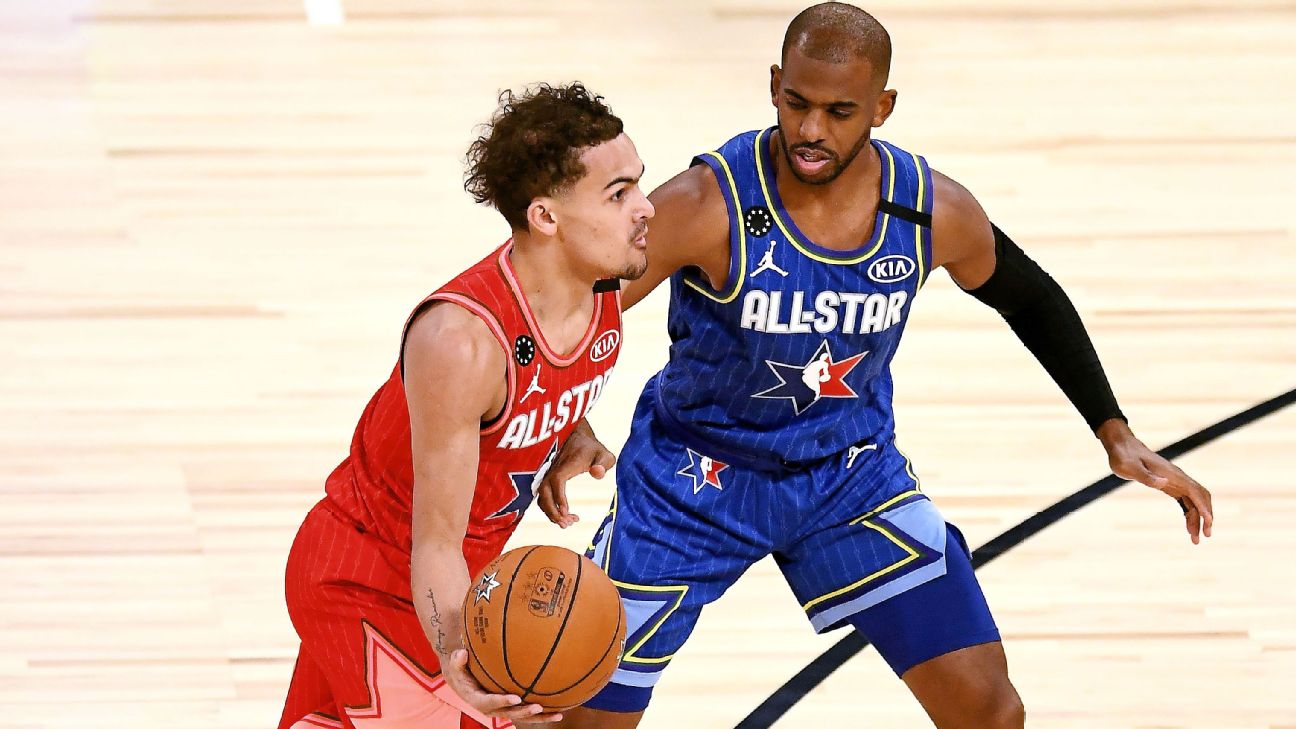 “Absence makes the heart grow fonder” is a saying that goes back several centuries.  Amid today’s historic pandemic, absence is promoting not only fondness but also the gift of gab among sports fans.

The pandemic is forcing Americans onto the couch in springtime, but without Spring Training and Opening Day of America’s pastime, baseball, nor virtually any other televised sport. Yet fans are now talking a great deal about sports, after an initial, sharp drop in March. 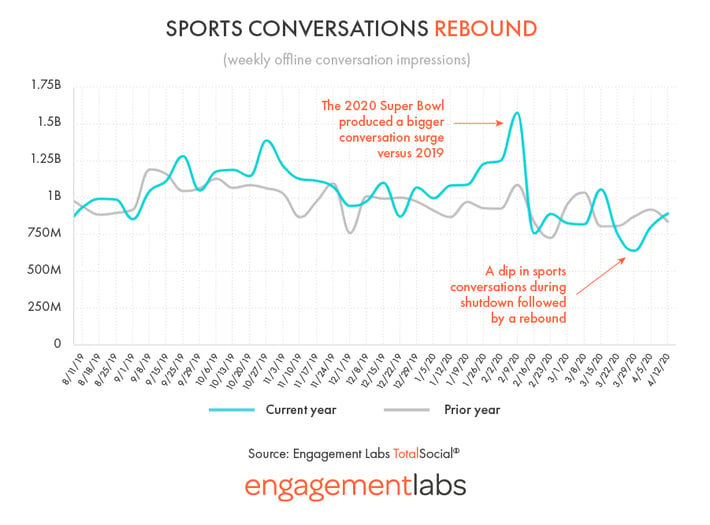 The National Basketball Association is gaining the most conversation compared to a year ago, with an increase of more than 28 million instances of people being in an NBA conversation. Also rising in terms of conversation levels of a year ago are the NFL, which is ramping up toward a much-anticipated draft in April, Major League Soccer, and even Major League Baseball, despite the comparison of a suspended season this year versus last year’s Spring Training and Opening Day.

The one sport that’s down dramatically is NCAA sports, with the total loss of the March Madness men’s and women’s basketball tournaments at the very moment when many states were announcing their shutdowns to try to slow the spread of the COVID-19 coronavirus. 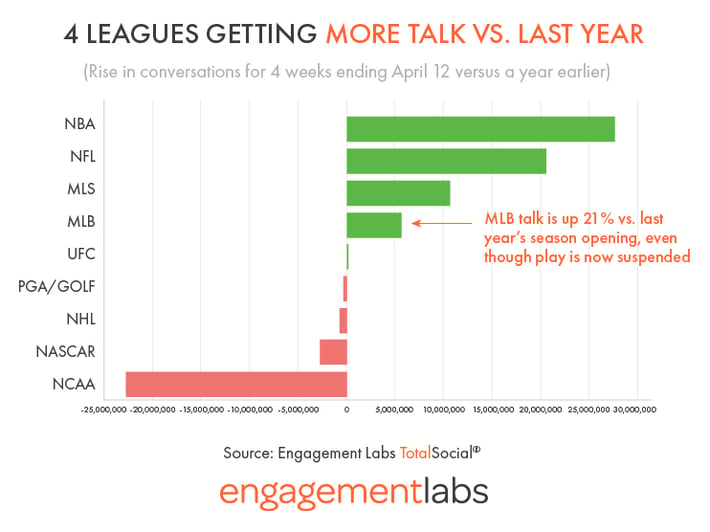 One reason that the NBA is doing well now is the league’s decision to offer a classic HORSE tournament played with social distance on the courts of popular all-stars including Chris Paul, Trae Young, and Allie Quigley.  Clear peaks in NBA conversations coincide first with the sudden announcement of the league’s suspension of regular play, and then the announcement of the HORSE tournament. 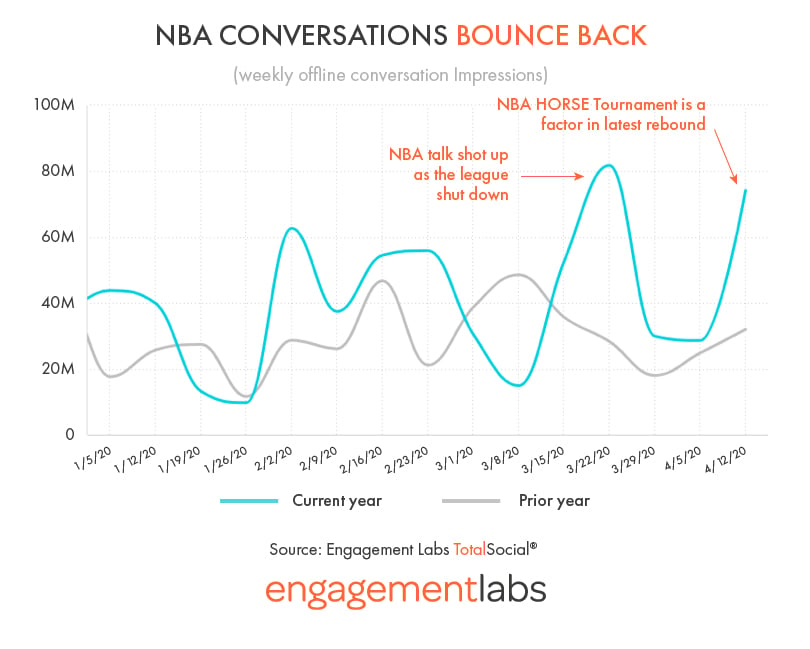 The NBA 2k video game is also a big winner in terms of conversation, with about 23 million more conversation impressions during the 4 weeks that ended April 12 versus the same time last year. Lots of other video games are up as well—Minecraft, Call of Duty, Fallout, and Madden—as the technology substitutes for the competitive instincts of American consumers. 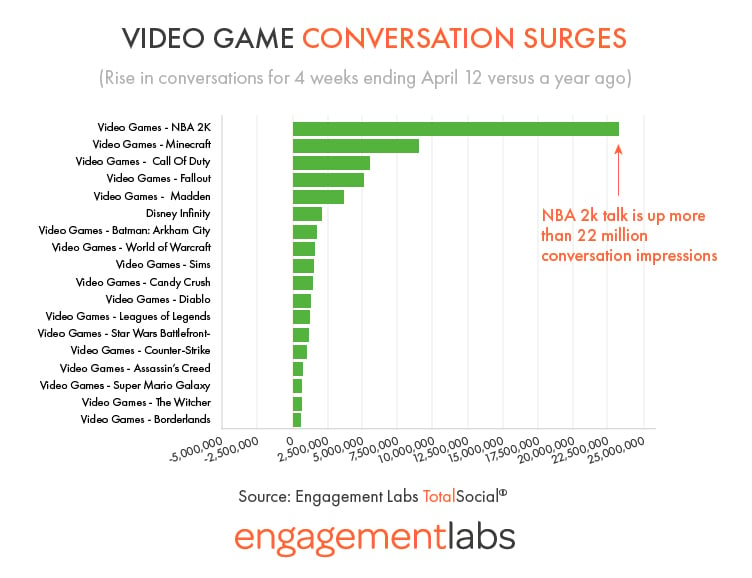 While talk levels are rising for sports, there’s evidence that much of it consists of disappointment about its absence. A year ago, 71% of conversations about the MLB was positive and just 3% was negative. This year, the negative has grown by 7x to 23%, while positive is down to 42% and 27% is “mixed”—both positive and negative.

Further evidence of the hungering for sports is the WWE and its 2020 Wrestle Mania on April 4-5.  This year talk about WWE and wrestling was 3x what it was the week of Wrestle Mania last year. We also saw a significant build-up in talk about WWE in mid-March when they announced they were moving SmackDown and holding it without a live audience.

Conversation patterns clearly demonstrate American sports fans are desperate for the return of sports—in whatever shape it comes. Players in front of empty arenas, playing backyard versions of their games, or even virtual versions are likely to be well received by fans trapped on their couches at home, and eager for the most popular conversation currency in the nation—last night’s game, with a healthy dose of talking smack.

If your company has a COVID team at work and we can assist with unique data (offline as well as online social intelligence), or if you wish to discuss the impact of the coronavirus on your brand or your category, we invite you to reach out to us.