But Nike Should Benefit from Higher Brand Engagement

Was Nike terrible, arrogant, or brilliant to launch a new “Just Do It” campaign featuring the controversial former NFL player Colin Kaepernick, who is famous for protesting social injustice during national anthem ceremonies on television? The answer has to do with understanding several critical marketing principles: Know your market; be relevant; engage consumers. On these dimensions, Nike is winning.

Superficially, Nike has reason to worry.  Engagement Labs monitors conversations about brands that occur online in social media, as well as offline, usually face-to-face and over the kitchen table, at a water cooler, in a health club.  We’ve seen negative trends in both kinds of conversations for Nike.

So, is Nike in trouble? Not necessarily.

The other key factor is the level of engagement with the brand.  The number of conversations happening about Nike in the campaign’s first week blew up, offline and online.  In social media, the number of mentions that week hit over 4.5 million, compared to a typical week of about 200,000 mentions.  Offline grew dramatically also, up to about 130 million from a more typical 90 million. 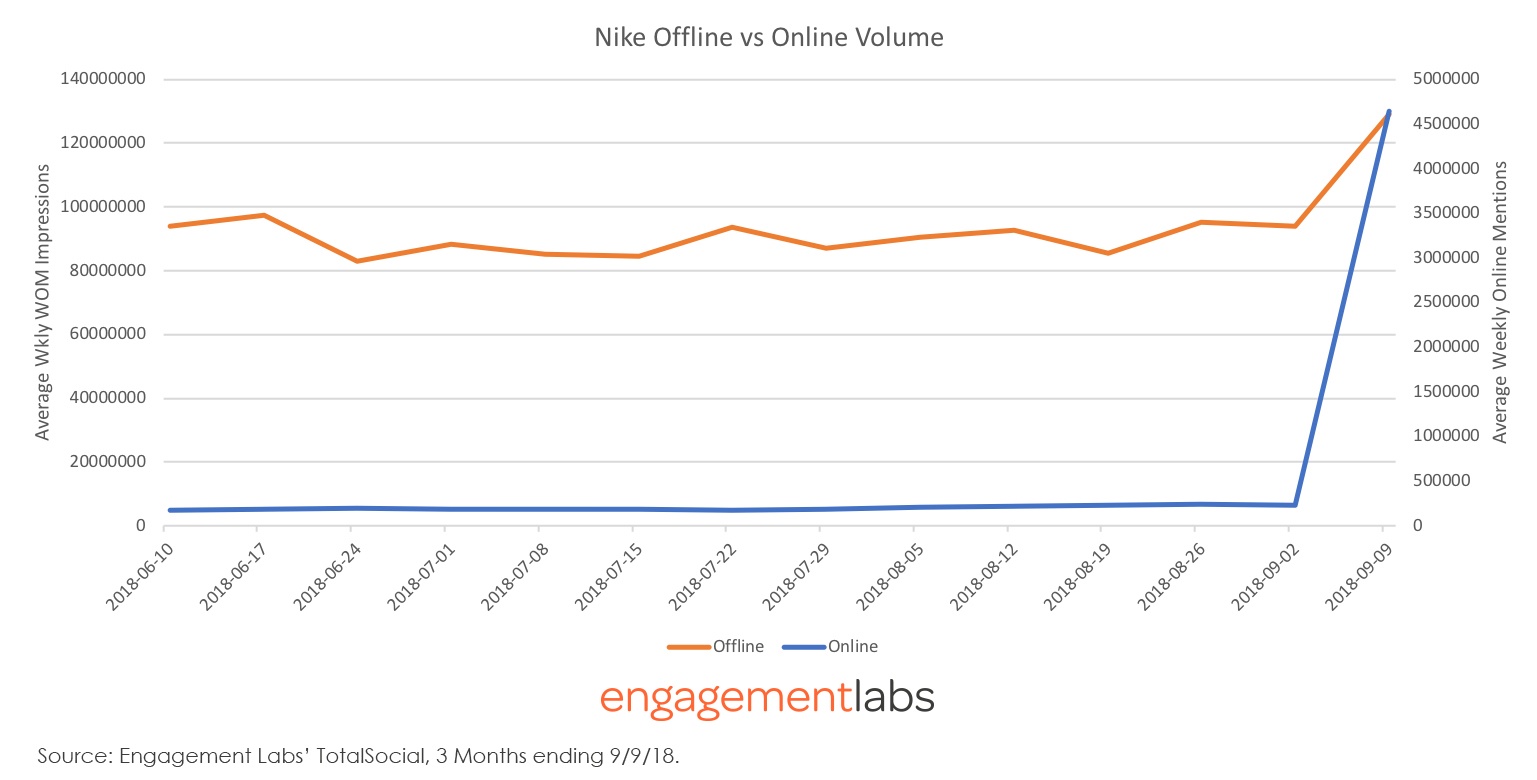 Nike’s share of negative conversations grew even more, but there’s an argument to be made that the higher engagement, including higher positive engagement, is worth some blow back, particularly if some of those people complaining are not among Nike’s core target audience, which is young, urban, and diverse. Our offline data suggest that, in fact, the negative conversations were from older, white, Republican-leaning consumers who normally don’t talk about Nike—or buy is products.  Nike, in fact, has a strong track record of understanding its core, youth market.  Our recent report on Generation Z found that Nike was one of the only apparel brands gaining traction with today’s teenagers, prior to the new campaign, and that today’s teens are more focused than other consumers on social justice among other political topics.

To understand the logic behind Nike’s bold new campaign one must recognize the brand knows its target consumers very well; it also knows how to renew its relevance to each successive generation of American consumers. Most of all, Nike has a knack for engaging consumers. In our view, the best measure of engagement is conversation—online and offline—and in that sense Nike has scored big.