Perdue Chicken Scalded in a Twitter Fight Between Nicki & Miley

We’ve been writing about the large differences between consumer conversations that happen online and offline, as measured by the Engagement Labs TotalSocial® platform. It’s hard to find an example more extreme than the Twitter “beef” involving the Perdue Chicken brand that erupted in late June between Nicki Minaj and Miley Cyrus. For the week ending July 7, Perdue still had an impressive offline sentiment score of 85.7 (out of a possible 100) versus an online score of 0, one of the biggest sentiment gaps we’ve seen between conversations online and offline.

As part of a long-running feud between the two pop stars, Minaj name-called Cyrus a “Perdue Chicken,” the precise meaning of which remains unclear.  The result was a dramatic rise in online media mentions of the Perdue brand to nearly 15,000 per week versus the usual of fewer than 100. Unfortunately, the tone of those conversations was rather negative. 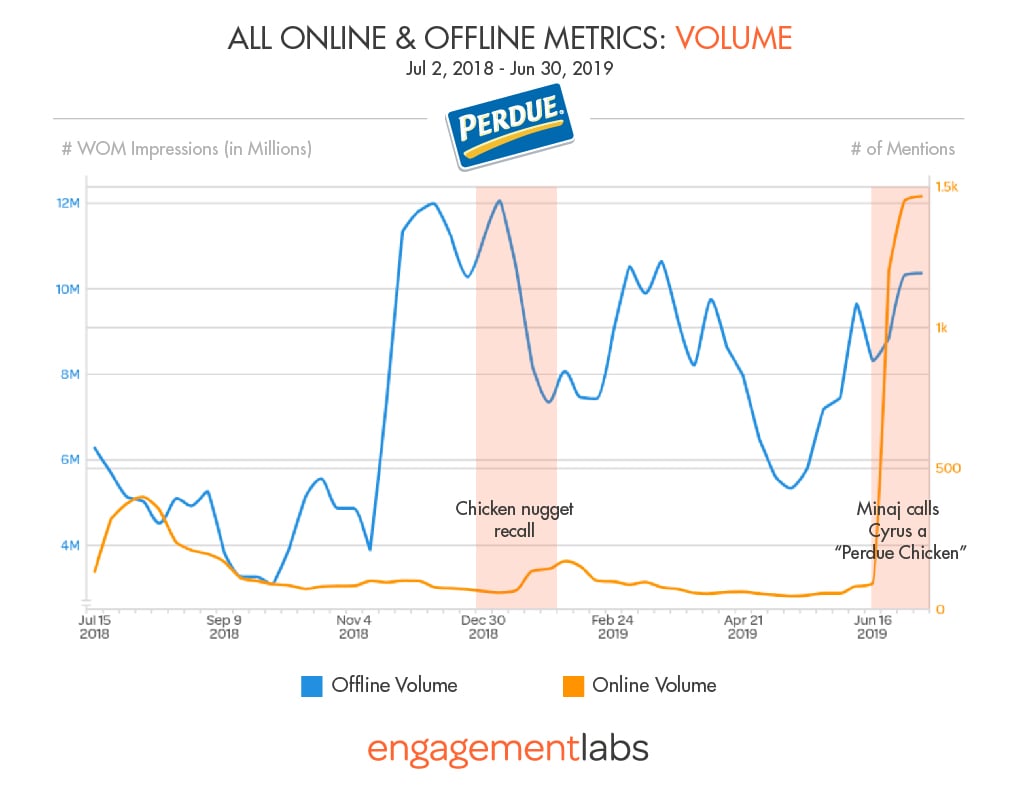 Trying to make the best of things, Perdue’s marketing team gamely interjected “thanks for the mention @NICKIMINAJ, but we don’t know nothing about beef.” Despite the clever reply, online net sentiment for the brand sank for two consecutive weeks.  But importantly, offline net sentiment did not seriously veer off its steady upward march dating back to early January.

In fact, Perdue’s online net sentiment has been volatile for an entire year—hitting stratospheric heights this spring and last summer, while hitting a sharp low in January, during a major recall of Perdue Chicken Nugget products.

That January product recall incident was the one time when both online and offline sentiment moved significantly in the same direction, while volume also rose.

The lesson seems to be that when online brand conversations move sharply in a negative direction due to pop culture dust-ups or politics—as we have seen repeatedly during the Trump era—brands are rarely hurt in a durable way.

But when social media outrages are related to a brand’s real-world performance—such as product recalls, customer service errors, or appearing to prioritize profits over people—then brands face more serious risks.  As we’ve shown in the MIT Sloan Management Review, online and offline conversations can have a major impact on brand sales, but online and offline are rarely correlated.  That’s why it’s so important for brands to mindful of all types of conversations—online and offline—in order to separate the signal from the noise of social media.