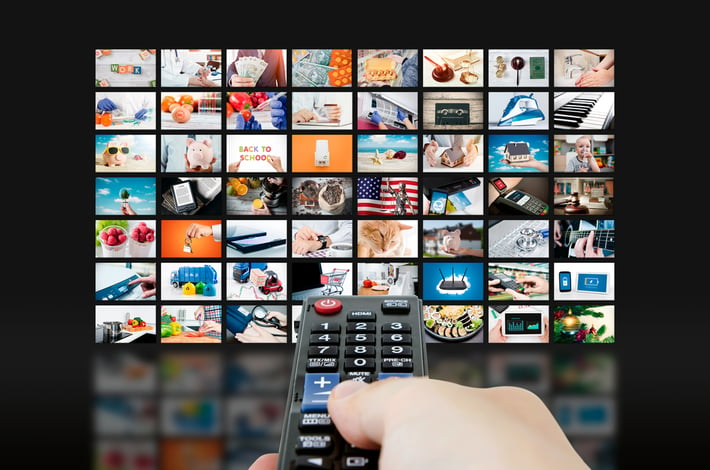 Over the course of the COVID pandemic, no sector has seen a greater rise in conversation than media and entertainment, as people shared their favorite recommendations for ways to entertain themselves and their families. Over the last year, we’ve seen the media and entertainment as one of the most dynamic category during the pandemic as consumer conversations about the leading streaming media services or over-the-top content platforms (OTT) dramatically increased as movies and movie theaters were shut down, and COVID limited other forms of recreation and entertainment.

A slew of new brands entered the streaming services market last year and 2021 such as Disney+, Peacock, Apple TV+, HBO Max, Paramount+, and Discovery+ to name a few and people were seeking and sharing their experiences with family and friends.

Against that backdrop, here are the top performing media and entertainment brands in Q3 2021 as measured by both their offline and online TotalSocial performance. Three things stand out. 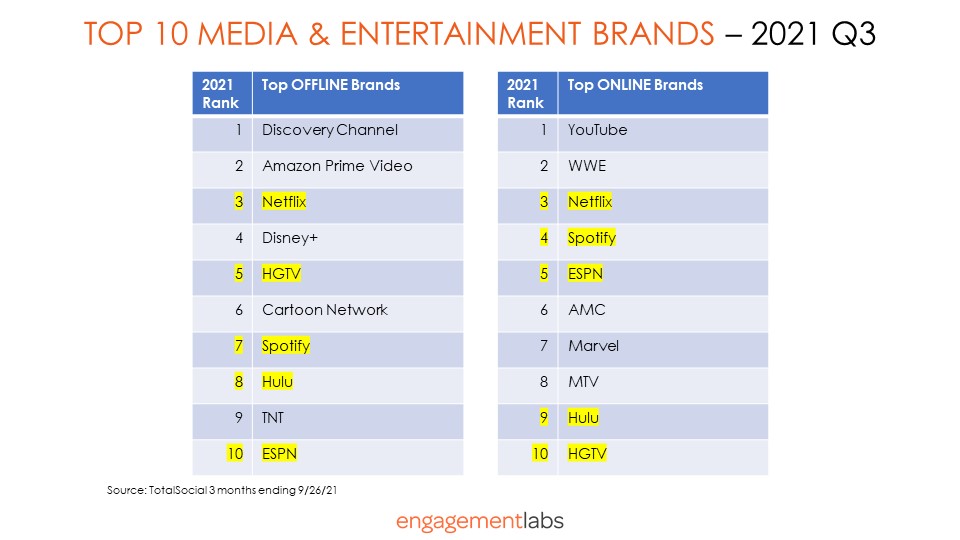 (Yellow highlights indicate brands that are on both lists.)

Discovery Channel takes the top spot in our offline ranking, while YouTube is the online winner.

Discovery is one of five cable networks in the offline top 10, joined by HGTV, Cartoon Network, ESPN and TNT. Amazon Prime Video is #2 offline, and is joined by streaming/OTT brands Netflix, Disney +, Spotify and Hulu in the top 10.

The online Top 10 is also a split between streaming/OTT services and cable networks. Joining YouTube are three other streamers: Netflix, Spotify, and Hulu. Meanwhile, there are six non-streaming services lead by WWE (#2 overall), ESPN, AMC, Marvel, MTV and HGTV.

Also notable is the fact that five of the top 10 are on both the online and online lists: Netflix, HGTV, Spotify, Hulu and ESPN. As TotalSocial has demonstrated, strong offline and online performance are each important to business outcomes, and thus these five are to be congratulated.

These five are top 10 performers offline but not online: Discovery, Amazon Prime Video, Disney+, Cartoon Network and TNT; these five are in the top 10 online but not offline: YouTube, WWE, AMC, Marvel and MTV. Each would benefit from strategies to build on their strengths and improve where they are not yet among the top performers.

Comparing the current rankings to Q3 a year ago, seven of the top 10 offline were top performers in both years: Discovery Channel, Amazon Prime Video, Netflix, Disney+, HGTV, Spotify and Hulu.  This consistency is notable, especially in an era of such big change in the media landscape and the consumer marketplace more generally.  Newcomers to the offline top 10 in Q3 are Cartoon Network, TNT and ESPN. Marvel, Nickelodeon and YouTube are no longer in the offline Top 10. 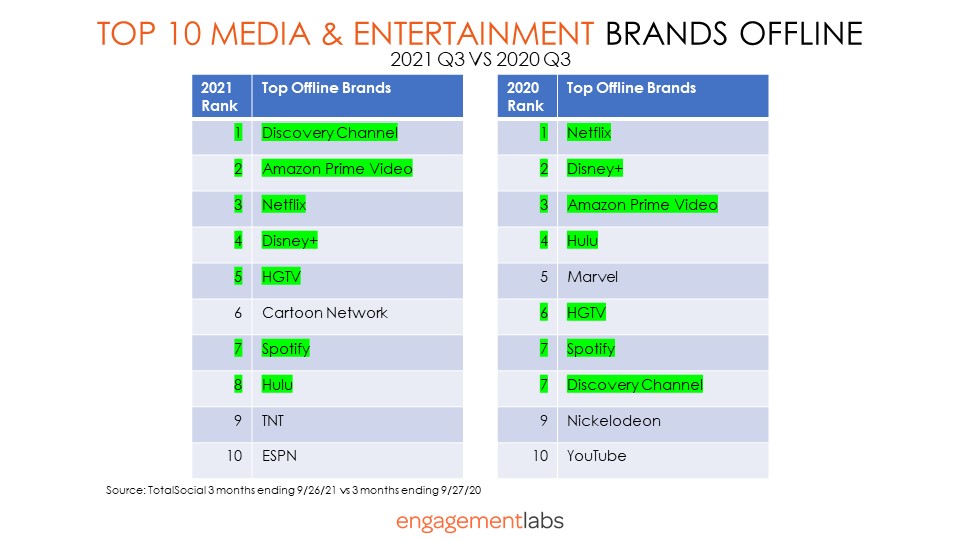 (Green highlights indicate brands that are on both lists.)

Six of the top 10 online were also top performers a year ago: WWE, Netflix, Spotify, ESPN, MTV and HGTV. New to the online leaders list in Q3 2021 are YouTube, AMC, Marvel, and Hulu. Food Network, Amazon Prime Video, CNN and Disney+ have fallen from the Top 10.

(Neon blue highlights indicate brands that are on both lists.)

Why does this matter? This affects not just marketers in the media entertainment category but all brands that advertise. Conversations among consumers drive about 19 percent of purchases, according to our paper published in the MIT Sloan Management Review, including conversations that are triggered by paid advertising—we find that one-quarter of the impact of advertising on sales occurs by causing consumers to talk about the brand.

To be successful, brands should develop a holistic social strategy. Start by understanding what consumers are saying about your brand both online and offline, what is driving those conversations and how they are different.

Our patented “TotalSocial” Scorecard analysis takes a deeper dive into the drivers of your brand's social influence. It is customized for your brand and provides valuable insight on your position, and competitive threats. Sign up and we will provide you will a complimentary social influence briefing.